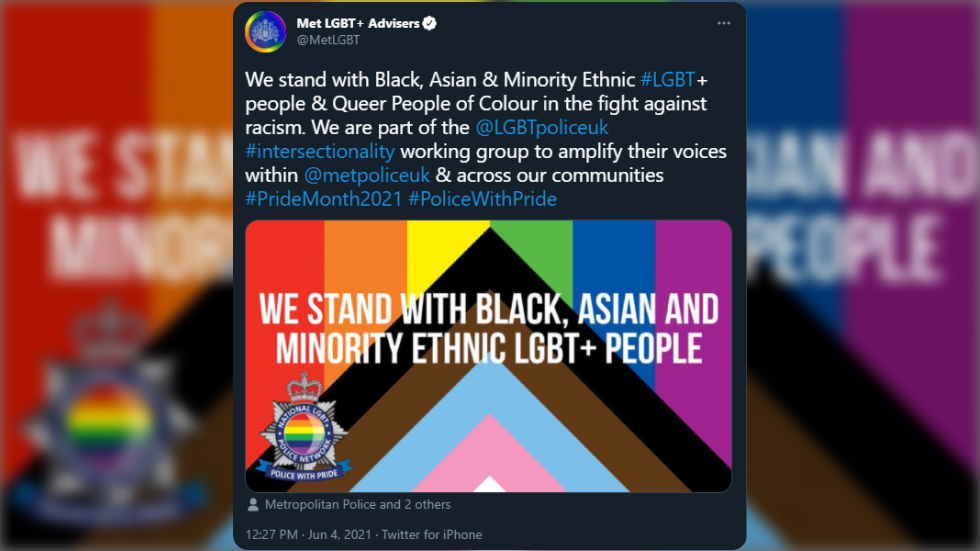 The Met Police received heavy criticism after it made a post praising “intersectionality” and “Queer People of Colour in the fight against racism” – with concerned Brits calling on police to tackle knife crime in the city.

On Friday, the official Twitter account for the Metropolitan Police’s LGBT+ advisers published a pro-LGBT pride message, which featured a rainbow flag with extra colour stripes to represent transgender and black people.

“We stand with Black, Asian & Minority Ethnic #LGBT+ people & Queer People of Colour in the fight against racism,” read the post.

“We are part of the @LGBTpoliceuk #intersectionality working group to amplify their voices within @metpoliceuk & across our communities.”

Though the post received 67 likes, Met Police received hundreds of complaints, with many Brits pointing out that there is currently a knife and machete crime problem in the capital city.

“Any chance of catching the machete gangs in my neighbourhood?” questioned one user, while another asked whether the “rampant knife crime” had “all been sorted now.”

“Messages like this don't make gay people or minorities feel safer. They just make you look stupid, and make everyone feel less safe, because they give the impression the police is more interested in activism than police work,” another person protested.

Others called on the Metropolitan Police to “just fight crime,” calling its post “virtual signalling nonsense” and “divisive,” and questioning why white LGBT people had been excluded from the statement.

Workers Party of Britain founder and RT host George Galloway advised the police to “get a grip.”

UK police departments have long been criticised for their LGBT outreach attempts. In 2018, a Greater Manchester Police officer was mocked for wearing a bizarre rainbow bumble bee costume for Pride, while in 2017, Sussex Police received complaints for spending £750 to give two police cars a rainbow Pride makeover – despite heavy police cuts.

A report last year showed that 21 police forces in the UK spent nearly £100,000 on rainbow-decorated Pride merchandise alone between 2017 and 2020.