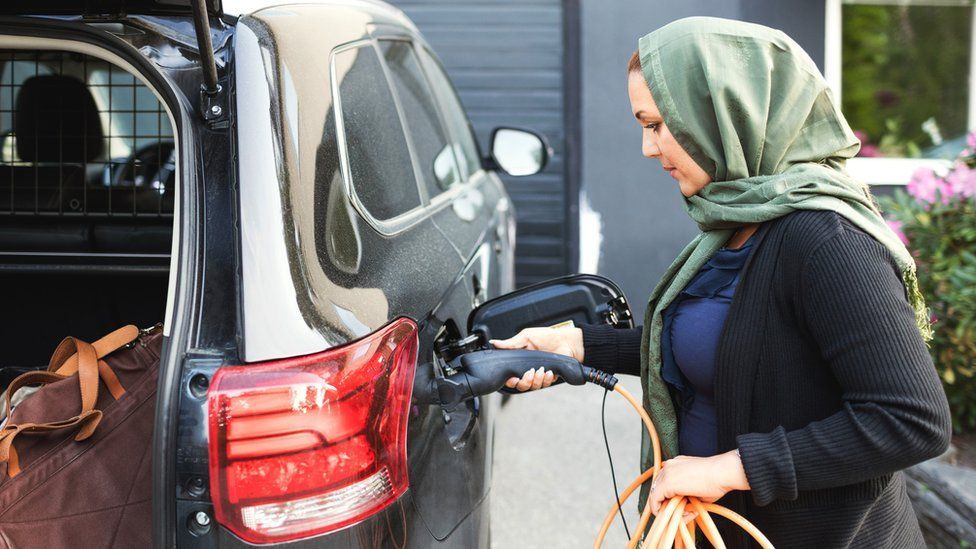 Fuel prices: Could I save money driving an electric car?

There are nearly half a million electric cars in the UK, and rising fuel prices have prompted more people to consider making the switch.

The government is banning the sale of new petrol and diesel cars from 2030, a decade earlier than originally planned.

It unexpectedly cancelled its electric vehicle (EV) grant for cars with immediate effect, arguing it was having "little effect on rapidly accelerating sales".

What does it cost to charge an EV?

Filling the tank of a 47-litre family hatchback with petrol now costs about £85, or £88 for diesel.

Despite recent energy price increases, charging at home to deliver the equivalent mileage typically costs less than half of that - about £41.

But drivers typically do a mix of 70% charging at home and 30% at public chargers, according to the Energy Saving Trust.

How much do electric cars cost to buy?

The price difference between electric cars and traditional vehicles is narrowing, and is expected to largely disappear.

But for now, a typical new electric car remains more expensive than an equivalent petrol or diesel model - ranging from £23,000 to £43,000.

Leasing offers another option. According to Leasing.com, the demand for EVs in 2021 was greater than for diesel or petrol cars.

It says the current average monthly payment for a five-seater hatchback is less than for the diesel equivalent:

What about other costs?

Depending on the model and age of your EV, you may be entitled to a reduction in vehicle tax or be exempt. Some councils waive residents' parking fees for EVs. Electric cars also don't have to pay the London congestion charge.

Electric cars typically require less ongoing maintenance than petrol or diesel cars, but EVs do need to have annual MOTs after three years.

How long does it take to charge EVs?

This depends on the model and the speed of the charger. 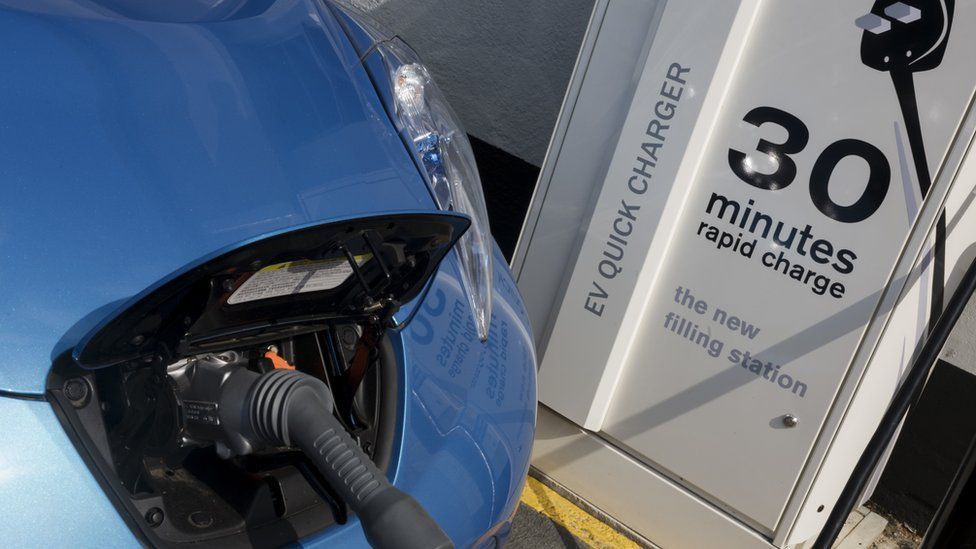 Rapid chargers allow drivers to "refuel" in less than an hour

It can take between six and 12 hours using a slow home charger, or 20 to 40 minutes with a rapid public charger.

These let you charge quickly, or in the middle of a longer journey.

Where can I charge my electric vehicle?

There are currently 30,373 public chargers in the UK, but they operate at different speeds, and are distributed unevenly across the country.

London has more than twice as many as any other region - with one charger for every 824 people, whereas Wales has one charger per 2,696 people. 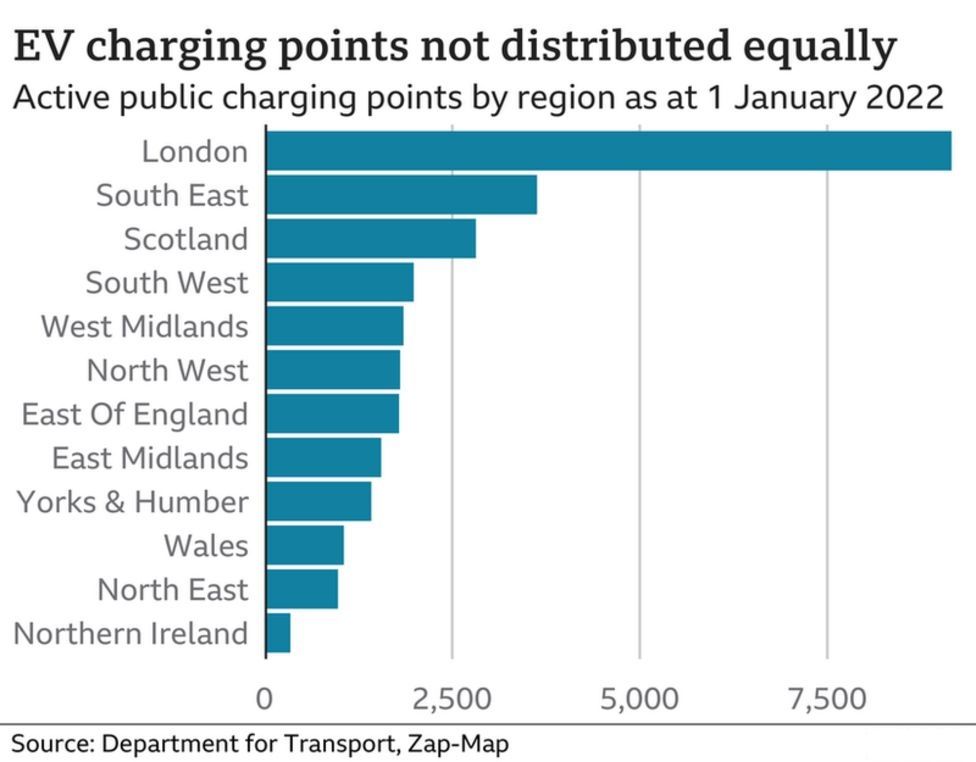 The UK has more rapid chargers than any European country, according to electric charging company Virta.

But according to the Society of Motor Manufacturers and Traders, public chargers aren't always sufficiently reliable or accessible.

As part of its EV strategy, the government plans to increase the number of chargers ten-fold by 2030.

However, only 800 new chargers are currently being installed every month. This would need to increase to 2,500 to meet the target.

How many miles can you get from a full charge?

On average, the five best-selling EVs in the UK can travel more than 200 miles on a full charge.

This is the same as travelling from Bristol to Leeds, or London to Swansea.

However, batteries deteriorate with use, which reduces their performance - typically by about 9% over the battery's lifetime.

Providers such as Nissan and Tesla guarantee their batteries for up to eight years or 100,000 miles.

What are the different charging plugs?

Unlike the standard fuel nozzles used to deliver petrol and diesel, there are five different plug types for electric vehicles. 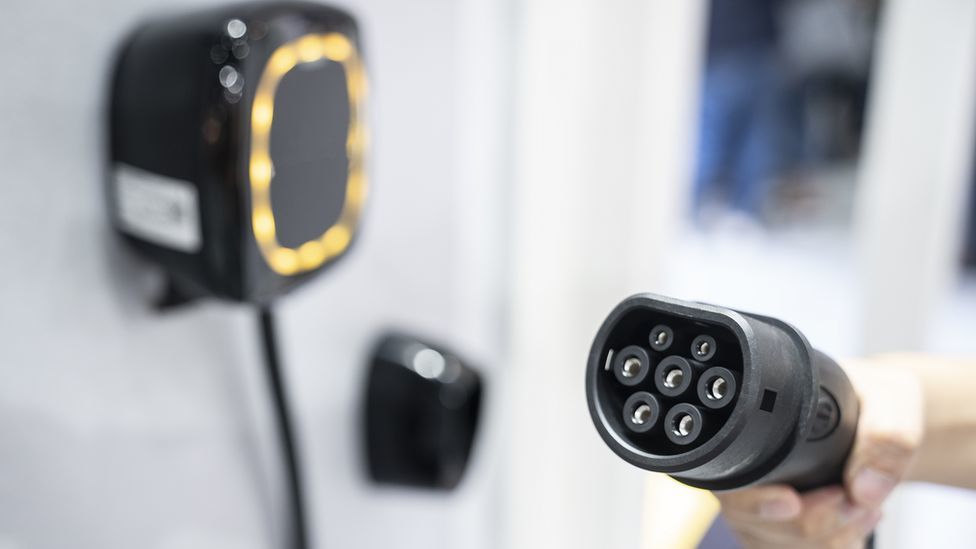 The type 2 plug is the most common in the UK, and can be connected to slow or rapid chargers.

And new EV models have an extra connector to use use a rapid charger.

Drivers also need a dedicated home charging unit, costing between £550 and £1,100. A normal three-pin plug socket will work in an emergency but will be much slower.

Are EVs better for the environment?

Because of the different minerals required, manufacturing an EV creates more greenhouse gas (GHG) emissions than a diesel or petrol vehicle.

But driving an electric vehicle in the UK produces only a quarter of the GHG emissions of a diesel car, and less than a fifth of those of a petrol model.

Given this, the BBC calculates that an EV's environmental impact will be lower than that of a petrol car within 18 months of ownership, or two years for a diesel car.

The carbon emissions generated by running the car depend on how the charging electricity is produced.

As the UK produces more of its electricity from renewable energy, EVs will produce even fewer carbon emissions per mile.

This is crucial as the UK is trying to reduce its emissions to net zero by 2050: cars and vans are currently responsible for 15%.

Another key issue is the materials required for EV batteries, and how these are disposed of when dead.

At the moment, it's estimated that only 5% of batteries are recycled, but major manufacturers have committed to improve this.