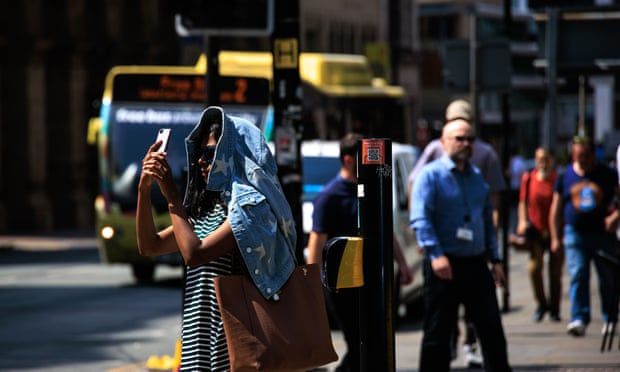 From transport to zoos: how UK services coped in the sweltering heat

Train services were cut and some schools closed, while water firms experienced ‘unprecedented demanded’ as Britain tried to stay cool

Train services have been cut, flights have been grounded and schools closed as temperatures soared into the high 30s in a heatwave stretching across England and Wales.

Temperatures hit 38.1C in Santon Downham, Suffolk, and 37.4C in Kew Gardens, west London, making it the hottest day of the year. Wales recorded its highest ever temperature, with the mercury creeping up to 35.3C.

Here, we take a look at the impact of the heatwave.

Planned surgeries were cancelled and IT servers required additional cooling across NHS trusts.

“The NHS estate is not built to cope with extreme weather. Over the past 48 hours we have heard that some trusts are having to scale back the number of planned surgeries as operating theatres are getting too hot,” said Miriam Deakin, interim deputy chief executive at NHS Providers, the organisation that represents hospitals.

“We have also heard that IT server rooms need additional cooling in buildings where the air conditioning is already overstretched.”

The health secretary, Steve Barclay, confirmed that the emergency services were starting to see increased volumes of calls on Monday afternoon, but said extra resources had been put in place to manage the surge.

NHS Digital revealed that visits to the heat exhaustion section of the NHS website had increased by 525% in the past week. But overall, the NHS’s top doctor praised staff for keeping services running despite the soaring temperatures.

NHS medical director Prof Sir Stephen Powis said: “Thanks to the hard work and innovation of NHS staff, the overwhelming majority of NHS services are continuing to run despite the unprecedented heatwave.”

Rail, road and air were all affected by the high temperatures. Luton airport was temporarily forced to stop flights after a runway defect.

Hundreds of trains were either severely delayed or cancelled after speed restrictions were put in place from midday on Monday across Britain. Network Rail warned that the worst was yet to come, with high overnight temperatures forcing the slow running of trains throughout Tuesday. 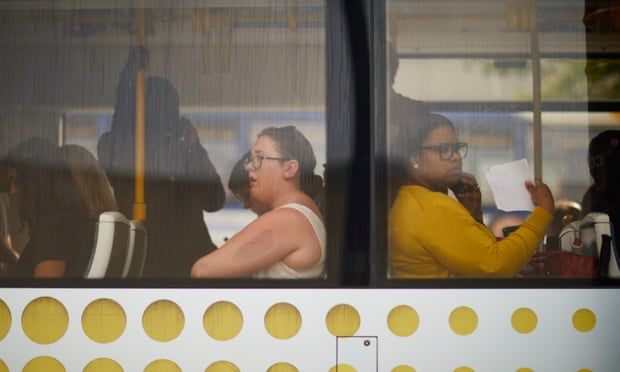 A tram passenger fans herself to keep cool in Manchester.

Services on major intercity lines were running at half speed in the heat, while the east coast mainline from London to York and Leeds will be closed on Tuesday. Parts of the London Underground and Overground were also closed.

Passenger numbers were down by about 20% on rail and on the Tube on Monday morning as people heeded advice not to travel even ahead of the worst disruption.

Some local authorities sent out gritters, a sight synonymous with icy conditions, to mitigate the effects of melting road surfaces.

At least 100 schools across England were closed due to high temperatures on Monday, with many expected to remain shut until Wednesday to avoid the worst of the heatwave. More than 50 schools in Buckinghamshire alone closed their doors, and there were further closures in Hampshire, Nottinghamshire, Oxfordshire, Berkshire, Sheffield, Lincolnshire and Cambridgeshire.

While schools are closed, some children have seen a return to online lessons, a reminder of remote education during lockdown. At Dr Challoner’s grammar school in Buckinghamshire, headteacher Alan Roe said the school building would be closed but work would be set via Google Classroom on Monday and Tuesday. “We expect to be open as normal until 12.30pm on Wednesday 20 July,” he added.

Elsewhere, school sports days were cancelled, school trips postponed and uniform codes for both pupils and staff relaxed. On Monday morning “PE kit” was trending on Twitter, as schools took steps to try to keep children as cool as possible in the heat. Many schools in London and elsewhere closed early to avoid the heat in the afternoon, while some parents chose to keep their children at home.

Kevin Courtney, joint general secretary of the National Education Union, expressed concern that Ofsted inspections were going ahead despite the extreme conditions.

Ofsted responded: “If providers remain open, we will continue to inspect. However, if providers have concerns about the timing of their inspection, they can request a deferral and we take all reasonable factors into consideration.”

Many employees worked from home to avoid difficult journeys and overheating offices.

Figures published by the location technology firm TomTom showed the level of road congestion at 9am was lower in most UK cities than at the same time last week.

In the House of Commons, MPs debated whether a maximum temperature limit should be introduced for workplaces to protect employees.

Water companies have been experiencing “unprecedented peak demand”. People are being encouraged to “carefully consider” their water usage, and urged not to waste it in the high temperatures.

Water UK said the “most intense demand” was across the south of England, but that “pretty much all companies are seeing elevated demand at the moment”.

The industry body has members across England, Scotland, Wales and Northern Ireland. 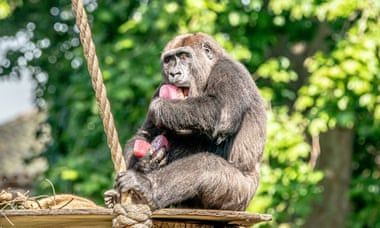 Zoos across the UK took novel steps to keep their animals cool, with some offering ice lollies while others closed to the public.

Chester Zoo closed its doors for “the safety of our staff, visitors, animals and plants”, while animal parks like Colchester, Bristol and ZSL London Zoo gave animals frozen treats, such as ice lollies filled with vegetables or mealworms.

Police officers in northwest London had to smash the window of a vehicle in the car park of the RAF museum in Hendon to release a dog.