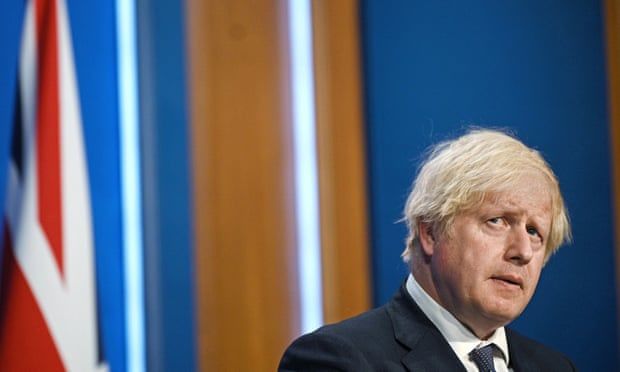 From freedom to caution: a week of mixed messages on Covid reopening

Analysis: little has changed since last week’s announcement but the mood music is very different
It was the comedian Matt Lucas who best captured the jarring ambiguity in Boris Johnson’s broadcast to the nation last May, as restrictions began to be lifted after the first lockdown. In a much-watched video, Lucas parodied it as: “Don’t go to work; go to work; don’t take public transport; go to work; don’t go to work; stay indoors …”

Dominic Cummings, Johnson’s embittered former adviser, has since put it even more cruelly, comparing the prime minister’s approach to managing the pandemic to “a shopping trolley smashing from one side of the aisle to the other”.

After a week in which ministers have lurched from promising freedom to urging caution, even some senior Conservatives privately acknowledge that the messages emanating from the government in recent days have been almost as baffling.

Last Monday the new health secretary, Sajid Javid, told MPs boldly that “freedom is in our sights once again”. His statement setting out the government’s plan to lift almost all formal Covid restrictions was so well received by Tory backbenchers that one was heard to cry “hallelujah”.

Johnson did warn the public at last week’s Downing Street briefing that it was not time to be “demob happy” and stressed that he would keep wearing his mask in certain circumstances out of politeness. But the overall tone was of blessed release. He proudly suggested the new approach was a shift from “government diktat” to relying on “personal responsibility”.

As the week went on, however, some of the practical risks with that approach became more evident. Javid conceded that pressing ahead with unlocking could mean 100,000 a cases a day, which adds up to millions of people self-isolating, at least until the rules are changed on 16 August.

Ministers responded by announcing they would tweak the NHS Covid app to reduce its sensitivity – a move the Labour leader, Keir Starmer, compared to taking “the batteries out of the smoke alarm”.

With distress signals already beginning to go up from various parts of the NHS, there were also growing jitters about what would happen if the public read the scrapping of rules on masks and social gatherings not as a welcome return to personal responsibility but the green light for a summer free-for-all.

Meanwhile, the glee of Conservative backbenchers who have long railed against restrictions appeared not to be shared by the wider public, if polling is anything to go by.

And so it was that by Monday’s press conference, Johnson was stressing “this pandemic is not over” and underlining the need for “extreme caution”.

Little has changed in concrete terms since last week’s announcement – masks will still not be mandatory from 19 July, nightclubs can still reopen and mass events can go ahead – but the mood music is very different, and the risks more openly acknowledged.

And Javid appears to have shifted within just a fortnight or so from boldly asserting after he replaced Matt Hancock that “it’s going to be irreversible. There’s no going back”, to refusing to rule out reimposing restrictions if things get tough in the winter – perhaps in the face of alarming projections from Sage.

The chief medical officer, Chris Whitty, stressed at Monday’s press conference the importance of “going very slowly through this step”.

Last spring, ministers were consistently surprised by how well the public complied with the detailed and draconian rules governing their everyday lives. Much now will depend on how they now shoulder the responsibility of judging the risks for themselves. And that may depend in turn on which of the government’s mixed messages they have heard loudest.
#Boris Johnson  #Johnson  #Covid
Add Comment