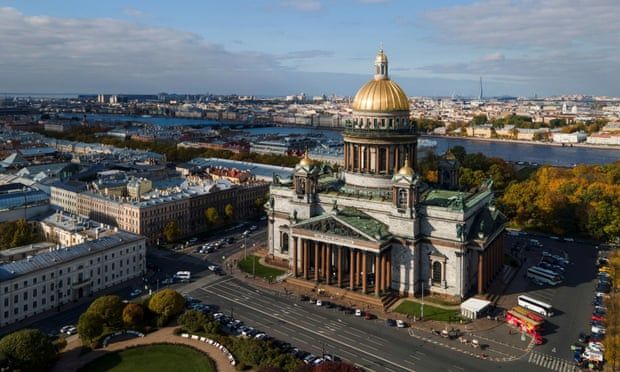 But Canterbury remains twinned with Vladimir, 120 miles east of Moscow. A spokesperson for Canterbury city council stressed that the arrangement had nothing to do with the council and was the sole responsibility of the Canterbury Three Cities Association.

The association – which also links the city with Bloomington and Bloomington-Normal, Illinois – issued a statement condemning Russia’s actions in Ukraine. But it added: “We believe that to sever links with Vladimir now would be a pointless gesture, of no help whatever to the beleaguered people of Ukraine.”

For 36 years Glasgow had been twinned with the Russian city of Rostov-on-Don, 80 miles east of the Ukrainian border. But hours after the invasion the arrangement was suspended by the council leader, Susan Aitken. She said: “While this is a small thing in the circumstances, Glasgow must join the world in unequivocally condemning the acts of war unleashed on Ukraine by Russia.”

A day after the invasion, Cheltenham suspended its twinning activities with the Black Sea resort of Sochi. A day later Manchester suspended its “friendship arrangement” with St Petersburg that had gone back to 1962.

County Durham ended 54 years of links with Kostroma, 250 miles north-east of Moscow, in early March. After a week of pressure, on 4 March Oxford city council suspended its twinning with the Russian city of Perm, near the Urals.

Exeter city council voted unanimously to suspend civic links with Yaroslavl, 160 miles north-east of Moscow, on 11 March. And there was similarly unanimous vote in Perth and Kinross council to end Perth being twinned with the north-western Russian city of Pskov.

Last week Plymouth said it planned to end its twinning arrangement with the Black Sea port of Novorossiysk after residents of the city’s Novorossiysk Road replaced its sign with one reading “Volodymyr Zelensky Road” in tribute to the Ukrainian president.
Add Comment