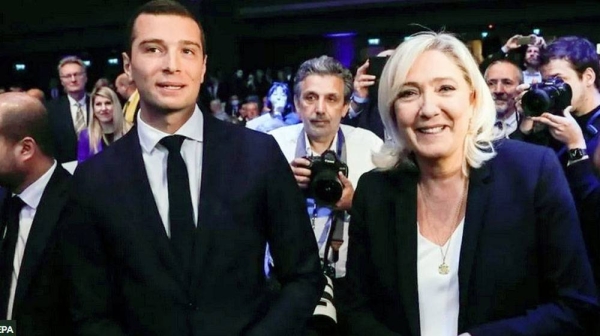 France’s far-right National Rally (RN) has confirmed 27-year-old Jordan Bardella as the replacement as party leader for Marine Le Pen.
Le Pen will focus instead on leading the party’s group in parliament, after it took 89 seats in the National Assembly earlier this year.

It marks the first time in its 50-year history that the RN has not been led by a member of the Le Pen family.

But the move does not mark a major change in direction for the party.

Marine Le Pen remains the source of real power and she is still the likely candidate in the next presidential election in 2027.

She told the party on Saturday that she was not disappearing from politics.

“I am not leaving RN to take a holiday. I will be there where the country needs me,” she said at the party convention.

Brought up in a poor family of Italian origin in the Paris suburbs, Bardella joined the far-right as a teenager and rose quickly to the top of the party, becoming its acting president last year.

He ran the RN’s successful 2019 European election campaign, and has since impressed even his enemies with his assertiveness in debates.

He is seen as loyal to Le Pen, telling AFP news agency recently that he is a “continuity candidate with the aim of building on the incredible legacy that Marine is handing over”.

His elevation to the party’s senior leadership is part of the RN’s efforts to soften its image and attract younger voters.

Like Le Pen he likes to portray himself as a new type of nationalist who has little in common with the racism and anti-Semitism of the party’s predecessor, the National Front.

However, critics say that these sentiments still exist within the party.

In the most recent controversy, a RN lawmaker was suspended for two weeks from the National Assembly for making an allegedly racist remark while a black member of parliament was speaking.

Le Pen stepped down as leader of the party last year so she could focus on her presidential bid, which she eventually lost in April in a run-off to President Emmanuel Macron.

Despite the defeat, she fronted the party’s parliamentary election campaign two months later in which the RN won 89 seats — a 10-fold rise and the party’s best-ever showing.

The success of the far-right and the left in those elections led to President Macron’s party losing its majority.
Add Comment