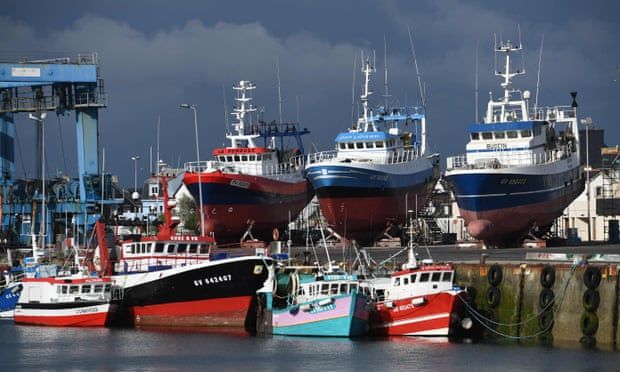 Clément Beaune, who is a close ally of the French president, Emmanuel Macron, said action would be decided on within days and discussions were already in motion.

France’s prime minister, Jean Castex, echoed the sentiment, telling the national assembly that the EU had to be firmer with the UK. “The [European] Commission is moving, it must do more”, he said.

France has been consistently pushing the EU to take a stronger stance against the UK over its concerns that Boris Johnson’s government is acting in breach of its obligations over fishing access to Channel waters.

Last week a third of French boats applying to fish in Jersey’s waters were turned down by the island’s government. The previous week the UK government provided only 12 of 47 French vessels with permits for its coastal waters. The UK and Jersey authorities have said the vessels that had been turned down had failed to provide evidence of operating in the relevant waters.

Beaune said France “would not stand for it”. He said: “Enough already, we have an agreement negotiated by France, by Michel Barnier, and it should be applied 100%. It isn’t being. In the next few days – and I talked to my European counterparts on this subject yesterday – we will take measures at the European level or nationally to apply pressure on the United Kingdom.”

He added: “We defend our interests. We do it nicely, and diplomatically, but when that doesn’t work we take measures. The Channel Islands, the UK, are dependent on us for their energy supply. They think they can live on their own and badmouth Europe as well. And because it doesn’t work, they indulge in one-upmanship, and in an aggressive way.”

The UK is a net importer of energy from French nuclear power stations. Paris has previously suggested it could cut the supply to Jersey, whose energy it provides through undersea cables under a commercial contract between the French company EDF and the Jersey Electricity Company.

Under the post-Brexit trade and cooperation agreement struck on Christmas Eve, in case of a dispute with Jersey the EU can take unilateral measures “proportionate to the alleged failure by the respondent party and the economic and societal impact thereof”.

Unilateral measures affecting the energy supply to the rest of the UK would also theoretically be possible. But France would need to gain the consent of other member states in both cases and the action would need to be proportionate, as the UK would have the right to take the EU to arbitration after any such move.

Castex, talking to the French parliament, suggested that his government would be likely to instead take the option of appealing to an arbitration tribunal in the first instance, an easier sell to the fellow EU member states, or go it alone in suspending bilateral agreements with the UK.

He said: “We will use the arbitration panel of the agreement to force the British to respect their word. We will question all the conditions for the more comprehensive implementation of the agreements concluded under the aegis of the European Union, but also, if necessary, the bilateral cooperation that we have with the United Kingdom in many areas.”

The trade and cooperation agreement also creates a link between continued EU access to British waters until 30 June 2026 and the UK’s access to the bloc’s electrical grid and gas network.

The energy part of the agreement allows the UK virtually unchanged access but that expires on the same date as the deal on access, raising the spectre that this could be used as leverage. The level of fishing quota will be decided by annual negotiations after 2026.

A commission spokesperson sought to play down the row, adding that officials in Brussels were in “constant contact with the UK authorities to ensure that all licence applications are dealt with as soon as possible”.

The spokesperson said: “We took note of last week’s announcements, but regret that with the number of licences granted it still has not been possible to bring this issue to an end now.

“The UK has published their methodology and we are now discussing the differences with the British and Jersey authorities regarding the rights of the boats involved. On our side we will continue to engage in the interest of our fishermen and women so that further licences will be provided.”
#Boris Johnson  #Johnson
Add Comment