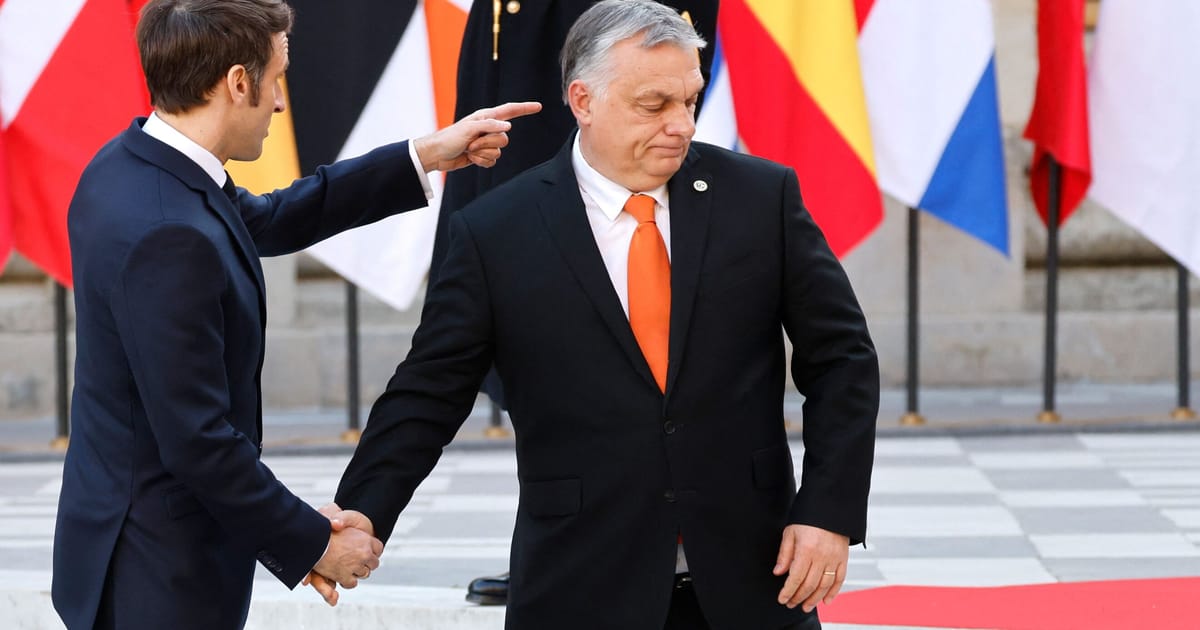 The EU's largest countries are extending a helping hand to the Hungarian government in its tussle with Brussels over rule-of-law breaches.

France and Germany, along with Italy, are leading a group of about 12 governments that are calling on the European Commission to review its decision to freeze €7.5 billion in funds for Hungary, arguing that the nation has made more progress on anti-corruption measures than Brussels recognizes.

Support from the bloc's most powerful countries casts doubt on the EU's overall commitment to penalize Viktor Orbán's government for the way it has restricted democratic freedoms. Finance ministers will discuss the matter on Tuesday and it could later become an issue for leaders to try to solve.

“Progress has been made by the Hungarian authorities, it should be noted," a French treasury official said. "A certain number of reforms have been undertaken — there are still additional elements that are expected."

The Commission proposed last week to maintain its freezing of EU funds after finding Hungary's achievements to protect the EU budget from fraud insufficient. “We have commitments, we have promises, but it’s not yet done," EU Budget Commissioner Johannes Hahn said at the time.

While there was understanding of the Commission's decision, questions surrounded the "proportionality of the freeze," the French official said.

This group of countries also thinks that if no new assessment is carried out, there may not be a qualified majority in the Council in favor of freezing the funds.

At a meeting of EU ambassadors last week, France and Germany did not agree with the Commision. They argue Orbán's government is delivering on the 17 anti-corruption reforms which it undertook to avoid the freezing of funds, and that this should be reflected by reducing the share of the freeze, currently equivalent to 65 percent of cohesion funds.

They are asking the Commission to undertake a fresh assessment with a later cut-off date than November 19, to include reforms that Orbán’s government has passed since then. It’s unclear yet whether the Commission will produce a revised assessment. "We will see, no formal decision [has been taken] yet," EU Economy Commissioner Paolo Gentiloni said on Monday.

This group of countries also think that if no new assessment is carried out, there may not be a qualified majority in the Council in favour of freezing the funds.

If no decision is taken by December 19, the sanctioning process would simply elapse with no funds frozen, something that would be seen as undesirable given that it's the first time the EU has used this instrument to rein in democratic backsliding in a member country.

"It would be a complete disaster," said a senior EU diplomat.

There are other considerations at play: Hungary is vetoing two key decisions, an €18 billion aid package for Ukraine, and a 15 percent minimum corporate tax rate on multinational companies — two files on which the EU has staked a lot.

The Ukrainian government urgently needs the aid package to balance its budget, with the EU coming under pressure from Kyiv and the United States to deliver the funds. The bloc has also been among the main proponents of the global tax deal, and risks losing face if this isn't concluded.

France and Germany's softer stance is likely to draw them into conflict with another group of countries, including the Benelux states, Denmark, Sweden and Latvia, which backs the Commission’s hardline assessment that the risks of graft remain in Hungary and all €7.5 billion should be blocked.

“We think the Commission is best equipped to assess this and we will follow the Commission for now,” a diplomat from this second group of countries said. “We do agree within the Council on principles, we’re only arguing on the extent” of funds to freeze.

Given these divisions, it's unlikely that the issue will be resolved on Tuesday, with the Czech presidency of the Council likely planning another meeting of finance ministers next week. Orbán could also escalate the issue to a meeting of EU leaders in mid-December.

European Parliament officials, who have long called for action from the Commission to sanction Orbán's democratic backsliding, are concerned that the Council would weaken the proposal.

"EU governments must not back down now," said Rasmus Andersen, a Green MEP from Germany. "Orbán can no longer get away with his blackmail attempts. We urge the member states to organize a majority which stands strong for the rule of law and against Orbán's attempt to weaken European solidarity and democracy."