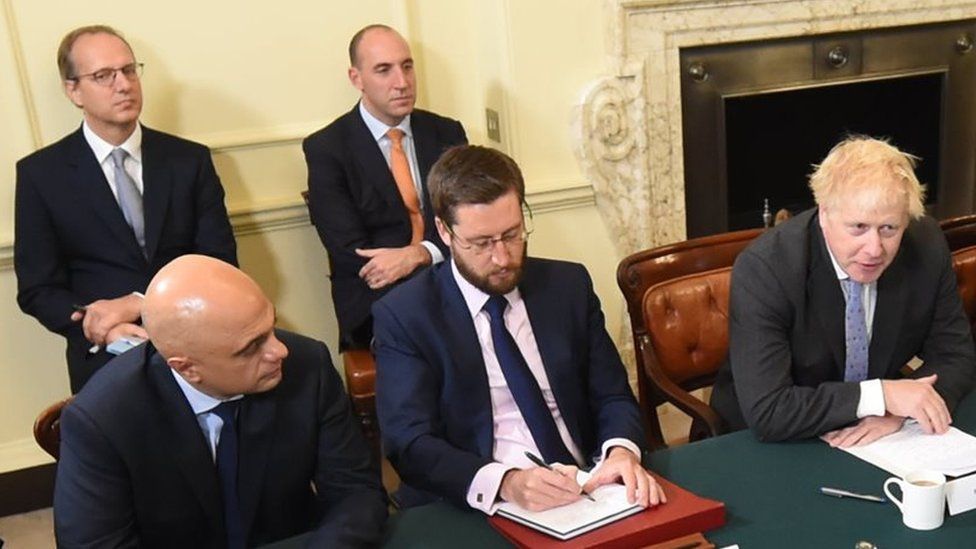 Four senior aides to Boris Johnson resign from No 10

Four senior aides to Boris Johnson have resigned from Downing Street within hours of each other amid growing pressure on the prime minister.

They were followed by the chief of staff Dan Rosenfield and senior civil servant Martin Reynolds.

The top aides' resignations come as Mr Johnson faces increasing questions over his leadership from within his party.

Mr Doyle told staff that "recent weeks have taken a terrible toll on my family life", but that he had always intended to leave after two years.

A statement from a No 10 spokeswoman said Mr Rosenfield had offered his resignation to the prime minister earlier on Thursday, but would stay on while his successor was found.

And Mr Reynolds - the prime minister's principal private secretary - will do the same, but then return to a role at the Foreign Office.

A number of MPs supportive of the prime minister have been tweeting praise, suggesting Mr Johnson was responsible for making necessary staff changes following a damning report by civil servant Sue Gray into rule breaking parties in No 10 during the pandemic.

However, Ms Mirza quit over the PM's false claim that Sir Keir Starmer failed to prosecute Jimmy Savile when he was director of public prosecutions, and his refusal to apologise.

Chancellor Rishi Sunak publicly distanced himself from the PM's original comment, saying: "Being honest, I wouldn't have said it."

And asked if Mr Johnson should apologise, he said: "That's for the prime minister to decide."

Labour's deputy leader, Angela Rayner, said: "No amount of reorganising Downing Street can clean up the sleaze that comes straight from the top.

"With [Mr Johnson's] senior advisers and aides quitting, perhaps it is finally time for him to look in the mirror and consider if he might just be the problem."

The biggest shock amongst these resignations is without doubt Munira Mirza's.

Boris Johnson's policy chief, a key adviser for well over a decade, she's defended him in the past when he's made controversial comments.

No-one expected her to go.

To publicise a letter with direct criticism of Mr Johnson, saying he was wrong to attack Sir Keir Starmer the way he did and should have apologised, is certainly damaging.

The other three resignations are the prime minister's top team, who run his office, his press operation, and advise him day to day.

It leaves a huge hole.

But Mr Johnson promised a shake-up after the partygate scandals to his MPs earlier this week so their departures were always possible in the light of that affair.

This evening, Tory MPs have been tweeting that "change, as promised" is happening. It seems a co-ordinated attempt to put a positive spin on what on the face of it looked chaotic.

The real question is whether all this prompts more Tory MPs to call, publicly for the prime minister to go.

Letters of no confidence

The wave of resignations comes at a tumultuous time for Mr Johnson as backbench unrest is growing within the Conservative Party.

The BBC is aware of 17 Tory MPs who have submitted letters of no confidence in the prime minister, with a total of 54 needed to trigger a leadership contest.

Many have cited the PM's participation in parties with staff in No 10 during lockdowns as their motivation to challenge Mr Johnson.

These gatherings included a "bring your own booze" garden party in May 2020 - the email invite to which was sent by Mr Reynolds.

The Metropolitan Police has launched an investigation into 12 of the parties and a full report by Ms Gray is expected to be published afterwards. 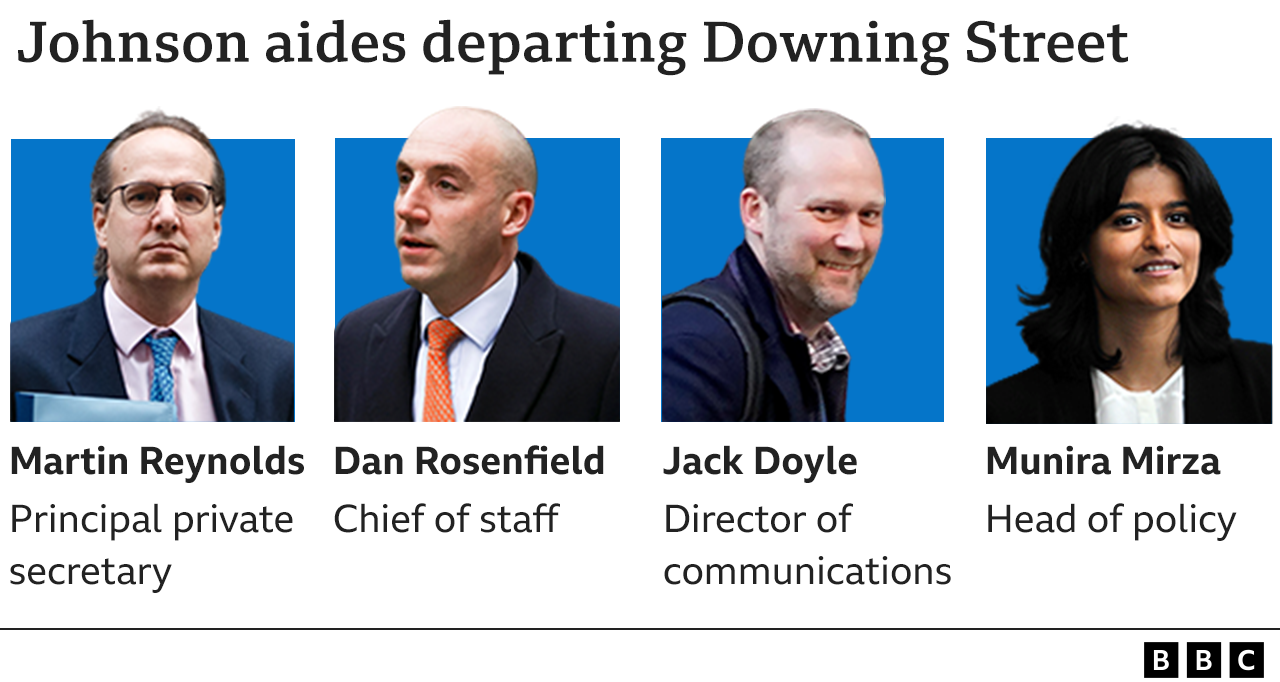 Who are the aides who have resigned?

The head of policy at No 10, Munira Mirza has worked for Boris Johnson for 14 years, including when he was mayor of London, and was seen as one of his most trusted advisers.

Jack Doyle worked as a journalist for the Daily Mail before joining Downing Street. He is reported to have attended one of the Christmas gatherings in December 2020, where he thanked staff for their work.

Martin Reynolds is a civil servant and worked as Boris Johnson's Principal Private Secretary. In that role, he headed up the PM's private office. He is responsible for sending an email invitation to staff inviting them to socially distanced drinks in the No 10 garden in May 2020.

Dan Rosenfield joined Number 10 as chief of staff in January 2021, and had worked in the Treasury for former chancellors Alistair Darling and George Osborne. He took over the chief of staff job from long-standing Johnson aide Sir Edward Lister.

Other MPs have pointed to the PM's remark about Sir Keir as one of their reasons for writing a letter, including senior backbencher and defence committee chairman Tobias Ellwood.

During a debate on the findings of a report into lockdown parties on Monday, Mr Johnson accused the Labour leader of spending "most of his time" as director of public prosecutions (DPP) "prosecuting journalists and failing to prosecute Jimmy Savile", despite having no evidence to back up the claim.

Disc jockey and TV personality Savile was revealed to be a serial sexual abuser after his death in 2011, having attacked hundreds of women and children at various locations including hospitals, schools and the BBC.

By Thursday, Mr Johnson appeared to have backed down, telling reporters he had not been talking about Sir Keir's "personal record" when he was DPP, adding: "I totally understand that he had nothing to do personally with those decisions."

But in her resignation letter, published by the Spectator, Ms Mirza said the PM should have apologised for the misleading remarks.

Speaking to Channel 5 News after Ms Mirza quit - but before the news of the other resignations was made public - the prime minister said he was "sorry to lose Munira", who had worked with him since he became Mayor of London in 2008.

He said she had "done an outstanding job" and had been "instrumental in delivering all sorts of fantastic policies".

But asked about her conclusion that his remarks about Sir Keir had been "inappropriate and partisan", Mr Johnson replied: "Well I don't agree with that."

He said: "No-one is commenting, least of all me, about the personal involvement of the leader of the opposition in the handling of that case.

"All that I've said is that the leader of the opposition apologised for the CPS's handling of that issue during his tenure and that's all frankly that needs to be said on that matter."

Downing Street confirmed that Tory MP Andrew Griffith would take over from Ms Mirza as the head of the PM's policy unit, as well as become the minister for policy.