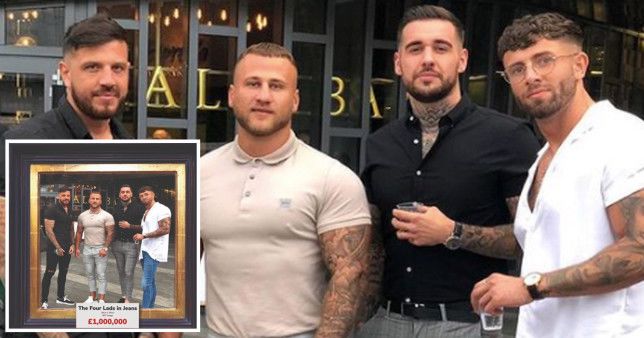 A meme that went viral last year of four men in tight trousers has been listed at auction for £1million.

The ‘Four Lads in Jeans’ – Jamie Phillips, Alex Lacey, Kevin Rooney and Connor Humpage – are selling the meme of them outside All Bar One as a non-fungible token (NFT) via online marketplace Rarible.

NFTs are unique digital items hosted on a blockchain. The winning bidder will therefore become the only owner of the image, which became an internet sensation in 2020. The current highest bid is $4.77.

They are selling their digital artwork in a bid to raise awareness of online abuse and funds for charity. If the sale is successful they will make a donation to the anti-cyber bullying charity CyberSmile Foundation.

The listing also says ‘15% of sales will go to creator’ Four Lads in Jeans.

While many memes lightly poked fun at the boys’ tight-fitting jeans and their ‘Love Island look’, they endured personal attacks over the picture taken on a night out in Birmingham in 2019.

Trolls even targeted Alex’s mum and he received numerous prank calls when his work mobile number was leaked.

‘Our image has created some of the best but also the worst moments in our lives as we experienced some of the highs and lows which come with the public spotlight,’ they said. 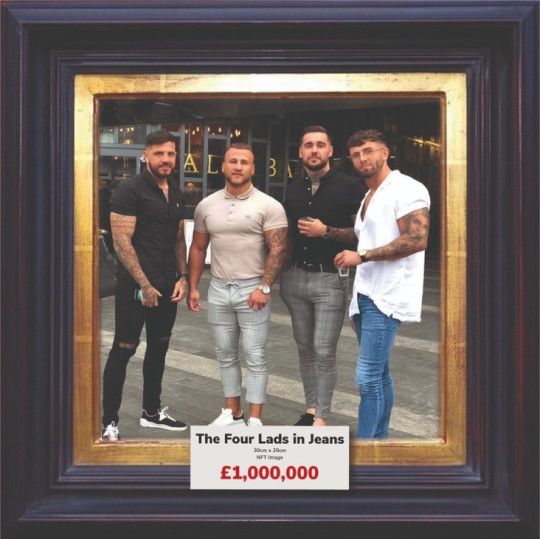 The original Four Lads in Jeans image has been listed at auction for £1,000,000

‘Our ultimate goal is to support in eradicating online abuse, and we hope the sale of our image can contribute towards this.’

The photo has been listed in an auction which runs until Thursday, May 13.

It can be bought immediately for £1million, but the quartet from Birmingham and Coventry may wish to sell for lower.

Rarible head of communications Masha Vyazemskaya said the sale was a chance for buyers to own a ‘piece of internet history’.

‘Memes as a phenomenon are native to the concept of NFTs,’ she said.