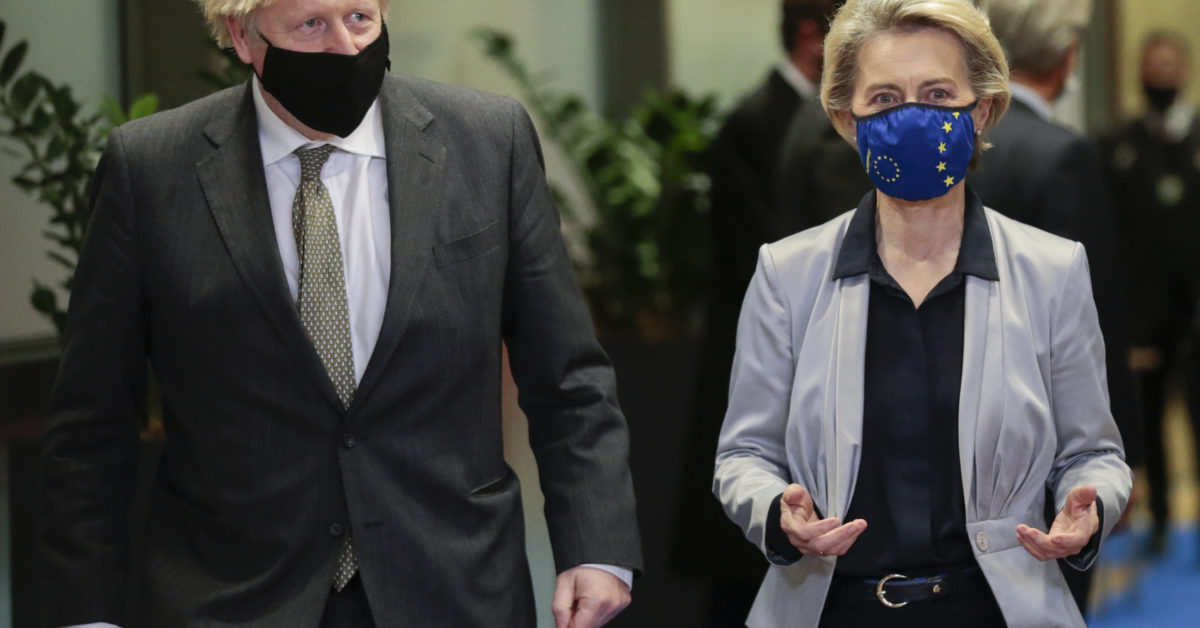 Forget the noise, the Brexit dinner date met its objectives

The mood music was gloomy but negotiators will keep talking.
In a typical Brexit plot twist, the dinner between Boris Johnson and Ursula von der Leyen was neither a success nor a failure.

On the one hand, the mood music was not good, with both sides offering a gloomy assessment in the wake of the meeting. A Downing Street spokesperson said the pair had a “frank discussion” but “major differences” remain. Von der Leyen sounded a tad more upbeat. The discussion was “lively and interesting” but the positions “remain far apart,” she said in a statement.

The fact the two sides issued separate takes instead of a joint statement was itself not a good sign. With three weeks to go before the end of the transition period, those hopeful of a deal might have been eager for more.

However, the stated objective of the meeting was not to clinch a deal or even to make a significant breakthrough, it was just to allow negotiators to keep talking. That will now happen.

The new deadline for progress is this Sunday, and Foreign Secretary Dominic Raab made clear on BBC’s Radio 4 “Today” program that there could be negotiations after that if things are going well.

So, even if the gaps that need to be bridged seem wide, talks haven’t yet collapsed. And both sides can tell their respective domestic audiences they are doing everything they can to try to break the deadlock.

Nevertheless, the threads of success might snap if the two sides continue to talk past each other on substance. “If there isn’t a deal it’s not because of a negotiation failure, it is because both sides have adopted fundamentally irreconcilable principles in the question of how you should cooperate when it comes to international trade,” said Anand Menon, director of the UK in a Changing Europe think tank.

Indeed, on the so-called level playing field issue — the extent to which the U.K. agrees to stick to EU standards and laws, and how that is enforced — there appears to be a deep-seated disagreement.

The U.K. insists it must have full control over its own state aid, labor, environmental and other regulations and not have to answer to another power. The EU argues free access to its market must come with safeguards to prevent it being undercut.

Success, failure or neither, the talks continue to plod on — at least for a few more days, while the real world continues to suffer in waiting. “The one thing that businesses didn’t want through the Brexit process was uncertainty and the one thing they have been ladled with in spades throughout this process is uncertainty,” Menon said.
#Boris Johnson
Add Comment