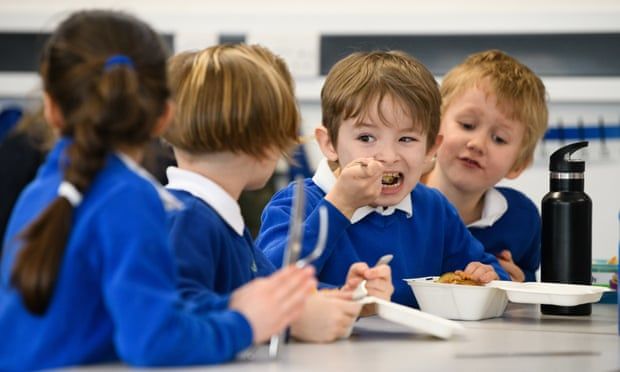 The white paper is also expected to include a new push to teach students about healthy eating and food preparation, with all students expected to leave school knowing how to prepare and cook at least six basic recipes, as well as adopting measures championed by the celebrity chef Jamie Oliver.

The move comes amid fears that schools in some parts of the country are struggling to meet the national school food standards that have been in place since 2015, such as including no more than two portions of deep-fried food in school lunches each week.

There is also evidence that childhood obesity increased markedly during the Covid pandemic, which saw physical education, school sports and other activities for children cancelled or restricted.

“Obesity has got worse because of Covid. This has been especially bad in the most deprived areas. Many of our most deprived children are carrying a lockdown legacy around their waists, which is affecting their life chances,” a Whitehall source said.

“No one has got this wrong deliberately but we need to make it a lot easier for everyone who is involved with feeding our kids.”

Geoff Barton, general secretary of the Association of School and College Leaders, said he applauded the change in the government’s “snobby attitude” towards children learning skills, but added: “We are wary of the idea of yet another agency carrying out checks on schools on top of all the other agencies that already do so. And if there is an aim to teach every secondary school child how to cook it is difficult to see where this could now be shoehorned into an already over-crowded curriculum.”

A pilot scheme to be announced in the white paper will mean the agency starts inspecting food offered by schools in a small number of local authorities later this year. The aim is to improve ways to help schools comply with the existing standards.

There will also be new funding to train secondary school teachers in cooking and food preparation, with £5m over three years to give training to a teacher from every state secondary and create courses. The government wants every child to leave school knowing how to cook six recipes.

The white paper also adopted a policy promoted by Oliver and Bite Back 2030, the charity the chef co-founded to lobby to improve food for young people. Last month, Oliver and the leaders of 600 state schools called for each school to publish annual food reports showing what progress it had made in meeting standards on health and nutrition.

According to the white paper, the reporting of schools food arrangements will initially be voluntary but the intention is for it become mandatory. School governors are also to be given extra training on their responsibilities to improve food standards.

A recent report by Bite Back highlighted the different lunch choices offered at schools across the country, with pupils on free school meals reporting they were given fewer choices.

But the white paper is not thought to improve funding for children receiving free school meals, which includes all infants up to year two. The government pays £2.34 for each child’s food a day, only slightly more than it did a decade ago despite rising prices.
#Covid
Add Comment