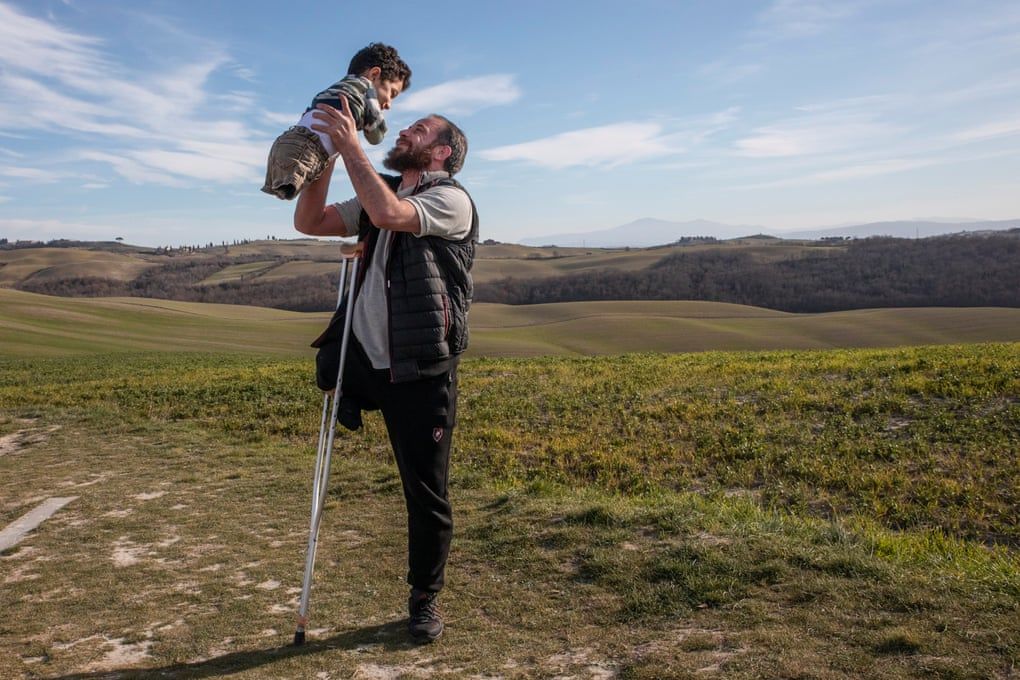 Flying high: how a photo of a Syrian father and son led to a new life in Italy

A tender moment captured by Mehmet Aslan of Munzir al-Nazzal and his son, both survivors of the Syrian war, prompted Italian organisations to act. A year on, they are settling into life in Tuscany

In January last year, while working on the Turkish-Syrian border, photojournalist Mehmet Aslan photographed a Syrian man, Munzir al-Nazzal, who had lost a leg in a bomb attack. Munzir was playing with Mustafa, his 5-year-old son, who was born without limbs, and the shot portrayed the father, propped up on a crutch, raising his smiling child into the air.

It was an image that was shared across the world and last October it was named photo of the year at the Siena international photo awards, moving the festival’s organisers and the Catholic church to take action over the little family, who were at that point languishing in a refugee camp in Turkey.

After lengthy negotiations between the Diocese of Siena, Caritas, a Catholic aid association, the organisers of the Siena photo awards and authorities in Turkey, Munzir and Mustafa arrived in Italy on 21 January.

“I will never thank the Italian people and the church enough for what they have done for us,” says Munzir, 33. “In these 11 years, no other country had moved to help us. And we will never forget it!” 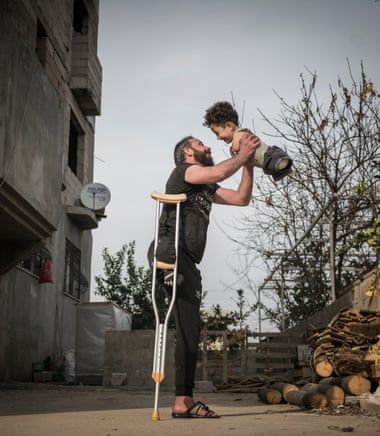 Siena award’s photograph of the year 2021: Hardship of Life by Mehmet Aslan.

Munzir lost his right leg in 2014 when a bomb was dropped as he walked through a bazaar in Idlib, Syria. In 2017, his wife, Zeynep, was pregnant with Mustafa when, on 4 April, she was badly affected by a deadly sarin gas attack on the rebel-held town of Khan Sheikhun, in north-west Syria, which killed 89 people. According to a UN report that year, Syrian government forces were behind the strike.

The medication Zeynep was given affected the baby and Mustafa was born without arms or legs due to Tetra-amelia syndrome, a congenital disorder.

“For 11 years, the president of Syria has waged war against his own people,” says Zeynep. “Because of the war, there are thousands of people there who have lost their legs and arms like my husband. And in my city, there were four pregnant women, victims of the sarin gas attack in Khan Sheikhun, whose children were born with the same malformation as Mustafa.”

Mustafa needs special electronic prostheses, which were not available in Turkey. Italian paediatricians, specialists and surgeons have visited the family since they arrived and are working to design artificial limbs.

All the doctors are working for nothing to try to give Mustafa the life and childhood the war took away from him. Even the contrade of Siena, the 17 city districts that famously compete in the biannual 90-second horse race around the Piazza del Campo, have offered their economic support to the family. 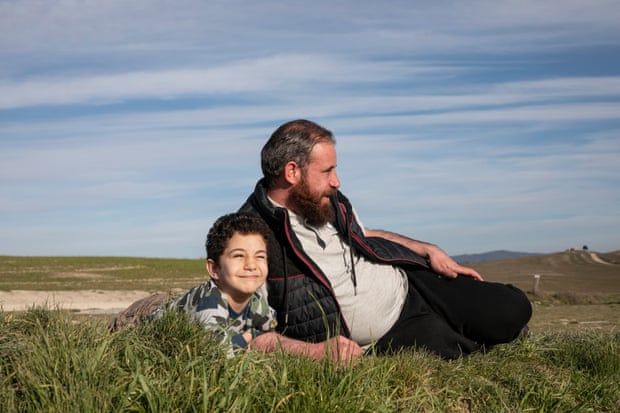 Munzir and Mustafa spend time in the Tuscan hills each day.

The Italian authorities worked with the UN refugee agency, the Turkish authorities and Caritas, which is offering food and a home to the Syrian family in a small village near Siena.

In the end, the Catholic church negotiated the passage of Mustafa and his family through Turkey, thanks to a humanitarian corridor, which allows for legal passage across countries, perhaps one of the most effective models for avoiding asylum seeker deaths and suffering, but unfortunately rarely used by European countries.

“I hope that Mustafa’s story and his new life in Italy can serve as a harbinger to raise awareness around Europe that the humanitarian corridor is the only dignified way to allow these people to reach Europe,” says Siena’s Cardinal Augusto Paolo Lojudice, who, alongside the Siena photo award’s founder, Luca Venturi, followed the negotiations to bring the family to Italy. “The humanitarian corridors require a dialogue between two countries, and unfortunately, this does not always happen. Where there is no stable government, as in Libya, it becomes difficult to propose a humanitarian corridor.”

In the past six years, Catholic associations and charities have brought to Italy more than 4,300 refugees from around the world.

Munzir says he barely noticed when Aslan took the original picture on 6 January last year: “I was doing what I do every day, playing with Mustafa.” Munzir says his son loves being raised in the air because it gives him the feeling of flying, a sense of physical freedom for a child born without limbs. Munzir plays with him every day here in Italy, surrounded by the beautiful Tuscan hills, which have taken the place of the decaying, grey buildings of the Turkish-Syrian border.

“The story of Mustafa and Munzir, who would not be here without that picture and the attention of the press, also serves to remind everyone, especially in these times, that war is nothing but the total destruction of every life,” says Lojudice.

“To remind that war is the terrifying action that man wages against another man, and therefore against himself. But this story also shows that there is something higher in this world. As a man of [the] cloth, I call it God – you can call it humanity.”