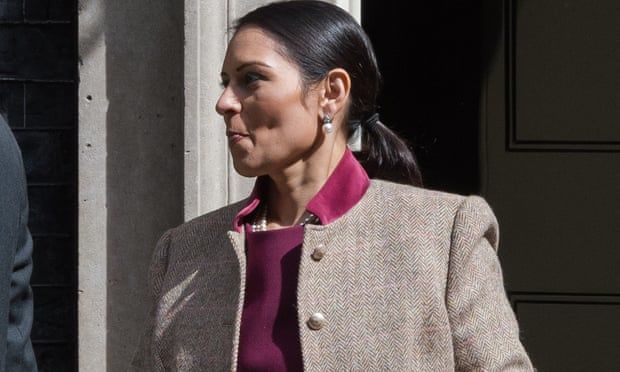 Group of asylum seekers sent formal notices advising they will be relocated to east African country, say officials
The first deportation flight to Rwanda carrying people who arrived in the UK without authorisation is scheduled to leave on 14 June, Priti Patel has announced.

A group of asylum seekers has been sent formal notices by the Home Office advising they will be relocated to the east African country, officials have said.

There remain few details about the numbers of people expected to be sent to Rwanda in this first flight, and how they have been identified. Officials said those who will be removed are already in detention, while the government is braced for a flurry of legal challenges over their removal.

“The Home Office has begun issuing formal removal direction letters to those who are set to go to Rwanda where they will be able to rebuild their lives in safety,” a statement from the department said.

It is the next legal step after “notices of intent” were issued to dozens of people who have arrived in the UK by irregular means.

The timing of the announcement will prompt suspicion. It comes amid growing pressure on Boris Johnson for a policy success, amid claims he could face a vote of no confidence as soon as next week.

In a statement, Patel said: “Our world-leading partnership with Rwanda is a key part of our strategy to overhaul the broken asylum system and break the evil people-smugglers’ business model.

“Today’s announcement is another critical step towards delivering that partnership and, while we know attempts will now be made to frustrate the process and delay removals, I will not be deterred and remain fully committed to delivering what the British public expect.”

The removal direction letter confirms that someone will be going to Rwanda and when, say officials.

“This is a completely unworkable, extortionately expensive, and deeply un-British policy. There is no proper process for identifying people who have been trafficked or tortured.”

Campaigners have raised alarm about access to legal advice and mental health support for people who are told they may be subject to the Rwanda removal policy.

An Afghan man who came to the UK as a child told the Independent he tried to take his own life after being told he faced deportation to Rwanda. Hakim Khan, 32, said he would “rather die” after he was detained at Brook House removal centre this month.

Home Office officials say they are speaking with all individuals to ensure the process is fully understood and people are given the appropriate support ahead of departure.

“Once in Rwanda, there is a generous support package, including up to five years of training, accommodation, and healthcare on arrival in Rwanda. Under this partnership the UK is also investing an initial £120m into the economic development and growth of Rwanda,” the statement said.

When the deal with Rwanda was announced last month, Johnson claimed it would result in thousands of people being sent 4,000 miles (6,500km) to have their claims processed.

Ministers had hoped to see early evidence that the proposition of being sent to Rwanda would break the business model of people-traffickers operating in the Channel.

More than 4,850 people have reached the UK in small boats since 14 April, when the Rwanda plans were unveiled. That is more than two and half times the number that crossed in the same period last year and maintains the same pace of increase seen since the beginning of the year.
#Boris Johnson  #Priti Patel  #Johnson
Add Comment