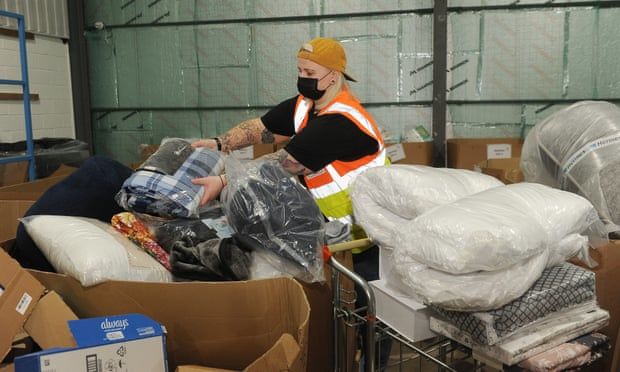 First food banks, now bedding banks: in my time in politics, this is the worst poverty I've seen

There are families who can only turn on their heating for two hours a day and use torches at night rather than spending on electric light, says former prime minister Gordon Brown
Bedding banks” are about to take their place alongside food banks, baby banks and children’s clothes banks as the new face of charity. Parents unable to afford their heating bills are now turning to blankets, sheets, duvet covers and sleeping bags for their children as their cheapest available protection against the cold winter nights. All because, no matter how prudently they budget, families do not have the cash to feed their prepayment gas and electric meters – it is an 18th-century answer despite there being a 21st-century solution.In all my time in politics I have never witnessed so much poverty and hardship. In Kirkcaldy and Cowdenbeath, the constituency I grew up in and represented for 32 years and where I am patron of the local family centre, there are more children than ever going to school ill-clad and hungry; desperate mothers falling into the hands of loan sharks; and mental health problems escalating with little NHS provision to cope.

A few weeks ago hundreds of anxious mothers queued up outside their local Co-ops after the family centre staff raised funds to add a £50 credit to their gas and electricity prepayment cards.

This is poverty at its demeaning and degrading worst. Even before the April energy price rises, I am hearing stories I thought I would never hear in 2022: of children obsessively checking the electricity meter when they wake up in the bitter cold; of families who can only turn on their heating for two hours a day and use torches at night rather than spending on electric light; and of mothers unable to hide their tears when they cannot provide their children with either winter clothes and shoes or basic warmth.

Sadly the welfare state safety net has been torn apart. A few weeks ago a local charity found three children sleeping on the floor under just one blanket. Food banks are now helping a stream of mothers unable to afford cookers to give their children hot food even once a week. They are among the nearly 4 million families who are already behind with their bills. Last week, because of help from Amazon, the Co-op and Scotmid, the Kirkcaldy family centre was able to acquire hundreds of bedding items but now, as they run out again while the need continues to rise, it has sent out direct appeals to established bedding and bedding goods companies for any surplus blankets and bedding.

In 1993, during a previous economic crisis, the then government raised VAT and national insurance despite all promises not to do so and millions of people paid the price as family poverty shot up. In the austerity years, benefits were cut – first after 2010 and then more savagely after 2015. But nothing in recent years compares to what’s ahead as simultaneously food costs rise 5%, and gas and electricity prices increase as much as 50%, with benefits subject to only a 3.1% rise even as inflation heads to 7% and the national insurance hike costs the typical family about £20 a month.

So with only five weeks to go before the biggest hit to living standards for decades, it’s time to call a halt to the economic madness of allowing, at one and the same time, tax rises, food price hikes, escalating heating bills and real-terms benefit cuts – the quadruple whammy that will tip already hard-pressed families over the edge. It’s time for ministers to wake up to the pain already being felt in places they are unlikely to ever visit, and to the suffering of people they may never see; for no government can justify the further deprivation being imposed on millions of its citizens.

Loughborough University’s minimum income standard project, led by Donald Hirsch, has worked out what families need as a baseline income, drawing on research into what the general public considers “essential” expenditures. Last year a couple with two children, aged three and seven, needed £482 a week after paying rent, council tax and childcare. Inflation, Hirsch tells me, has already pushed this up by 6% to £511. Yet come April, benefits for a family like this will rise by only £8 a week – meaning they would have only £274 a week in available income once the contribution to council tax is paid. They have already lost the £20 uplift in universal credit that was cruelly removed last October and, with their income now barely covering half (54%) what they need, they are much worse off than last year.

This is why, to ensure their children have food and other essentials, parents often go without necessities themselves. According to the minimum income standard, the full cost of food, gas, electricity, water and home insurance for our family of four is £153 a week, leaving only £4.30 a day per person to cover everything else – from clothes, mobiles and laundry to bedding, toilet rolls and other sanitary goods.

When asked, Boris Johnson refused to answer if he could live on universal credit. And no wonder: the weekly personal allowance for couples over 18 would total £121 from April, only a £3.60 rise; and the single person’s rate for those over 25 will be £77 – just a £2.30 rise that will never cover the rising food prices and record heating bills, even after the £200 loan households will have to pay back over the next five years. How can a single woman, looking for work, make ends meet when the mobile phone, broadband and bus fares that she needs for job hunting could each cost about £10 a week and when, like thousands, she has to contribute towards her council tax and rent and repay a loan? Any thought of clothes or even laundry or toiletries is out, and the only way £77 can cover her bills is by cutting back on meals and warmth. This is why, even before its economic statement on 23 March, ministers must – as the Child Poverty Action Group and others have consistently demanded – reverse the £1,000 a year cut in universal credit and do more to help with heating and benefits as well as postponing the national insurance rise.

It is often said that true leadership is leading by example. All of us will fall short and Partygate is an especially shameful and painful episode that has distressed millions who made the sacrifices that their leaders were not prepared to make themselves. Povertygate, though, plumbs new depths: leaders are knowingly imposing hardship they will not experience themselves on those already too poor to protect their families. And unlike Partygate, poverty does not end, but goes on day after day, heartbreaking and cruel even beyond austerity. No government should be allowed to get away with it.
#Boris Johnson  #Johnson
Add Comment