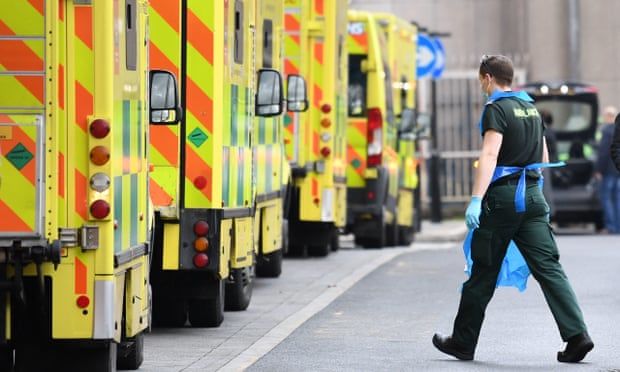 London ambulance service programme will shut 68 sites and replace them with 18 new ‘hubs’
NHS bosses plan to shut every local ambulance station in London, prompting fears that patients could be harmed if 999 crews take longer to reach them, the Guardian can reveal.

The London ambulance service (LAS) has started a controversial programme to close all 68 ambulance stations and replace them with 18 new “ambulance deployment centres” or “hubs”.

A patient group has criticised the plan as “dangerous” and MPs are worried that having fewer ambulance stations around the capital could mean patients wait longer to get to hospital.

“This move to shut every ambulance station in London could cause significant harm to patients because of the delays that will take place in getting to them,” said Malcolm Alexander, the chair of the LAS Patients’ Forum, a non-statutory watchdog, and Hackney Healthwatch, a government-funded statutory body that scrutinises NHS services in the east London borough.

“We have come across many situations where people have suffered harm because ambulances have taken too long to get there. It looks like this is quite dangerous from the point of view of patient safety.”

The LAS included the plan to close all 68 stations in its “estates vision” document , which it published in 2019, but did not publicise nor invite public responses. It had passed unnoticed until London MPs were alerted to it by the LAS Patients’ Forum and Hackney Healthwatch.

It says that the closures would not lead to longer waiting times but will improve the care patients receive and give ambulance crews better facilities.

Four ambulance stations in north-east London – in Romford, Ilford, Hornchurch and Becontree – have already been earmarked for closure in the first stage of the plan. They will be replaced by one new ambulance deployment centre in Romford in Havering. Local MPs have voiced their unease over the change.

In a letter in June to Andrew Blake-Herbert, Havering council’s chief executive, the LAS’s deputy chief executive, Khadir Meer, said that the service planned “to overhaul our estate by replacing our existing 68 stations with a network of 18 state-of-the-art ambulance deployment centres, operating under a new “hub and spoke” model.

“Once the new ambulance station is up and running this will ultimately result in the permanent closure of these [four] stations,” he added.

But Meer assured Blake-Herbert that “this change will not adversely affect patients in the area. It will transform the way we work to ensure we deliver consistent high-quality care to our patients when they need us.” The new hub “will be designed around patient care and will enable rapid and efficient preparation and deployment of our frontline teams,” he said.

Margaret Hodge, the Labour MP for Barking, said: “The proposed closure of Becontree ambulance station and three others in north-east London to create one hub in Romford is worrisome.

“Placing my constituents’ nearest ambulance station further away from their homes will, needless to say, negatively impact response times for 999 calls, and therefore deplete quality of care for residents. The impact this gratuitous decision will have on people experiencing medical emergencies is unjustifiable.”

A review by Lord Carter of Coles of England’s 10 regional ambulance services found that the LAS had the most stations in terms of the area it covered, with one for every eight sq miles (13 sq km), compared with one every 92 sq miles (148 sq km) in the West Midlands. But it also concluded that each of the 68 stations covered a population of 120,000 – the largest in England.

Jon Cruddas, the Labour MP for Dagenham and Rainham, has previously voiced disquiet that “the loss of an ambulance base at Becontree does raise concerns about response times across the Dagenham part of my constituency.

“While I understand the need for consolidating existing facilities, I will be seeking assurances from the LAS that this will not negatively impact those requiring urgent attention across Dagenham and Rainham.”

A LAS spokesperson said: “London ambulance service currently has the largest number of stations in the UK and the oldest estate. Moreover, a significant proportion of the LAS estate is under-utilised and not fit for purpose, with some parts built in the 1800s.

“We are at a very early stage in developing a London-wide strategy to transform our estate to meet future needs, and at all stages of this process we will ensure any changes do not impact on the care patients receive.”
Add Comment