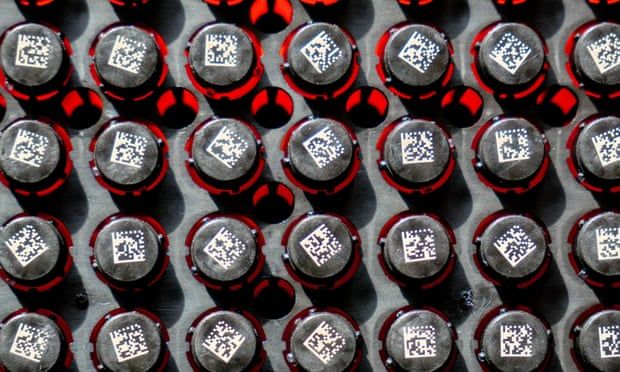 Fears over China’s access to genetic data of UK citizens

Biobank urged to review transfer of information for medical research

Rising political and security tensions between Beijing and the west have prompted calls for a review of the transfer of genetic data to China from a biomedical database containing the DNA of half a million UK citizens.

The UK Biobank said it had about 300 projects under which researchers in China were accessing “detailed genetic information” or other health data on volunteers.

The anonymised data is shared under an open-access policy for use in studies into diseases from cancer to depression. There is no suggestion it has been misused or participants’ privacy compromised.

Biobank said data was only given to bona fide researchers, who must agree to store it securely and use it for a specified purpose, adding that it has “stringent controls” in place including “rigorous access and ethics checks”.

The data-sharing is facing scrutiny amid a shift in geopolitical relations, with analysts raising concerns about the challenges of monitoring usage beyond UK borders and a lack of reciprocal data-sharing by China.

Biobank said researchers accessing its data were bound by agreements dictating how it could be used and that usage and outputs were “regularly monitored”. But it said relationships relied on trust and that it was not feasible for projects to be overseen closely. Some projects involve the transfer of data to China for projects conducted without UK collaboration.

Professor Jonathan Adams, from the Policy Institute at King’s College London, and co-author of a report analysing UK-China research collaborations, said the data-sharing was “problematic” and questioned how Biobank could police usage.

He said there were “huge potential returns from having a good, positive, open relationship” with China but that current relationships relied “far too much on things like formal agreements, which we believe will protect things in a way they would if we were working with conventional partners”. “China is different. It’s transformed into a public research culture over a very short period, and the norms we expect are not necessarily universally adopted. My concern is that what gets published in English would be the bit above water that you can see,” he said.

Professor Yves Moreau, a geneticist who has worked on projects using data from UK Biobank, described the resource as “world-class” and said scientists had a “moral duty” to share knowledge, but raised concerns about the potential for misuse – such as researchers linking the data with other datasets – or for the authorities to interfere.

“We are totally unprepared for a situation where an institution and national authorities would support the misconduct of the scientist,” he said. “It’s about being watchful, and looking into the issue to find a proper balance, so we don’t wake up in 10 years and realise, ‘Oh, what did we do?’”

Launched in 2006 with the goal of furthering open science, the UK Biobank project, partly funded by the Department of Health, stores in-depth genetic and health information on about 500,000 people.

Since 2012, approved researchers from around the world have been able to pay £3,000 to £9,000 for access to datasets, including questionnaires and physical measurements; linked health records; and whole genome sequence data. The resulting research has produced key insights into diseases including cancer and heart disease, as well as crucial data on Covid-19.

In 2012, the UK government actively encouraged partnerships with China, resulting in a “golden age” of collaborations between 2014 and 2019 that led to initiatives by universities including Oxford.

But Beijing’s relationship with the west has soured, with concerns over human rights abuses and aggression in Taiwan and Hong Kong. Last month, the heads of MI5 and the FBI warned of a “game-changing threat” from China’s efforts to steal technology. China denied the claims and said the security services were “spreading all kinds of China-related lies”.

Guidance from the UK’s Centre for the Protection of National Infrastructure, published in March, meanwhile, warned that China’s National Intelligence Law – which allows intelligence agencies to force businesses and individuals to hand over data and assets on request – could “affect the level of control” UK researchers have over information shared with Chinese universities.

The Chinese government has explicitly highlighted health tech, including genomics, as an area of strategic focus, identifying it as a priority in its Made in China 2025 plan. In the US, intelligence officials have claimed that China is collecting genetic data from around the world in an effort to develop the world’s largest bio-database. At the same time, the Chinese health ministry has tightened access to data on its own citizens by international researchers, citing national security. Dr Joy Zhang, a reader in sociology and expert in China’s science policies at the University of Kent, said: “China is tightening its regulations and it seems to be so hard to get data from China, when we’re generously sharing ours. That is a legitimate concern in terms of scientific advancement.”

Many of the studies using Biobank data were paid for by the Chinese state-funded National Natural Science Foundation, which aims to “promote progress in science and technology” and “the harmonious socio-economic development of the nation”.

The UK Biobank said it shared data with researchers from more than 100 countries under its “equitable, transparent and non-discriminatory” open-access policy, and that it was no surprise researchers from China were included in this.

It added that those receiving data are prohibited from using it to re-identify individuals and are required to report breaches, with no such incidents reported to date. While genetic data derived from DNA has been shared with researchers in China, physical samples have not been, a spokeswoman said.

Mark Effingham, deputy chief executive of Biobank, added that it had not been contacted directly about the data-sharing by the government but kept its policies under review. “We actively monitor national security concerns and welcome dialogue with the government on this, while remaining committed to open science and the promotion of global public health,” he said. “The more scientific research we enable, the more insight is gained into the prevention, diagnosis and treatment of disease.”

A UK government spokesperson said it wanted to enable “collaborative research” while ensuring national security and data protection, and had published guidance on collaborating with international partners to help researchers “manage risks”.