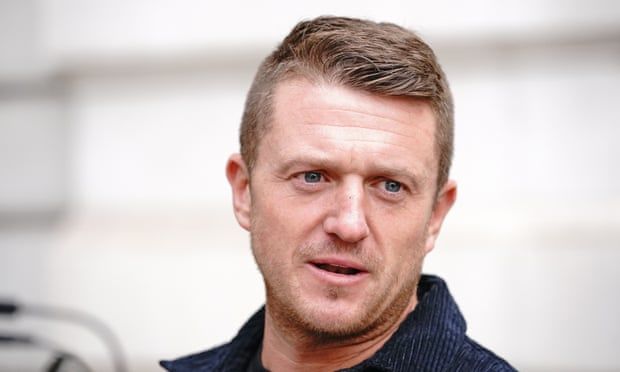 English Defence League founder at Cancún airport trying to go on holiday despite claiming bankruptcy
The far-right activist Tommy Robinson has said he has been detained in Mexico while attempting to visit the country on holiday, despite repeated claims of bankruptcy.

The English Defence League founder, whose real name is Stephen Christopher Yaxley-Lennon, shared a video on Saturday saying that he had been detained in Cancún airport upon arrival with his children.

“I’m being deported as a matter of national security,” Robinson says in the video, in which he questions the decision to detain him, claiming to have done nothing but “criticise Islam”. Robinson has been convicted in the UK for fraud, stalking, assault, using someone else’s passport, using threatening behaviour, and contempt of court.

Robinson said his three children were with a friend who was travelling with them.

The video emerged the week after he failed to attend a high court hearing where he was to be questioned about his finances after losing a libel case. Robinson claimed he was bankrupt after losing a libel case brought against him by Jamal Hijazi, now 18, last year. Robinson was sued after falsely claiming in Facebook videos that Hijazi, who had been filmed being attacked at school in 2018, was “not innocent and he violently attacks young English girls in his school”. He was ordered to pay £100,000 in libel damages.

Robinson could face jail over possible contempt of court for not turning up to last week’s hearing, with the judge saying on 22 March that he could only refer the matter to a high court judge to consider if there had been contempt. Judge Dagnall said that while there may be a reason for why he did not attend, “he knew perfectly well that this hearing was going to take place”.

Nick Lowles, CEO of Hope Not Hate, the UK’s leading antifascism and antiracism campaign group, said, “Tommy Robinson was apparently detained in Mexico after trying to go on holiday. Yet he has repeatedly claimed that he is bankrupt. Just last week, Robinson failed to attend court regarding the ongoing investigation into his bankruptcy.

“The very fact that a supposedly bankrupt man can afford to go on holiday to Mexico speaks for itself.”

Lowles said Hope Not Hate believes that Robinson could have up to £3m in assets, and that the organisation has collected evidence to prove it. “Tommy Robinson’s reputation for spreading vitriol and hate has clearly reached an international scale,” he said.

Hijazi’s lawyer, Ian Helme, had also questioned Robinson’s claim of bankruptcy, telling the court there was information “that what is stated in his bankruptcy application is not a full account of [Robinson’s] assets”.