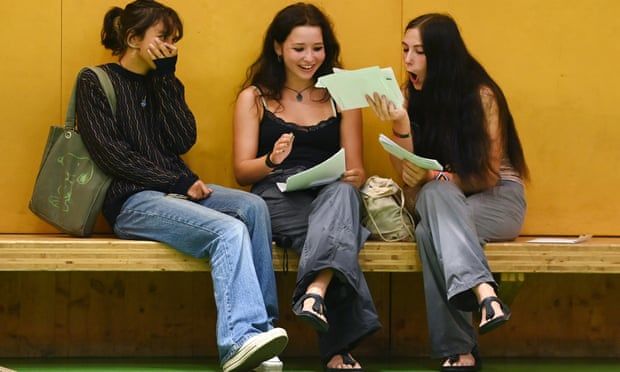 This summer’s GCSE results are the first from examinations in three years. Results are significantly lower than last year but we should not read anything into that. After two years of grades increasing with the use of teacher-assessed grades, the government signalled its intentions early that we should begin the process of returning to pre-pandemic grade distributions. In September, the qualifications regulator, Ofqual, announced results would be around the midpoint of those in 2019 and 2021.

This is exactly what we have seen in today’s data. The proportion of entries from 16-year-olds awarded a grade 4 or above is down from 79% last year to 75% today, and the proportion getting the higher grades (grade 7 and above), which peaked at 30% in 2021, has fallen to 27% this year. 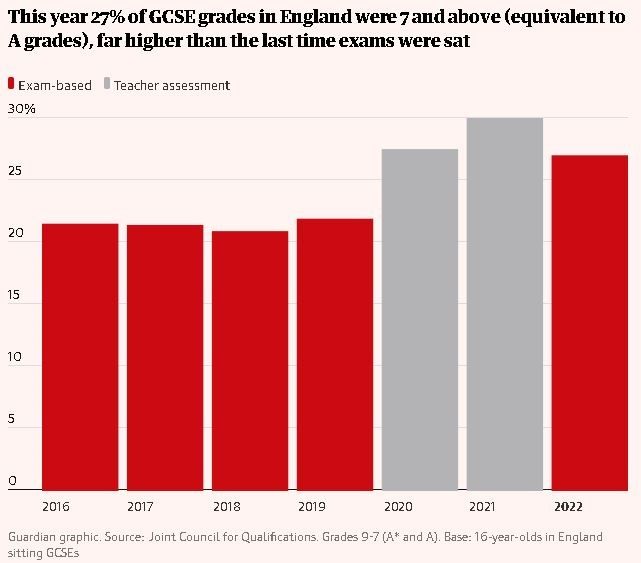 But on average, that means results are still about a fifth of a grade above where they were in 2019. This, along with a number of mitigations ahead of exams such as optional topics in some subjects, struck a balance between fairness across different cohorts, whilst recognising the level of disruption experienced by those students getting their results today. Remember, this is a group of young people who have not had a year at school that was not affected by the pandemic in some way since they were in year 8. The hard work and resilience of this cohort and their teachers to get through to today is surely the most impressive result of all.

Away from the headline figures, there has been data published today that gives us a better understanding of what has happened in schools over the course of the pandemic. Results from the national reference tests in English and mathematics, which are sat by a representative sample of year 11 students, provide a good way of tracking standards over time. In English, results have held up, despite the effect of the pandemic, with no statistically significant change in outcomes. The same cannot be said for mathematics, where there have been falls across the attainment distribution.

The breakdown of results by region continues to reflect the geographic disparities in pupil outcomes, with those in London outperforming those elsewhere. A third of grades awarded to pupils in London on Thursday were at grade 7 or above, whereas in the north-west and Yorkshire and the Humber it was under a quarter. These differences have grown slightly since 2019. We cannot yet say whether this is as a direct result of the pandemic, but our own analysis of learning loss for younger pupils did highlight that the pandemic’s effects on education were felt more acutely in parts of the north and the Midlands than in London. 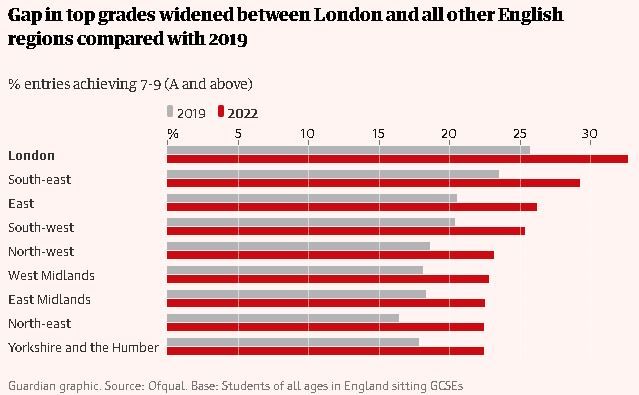 But whether it is the pandemic or longstanding differences in outcomes, it means a pupil opening their GCSE results in London was considerably more likely to receive grade 7s than a pupil in the north. Boris Johnson’s rhetoric about levelling up opportunity at the start of his time in office has, for now at least, not translated into a more equitable education system.

The way the school system has dealt with the challenges thrown its way over the last two years is extraordinary. But the challenges continue, and as we move into the new school year, among everything else, school leaders are scratching their heads about how they are going to meet increased energy and staff costs within already stretched budgets. The arrival of a new prime minister in the coming weeks could also mean the appointment of a new secretary of state for education, the fifth in the last year. What are the chances they will still be in post to comment on GCSE results next summer? And crucially, if they are, what will they have done to help schools through another difficult year?