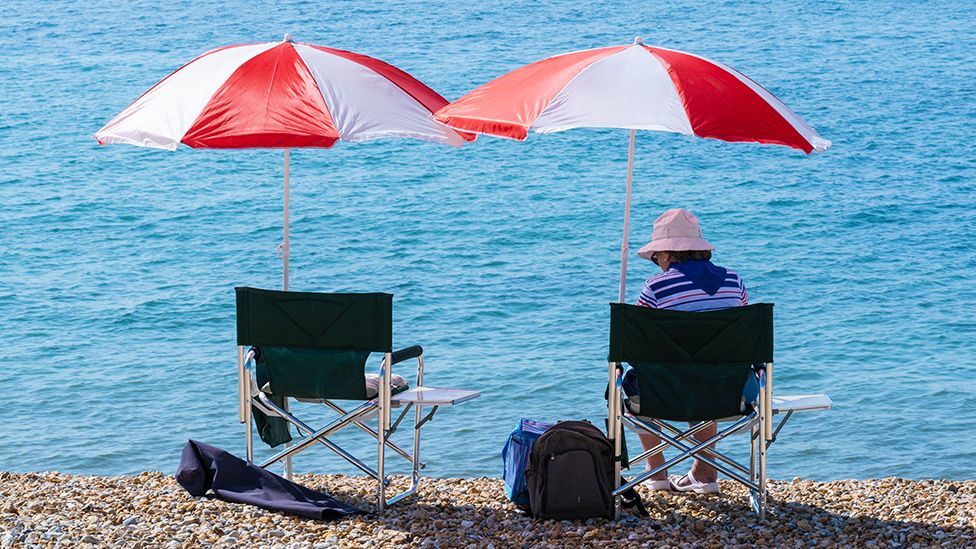 Extreme heat warnings for UK to last until Friday

Extreme heat warnings are in place until Friday as the heatwave continues.

Public Health England extended its heat-health alert until Friday, as temperatures hit 32.2C (89.9F) at Heathrow Airport, making it the hottest day of the year again.

The Met Office has issued two new-style extreme heat weather warnings and told people to watch out for sunburn and heat exhaustion.

It has also warned of thunderstorms for parts of England.

One of the amber heat warnings covers parts of Wales, all of south-west England and parts of southern and central England. It will be in place until Thursday, when temperatures are expected to peak.

The second amber warning, which is for Northern Ireland, is in place from 08:00 BST on Wednesday to 23:59 on Friday.

Public Health England advises staying out of the sun between 11:00 and 15:00, drinking plenty of fluids and avoiding excess alcohol and physical exertion during the hottest parts of the day.

The two amber warnings in place for thunderstorms last until 19:00 on Tuesday.

One is in the East of England, taking in Cambridgeshire, Essex and Suffolk, while the other affect parts of London and south-east England, including Greater London, Kent and Medway.

There is a wider yellow weather warning for isolated thunderstorms across south-east England on Tuesday, lasting from 13:00 to midnight, with the Met Office saying there could be torrential rain, lightning, large hail and gusty winds.

The Met Office is warning that over the next few days many people could be at risk of sunburn or heat exhaustion, including dehydration, nausea and fatigue.

The more vulnerable are being warned of more adverse health effects.

And it has warned that, as temperatures soar, some heat-sensitive systems and equipment may fail, leading to power cuts. There could also be delays to road, rail and air travel, meaning people experiencing long delays might suffer. 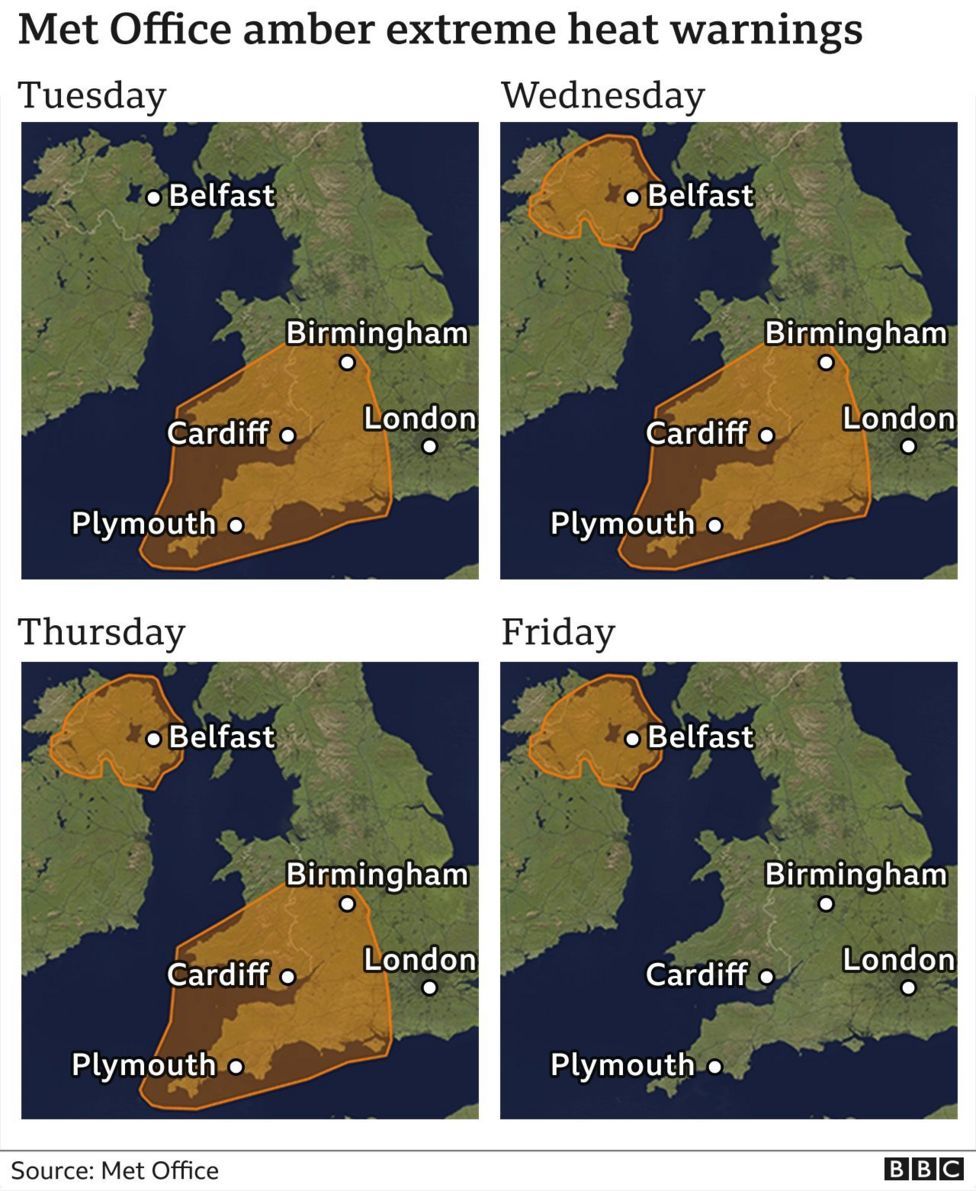 The Met Office said the high temperatures were expected in the day and at night, meaning disrupted sleep for many.

It also warned that as more people visited coastal areas, lakes and rivers, there was an "increased risk of water safety incidents".

Six people drowned in English lakes and rivers over the weekend, with rescuers warning of the invisible but deadly dangers of open water. And a 13-year-old boy drowned in a lake in County Down on Monday. 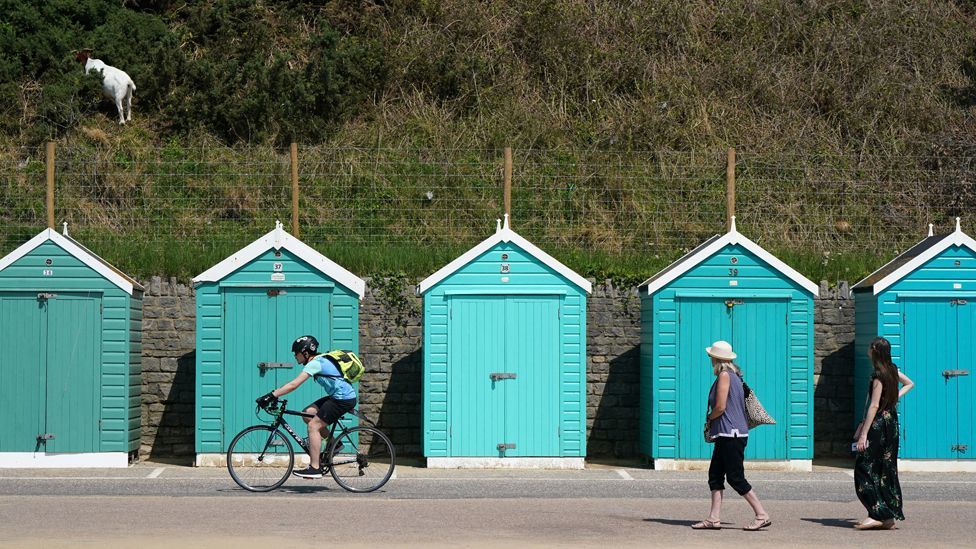 Northern Ireland, in particular, is going to see further increases in temperature on Wednesday and Thursday and could get close to breaking the record - set only last weekend - for its hottest day.

Thing will start to cool down again over the weekend, with temperatures returning to those expected at this time of year of between 20C and 25C (68-77F).

He said hot spells like this one do happen every summer - but that extreme heat episodes in the UK are becoming more frequent, prolonged and hotter.

The Met Office launched its new extreme heat warning at the start of June 2021 to highlight potential widespread disruption and adverse health effects. Amber is the second-highest level in the system.

It comes after a record-breaking number of heatwave deaths were recorded in England last summer.

The world has already warmed by about 1.2C since the industrial era began, and temperatures will keep rising unless governments around the world take steep cuts to emissions.

What to do if someone has heat exhaustion

If they can be cooled down within half an hour, then heat exhaustion is not normally serious.

The NHS advice is to:

* Move them to a cool place.


* Get them to lie down and raise their feet slightly


* Cool their skin - spray or sponge them with cool water and fan them. Cold packs around the armpits or neck are good too

However, if they do not recover within 30 minutes, then what follows is heat stroke.

It is a medical emergency and you should call 999.

People with heat stroke may stop sweating even though they are too hot, their temperature could have passed 40C and they may have seizures or lose consciousness. 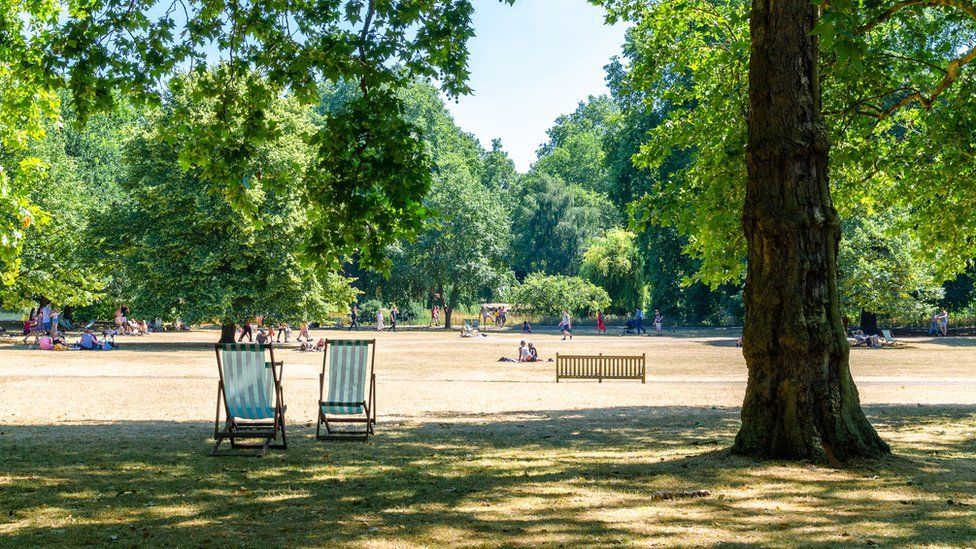 Staying in the shade will help you keep cool