European Super League: Ministers will do 'whatever it takes' to block breakaway

The government has said it will do "whatever it takes" to prevent a breakaway European Super League involving six leading English clubs.

The PM said ministers would be working to make sure the league did not go ahead in the way being proposed.

The Duke of Cambridge also said he shared fans' concerns about "the damage it risks causing to the game we love".

The 12 founding members of the league - plus three yet to join - would be permanent and never face relegation.

Arsenal, Chelsea, Liverpool, Manchester City, Manchester United and Tottenham have signed up to the plan.

Aleksander Ceferin, the president of European football's governing body, Uefa, has warned that players who play for teams in the ESL would be "banned from the World Cup and the Euros".

As opposition to the plans gathered momentum, Prince William, President of the Football Association, said in a tweet: "Now, more than ever, we must protect the entire football community - from the top level to the grassroots - and the values of competition and fairness at its core."

In a statement to MPs in the House of Commons, Culture Secretary Oliver Dowden criticised the so-called "big six" English clubs for going "against the very spirit of the game".

He added that club owners "should remember that they are only temporary custodians of these clubs and that they forget fans at their peril".

Mr Dowden said he had spoken to Uefa and the Football Association, who both oppose the move by the 12 clubs, adding that, "if they can't act, we will".

"We will put everything on the table to prevent this from happening," he told MPs. "We are examining every option from governance reform to competition law and mechanisms that allow football to take place.

"We will be reviewing everything Government does to support these clubs to play. We will do whatever it takes to protect our national game."

A fan-led review, due to take place after the pandemic, has been brought forward because of the ESL announcement, Mr Dowden said.

It will be led by former sports minister Tracey Crouch and consider how fans can have an even greater say in the oversight of the game.

The review will also look at the finances of the men's and women's game, its governance and whether an independent football regulator should be set up.

Earlier, Prime Minister Boris Johnson said the government was "going to look at everything that we can do with the football authorities to make sure that this (plan) doesn't go ahead in the way that it's currently being proposed".

Downing Street said ministers were looking at a "range of options", including a German-style system of fan ownership of clubs and clawing back coronavirus support loans.

But Labour urged ministers to do more, with shadow culture secretary Jo Stevens saying it was "time for the government to get off the subs bench and show some leadership on the pitch because we need reform of football".

She added: "It's not as if there's been a blockage here in Parliament preventing the government from taking action to sort the problems out." 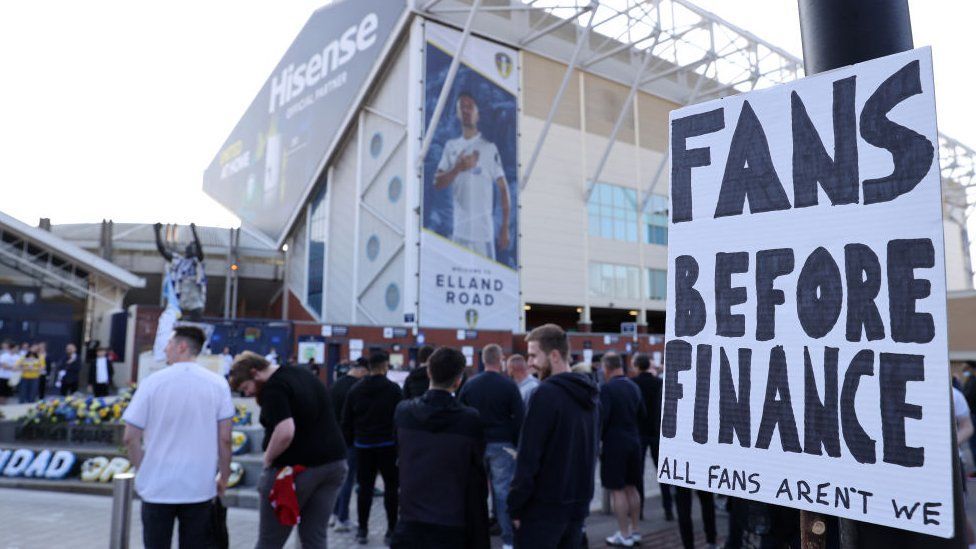 Fans and pundits have expressed revulsion at what they claim would be an unfair competition, locking others out of top European football.

Match of the Day host and former England footballer Gary Lineker said it was "a time of great concern", adding that if the ESL went ahead as planned, it would have "massive ramifications" on the domestic game.

"It will wreck the pyramid system (of leagues, promotion and relegation) that has been so important to local football clubs, communities and teams, and it takes out the competition."

Around 68% of football fans strongly oppose the creation of the ESL, while only 14% support it, according to a YouGov survey of 1,730 fans.

Some 700 football supporters gathered outside Leeds United's Elland Road ground ahead of the club's Premier League game against Liverpool to protest against the proposed new league.

The 12 founding members of the ESL said the pandemic had "accelerated the instability in the existing European football economic model".

They said there was a "need to provide higher-quality matches and additional financial resources for the overall football pyramid".

BBC's Sports Editor Dan Roan said leading figures involved in the move had yet to speak publicly about it, but behind the scenes insist it would generate much more money, not just for the clubs involved, but for the rest of the "football family".

He said they seemed "very confident" they were on a strong legal footing when it came to blocking any punishments threatened by bodies such as Uefa.

Earlier, Manchester United's shares rose within minutes of the opening bell on the New York Stock Exchange, where they are traded.

Fifteen minutes after the trading day began, they were up around 8.5%. Meanwhile, Juventus's share price jumped by more than 14% on Monday morning.

Liverpool manager Jurgen Klopp has said he remained opposed to the idea of the league, despite his club agreeing to join it.

"I like the competitive aspect of football. I like that West Ham might play in the Champions League," he said, adding that he and his players did not know about the move before it happened.

David Bernstein, a former Manchester City and FA chairman, said: "The club that I've supported since the 1950s and had the privilege of being chairman, at a time when they were in the First Division, is part of a grouping to sort of split football in this way, and destroy the pyramid of football that's so important to this country - I find, to put it mildly, very, very disappointing."