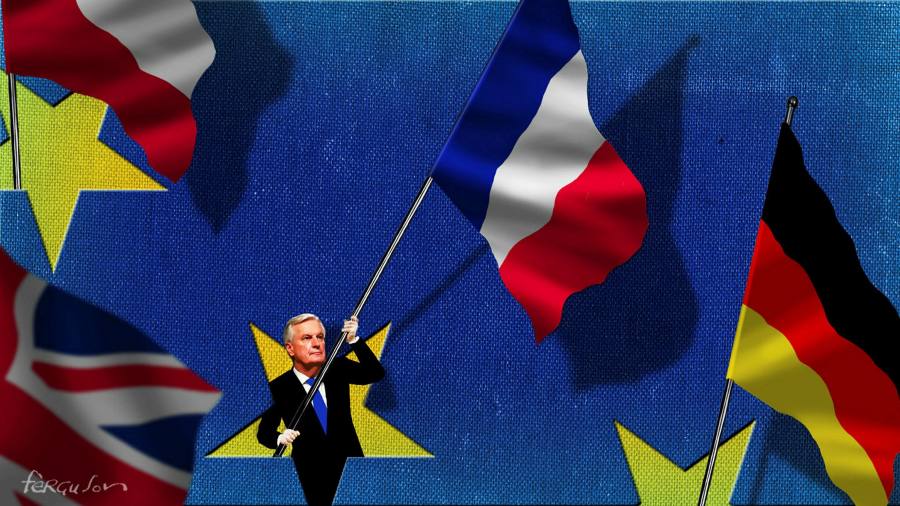 Whatever happened to Michel Barnier? As the head of the EU negotiating team on Brexit, the patrician Frenchman became famous for his insistence that the EU must never deviate from its core principles - including the supremacy of European law and the free movement of people.
Now Brexit is done and Barnier has moved on. He is running for the presidency of France and has adopted many of the ideas he once rejected. Supremacy of EU law? Barnier now has his doubts. Immigration? Barnier is calling for a moratorium of up to five years. The European ideal? Barnier warns that Germany has become too powerful within the EU.

One possible explanation for this curious volte face is that the former EU commissioner has reflected deeply on the Brexit negotiations and decided that the Brexiters had a point. An alternative theory is that Barnier has reflected deeply on his own ambition to be president of France — and has decided that the shortest route to power involves a sharp right turn, followed by a swift reversal over his own principles.

It is possible that a really good lawyer could make the statements of the two Barniers sound consistent. His current demand for a moratorium on immigration, for example, applies only to arrivals from outside the EU. But one of his former close colleagues in Brussels tells me: “What he is saying now, for example on the European Convention on Human Rights, is clearly different from what he was saying during the Brexit negotiations.”

The Barnier story is about more than the cynicism of one man. It says something important about politics in Europe. The backlash against Brussels is not confined to France. In different forms, it is cropping up all over the EU — from Warsaw to Budapest to the German constitutional court in Karlsruhe. The supremacy of EU law, a principle established in the 1960s that is fundamental to the European project, is increasingly under challenge.

One key reason for these challenges is that the EU has expanded its powers into policy areas that used to be at the heart of the nation state: borders, budgets, currency and civil rights. As a result, many politicians chafe at having to accept European legal supremacy on subjects, such as immigration, that are deeply controversial at home. This problem is compounded by the fact that the EU club now has 27 members — making it harder to agree on a common rule book that suits everyone.

Over the past 20 years, the EU has been engaged in a rolling argument over where sovereignty and power is best located: Brussels or the nation-states? This was an issue when French and Dutch voters rejected a proposed EU constitution (championed by Barnier) in 2005 because it was too integrationist. The power of the EU to demand change in a nation state was also controversial throughout the Greek debt crisis.

Sovereignty was the central issue in the Brexit campaign in Britain in 2016 — highlighted by the Leave campaign’s winning slogan: “Take back control”. Control of borders, a crucial issue for the Brexiters, has also been central to the arguments of Eurosceptics in Hungary, Poland and France.

The fact that Brexit is widely perceived as a failing project means that no other countries are currently considering leaving the EU. But the question of the powers of Brussels and the supremacy of EU law are popping up in other guises. In 2020, the German constitutional court ruled that the European Central Bank’s policy of buying the bonds of EU nations was illegal, suggesting that German judges could over-rule their European counterparts. Although Karlsruhe eventually backed off (as it tends to), its ruling encouraged the Eurosceptic governments in Poland and Hungary.

The Polish constitutional court — at the prompting of the government in Warsaw — recently ruled that Poland’s constitution outranks EU law. Unlike the Germans, the Poles were willing to escalate the conflict into an outright confrontation with Brussels.

The case is complicated by the fact that the Polish government is, in many respects, acting in bad faith. The ultra-conservative Law and Justice party has packed the court with its own loyalists — something that Brussels regards as a threat to the rule-of-law in Poland. The issues of the primacy of EU law and of the independence of the Polish judiciary have become intermingled — although, logically, they are distinct questions.

With Brussels currently threatening to cut off the flow of funds to Warsaw, there is a strong chance that the European Commission and the Polish government will eventually compromise. But, as the French election illustrates, the broader question of whether too much power now resides in Brussels will come up in other guises.

Previously it has always been assumed that power struggles between Brussels and member states would generally be resolved in favour of Brussels. “Ever closer union” seemed inevitable.

The strategic and economic arguments for deeper European integration remain powerful. But the politics look less and less favourable. Eurosceptic revolts in Britain and Poland are one thing. But when Barnier, the epitome of the “good European”, turns into a nationalist the political ground is clearly shifting. The next constitutional settlement in the EU may favour nations, not Brussels.
Add Comment