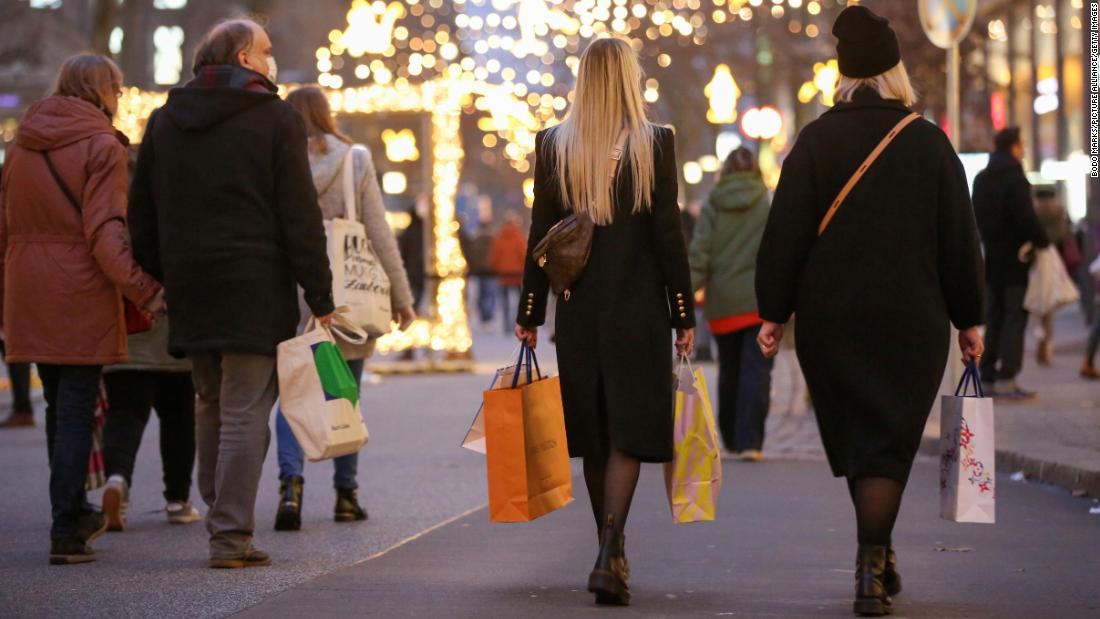 Europe's biggest economy is heading into lockdown. Will recession follow?

Germany, the fourth largest economy in the world, is heading into a national lockdown that could send it into another recession — a major warning as countries like the United States try to battle a spike in coronavirus cases over the winter.

What's happening: Chancellor Angela Merkel said Sunday that Germany will go into a "hard" lockdown starting this week and continuing through the Christmas period. Non-essential shops and schools will be shut starting on Wednesday, and Christmas gatherings will be reduced from 10 people to only five from two different households.

Economy Minister Peter Altmaier said in an interview Monday that he thinks the country can avert another recession thanks to government support measures. Reuters reports that the number of people that will work reduced hours and have wages subsidized by the state is expected to rise.

"It is possible, if we act wisely, to once again preserve the economic substance of the country," Altmaier said. But he stressed that this "depends very decisively on the further course of events."

Given the extent of new restrictions, economists are worried.

Big picture: Germany isn't the only country grappling with a spiraling health situation. South Korea has also sounded the alarm about rising cases and could announce new social distancing measures. And London's mayor is asking the government to close schools for the holidays earlier than planned given a surge in infections in the city.

In the United States, as medical workers prepare to distribute the first doses of the Pfizer-BioNTech Covid-19 vaccine, the outlook for infections and hospitalizations remains extremely concerning. The country is nearing 300,000 deaths after hitting the 200,000 mark in September.

It's a reminder that while the rollout of vaccines is an important moment in a devastating pandemic, it won't be an immediate cure for the twin health and economic crises.

"After being the relative European success story in wave one, Germany has struggled over the last few weeks," Deutsche Bank's Jim Reid said in a research note Monday. The new lockdown, he said, would deal a short-term "blow to activity and confidence, even if the damage will be limited by knowledge of the imminent vaccine rollout."

'Blank check' companies have billions to spend in 2021

On Wall Street, 2020 has become known as the year of the SPAC.

Special purpose acquisition companies, or so-called "blank check" firms tasked with cutting deals, have been all the rage. These companies raise funds from investors by going public, and then have two years to put that money to work.

According to Goldman Sachs, 206 SPACs have raised a record $70 billion in IPO proceeds this year, a fivefold increase from 2019. A record number of SPACs also announced or closed merger deals.

Remember: Companies like DraftKings and electric truck maker Lordstown Motors went public in 2020 by merging with SPACs, a faster route than a traditional IPO. Shares of both companies have skyrocketed since then, helping to drum up interest in the process.

The momentum is expected to continue into 2021, with a wall of capital still waiting to be deployed.

Goldman estimates that $61 billion in equity IPO proceeds raised by 205 SPACs "is currently searching for acquisition targets." That cash needs to find a home in 2021 or 2022, or it will have to be returned to investors.

So far, electric and autonomous car companies have been among the most popular SPAC targets. But there's only so many of those firms out there, which means the scope of interest will need to widen.

"[There's an] imbalance between supply and demand, with more capital being raised and less obvious targets," Dirk Albersmeier, JPMorgan's co-head of global mergers and acquisitions, told me.

As competition for US takeover targets heats up, more of that money could head to Europe and Asia, Albersmeier noted.

Watch this space: Massive demand for high-growth companies is already reigniting conversation about whether valuations are too stretched and heading for a fall. Demand among SPACs may only feed those fears.

With so many SPACs focused on technology, and with a limited time frame to deploy capital, would-be buyers could end up "bidding themselves up," Albersmeier said.

Pfizer and Moderna will cash in on vaccine sales

The authorization of Pfizer (PFE) and BioNTech's Covid-19 vaccine in the United States is a momentous occasion for science, the economy and humanity. It's also a big moneymaker for the companies that developed the vaccines, my CNN Business colleague Matt Egan reports.

Wall Street analysts project that Pfizer and Moderna (MRNA) — whose vaccine is next in line to be reviewed by regulators — will generate $32 billion in Covid-19 vaccine revenue next year alone.

That doesn't take into account the goodwill boost these companies will receive by helping bring an end to the worst pandemic in a century. The effect is magnified for Moderna, a young biotech company that few people had heard of before 2020.

Moderna's stock has skyrocketed 702% this year, giving the firm a market cap of $62.1 billion. Investors see the efficacy and safety results for its coronavirus vaccine as a validation of Moderna's entire pipeline of products. They're increasingly confident it won't be the company's only blockbuster.

But profits from vaccine sales are also drawing criticism. More than 1.6 million people have now died of Covid-19 globally.

"It is absolutely wrong for drug companies like Pfizer and Moderna to profiteer, and for their executives to make egregious personal fortunes, off of Covid-19 vaccines that have been so heavily subsidized and supported by American taxpayers," said Eli Zupnick, a spokesman for Accountable.US, a progressive watchdog and patient advocacy group.

OPEC is due to release its monthly report after producers agreed to start pumping more oil in January.