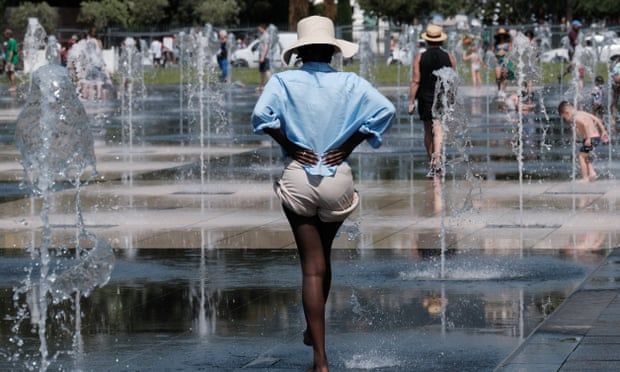 France, Spain and other western European nations braced for a sweltering weekend that is set to break records and sparked concern about forest fires and the effects of climate change.

Temperatures already nudged over 40C (104F) in parts of France on Friday.

The weather on Saturday will represent a peak of a June heatwave that is in line with warnings from scientists that such phenomena will now hit earlier than usual because of climate change.

Temperatures are due to relent slightly from Sunday, with thunderstorms forecast in parts of France and elsewhere in Europe.

But French state weather forecaster Meteo France said June temperature records had already been beaten in 11 areas on Friday and could reach as high as 42C in some areas on Saturday.

And more than 3,000 people were evacuated from the Puy du Fou theme park in central Spain due to a fierce fire nearby.

Firefighters were battling fires in several other regions, including woodlands in Catalonia, where weather conditions complicated the fight.

The Spanish prime minister, Pedro Sanchez, praised firefighters “who risk their lives on the frontline of fires” on Friday, which is also World Day to Combat Desertification and Drought.

Temperatures were above 35C Friday in most parts of the country. 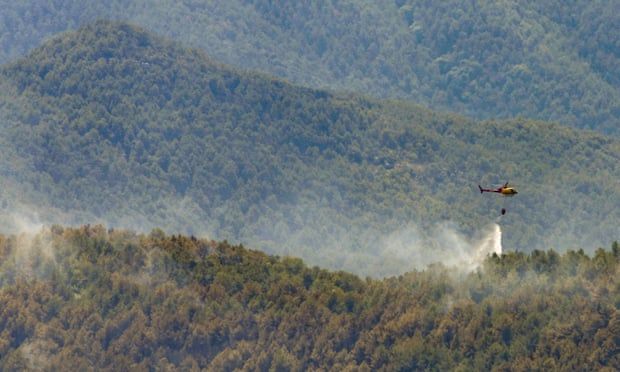 A firefighting helicopter tries to put out a forest fire in Lladurs, Spain.

– More than half of French departments were at the highest or second-highest heat alert level by the afternoon on Friday.

“Hospitals are at capacity, but are keeping up with demand,” the health minister, Brigitte Bourguignon, told reporters in Vienne, near Lyon in the south-east.

Schoolchildren were told to stay at home in departments at alert level “red” and the health ministry activated a special heatwave hotline.

The Red Cross also organised efforts to distribute fresh water to the homeless community in Toulouse, where temperatures are expected to soar to 38C on Saturday.

“There are more deaths of people in the streets in the summer than in the winter,” said volunteer Hugues Juglair, 67.

Meanwhile, rock and metal fans at the music festival Hellfest in western France were sprayed with water from hoses and enormous vaporisers in front of the stage as they headbanged to an opening-day line-up including Deftones and the Offspring.

“This is the earliest heatwave ever recorded in France” since 1947, said Matthieu Sorel, a climatologist at Meteo France.

With “many monthly or even all-time temperature records likely to be beaten in several regions”, he called the weather a “marker of climate change”.

Several towns in northern Italy have announced water rationing and the Lombardy region may declare a state of emergency as a record drought threatens harvests.

The UK recorded its hottest day of the year on Friday, with temperatures reaching over 30C in the early afternoon, meteorologists said.

It was the third day in a row that temperature records had been broken in the UK, where it was over 28C on Wednesday and 29.5C on Thursday.

Experts warned that the high temperatures were caused by worrying climate change trends.

“As a result of climate change, heatwaves are starting earlier,” said Clare Nullis, a spokeswoman for the World Meteorological Organisation in Geneva.

“What we’re witnessing today is unfortunately a foretaste of the future” if concentrations of greenhouse gases in the atmosphere continued to rise and pushed global warming towards 2C from pre-industrial levels, she added.

In France, special measures have been taken in care homes for elderly people, still haunted marked by the memory of a deadly 2003 heatwave.

Buildings are being sprayed down with water to cool them and residents are being rotated through air-conditioned rooms.

In the Gironde department, which includes Bordeaux, authorities said all public events outdoors or in non-air-conditioned venues would be banned from 2pm (12.00 GMT) on Friday, a measure set to be broadened across the region.

And speed limits in several regions, including around Paris, have been reduced to limit the concentration of harmful smog or ozone in the heat.