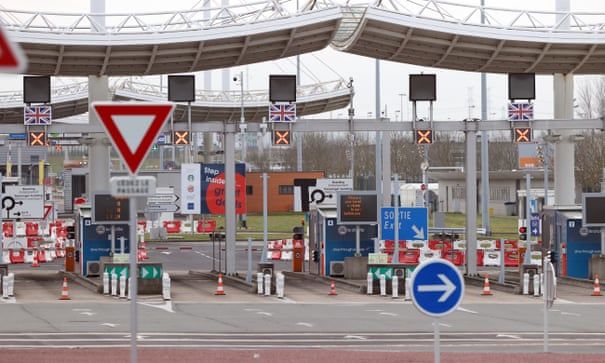 EU tourists coming to the UK have told of being fingerprinted, detained and treated like liars by border officials before trying to travel through the Channel tunnel or by ferry at Calais.

Sergio D’Alberti, a 51-year-old Italian hotel manager currently out of work due to the Covid pandemic, told the Guardian he was held for seven hours at the French port after UK Border Force officials concluded he would be a potential drain on the benefits system.

They said his €4,500 (£3,870) in funds was “not sufficient to cover all reasonable costs in relation to your being without working or accessing public funds” and that his lack of return ticket and job added to suspicion he was lying. 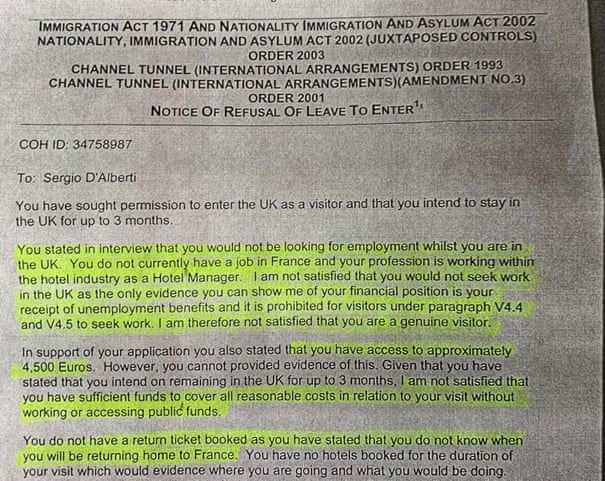 D’Alberti planned a road trip from his home in Côte d’Azur as a pleasant diversion during the pandemic on his way to Ireland to meet his wife’s family in Kerry. Instead, he said, he was held for hours, fingerprinted and photographed “like I was a criminal” as he had not booked every hotel for his trip after quarantine and he did not have a return ticket.

“It was horrible. I’m disgusted the way I have been treated. I have never been so humiliated in my life. I will never ever ever go to the UK again. To me the UK no longer exists. It is not in my vocabulary. After Calais it is the north pole,” he said.

His ordeal in Calais was matched by the experience of Angelina, a Danish pastry chef who had made a 10-hour trip from Jutland with her boyfriend. “I just went with him to visit his family. I have a job here in Denmark and was planning to stay three weeks.”

Like D’Alberti, Angelina was turned away two weeks ago but decided to return home because Border Force agents at Calais had told her that if she turned around voluntarily then her encounter with them would not be registered. They issued her with an IS81 stamp on her passport indicating “a person had made an application to enter” but no decision on that could be made because they had subsequently withdrawn it.

When she made another attempt to enter the UK, arriving at Heathrow on Sunday night, she discovered the full impact of IS81, which flagged her previous attempt, and she spent the next five hours crying in an airport detention room.

Despite her return ticket for 16 June and insistence that she was exercising her right as an EU citizen to visit the UK without a visa, she feared Border Force officials planned to expel her and prevent her from seeing her boyfriend.

She was allowed out at 10.30pm, after what she described as a “horrific” experience. Border Force officials could not explain why it took them so long, or why she had been deprived of her freedom. They had also searched her bags and questioned her about her job in Denmark and her parents.

Angelina said she felt Border Force tried to push her into saying that she was coming to live permanently and illegally in Britain. “She asked me why I was entering the UK and I said to visit my boyfriend,” she said. “She immediately said ‘live with’ your boyfriend, so I repeated ‘visit’. Already she was putting words into my mouth.”

D’Alberti, who is starting a new job in Bayonne, France, in July, claimed his unemployment status was twisted into a sinister motive for travel by officials and that his open-ended plans were treated with deep suspicion.

A spokesperson for the Home Office said: “We expect Border Force to treat all arrivals with respect and consider each passenger’s situation on an individual basis. The British public expect us to check that everyone entering the UK has the right to do so, and passengers may be asked questions to establish the basis on which they are seeking to enter the UK.”

Under immigration rules, appendix V, 4.2, the onus is on the tourist to “satisfy the decision-maker they are a genuine visitor”. 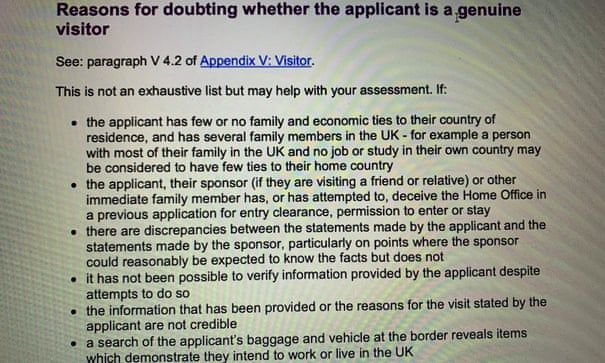 Guidelines for border officials on assessing the reasons for entry to the UK.

This means the applicant must satisfy officials that they will leave the UK after their visit; they will not live in the UK or make the UK their home; they are genuinely seeking entry for a permitted purpose; and must have sufficient funds to cover everything in their trip including return journey and any costs incurred including that of any planned private medical treatment.