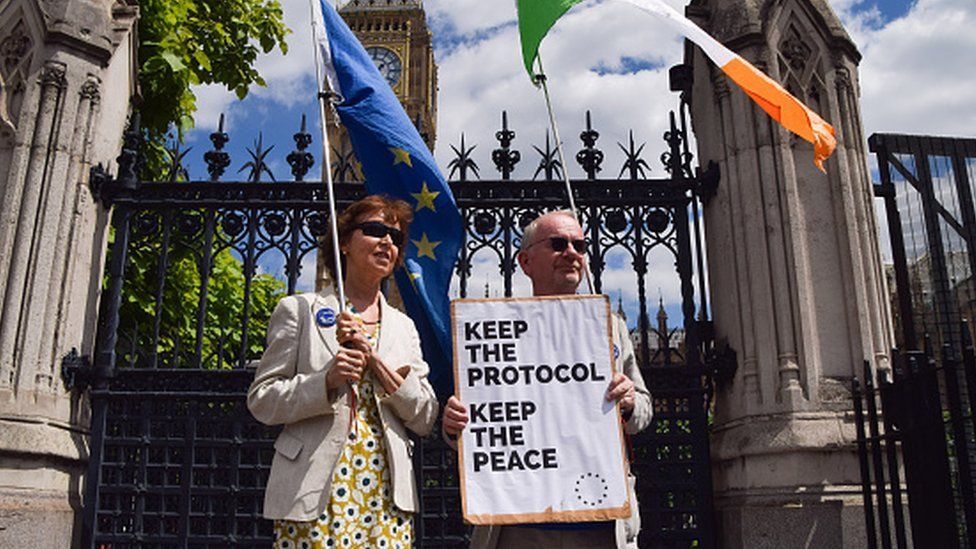 The EU has announced new legal action against the UK government over its plans to scrap parts of the post-Brexit deal for Northern Ireland.

Ministers outlined a bill on Monday aimed at unilaterally changing trade, tax and governance arrangements in the 2019 deal.

The treaty was agreed by both sides but the UK says it has disrupted trade and power-sharing in Northern Ireland.

But the EU says overriding parts of the deal would break international law.

European Commission vice-president Maros Sefcovic said there was "no legal or political justification whatsoever for unilaterally changing an international agreement".

"So let's call a spade a spade, this is illegal," Mr Sefcovic said, adding that the UK's decision "left us with no choice" but to take legal action.

Prime Minister Boris Johnson's spokesperson said his government was disappointed the EU had taken legal action and continued to favour a negotiated resolution.

The arrangement ensured free trade could continue across the Irish land border, which is a sensitive issue because of the history of conflict in Northern Ireland.

But the protocol brought in some new checks on goods moving between Great Britain and Northern Ireland and has been criticised by unionist politicians.

However, the majority of politicians elected to the Northern Ireland Assembly in last month's elections support the arrangements.

The European Commission said it would restart legal action - paused in March 2021 - over the UK's decision to delay checks on certain goods arriving into Northern Ireland from Great Britain.

The Commission also launched two new proceedings over claims the UK has failed in its obligations to share trade data and set up border inspection posts.

These legal steps could eventually lead to the UK being fined under a dispute process overseen by the European Court of Justice (ECJ).

But the dispute process can take months to complete and the Commission has insisted its "door remains open" for talks with the UK to find a resolution.

The launch of legal action by the EU may sound dramatic but this is a process stretching over many months.

UK legislation, to scrap parts of the protocol, will likewise take some time with the bill set to face resistance in Parliament.

Regardless, the stakes have been raised this week in a dispute that has been bogged down for months.

But worth noting is the emphasis from the European Commission's Maros Sefcovic that his door is open; he's saying the EU wants to talk.

However the fact remains that the two sides can't even agree on quite what they should talk about.

Demands by Britain for changes on tax and governance are a non-starter for the EU. There's more common ground on customs and the hope in Brussels is that they can show progress is possible within the terms of the existing treaty.

But the mood isn't optimistic with diplomats frequently suggesting they think the issue is mired in Tory party politics.

And if nothing changes the slow-burn passage of legal action and legislation could eventually explode into an even bigger confrontation. But as officials are keen to stress, we're not there yet.

The UK government says it would prefer to agree changes with the EU, rather than act alone to scrap parts of the protocol.

The government justified its move under a legal principle called the "doctrine of necessity", insisting the protocol was causing "peril" to society and politics in Northern Ireland.

She said her preferred alternative was negotiation but accused the EU of failing to do that "meaningfully for over two years now and that's why we've regrettably been left with no option but to take these measures".

Northern Ireland's power-sharing administration cannot be formed without the Democratic Unionist Party (DUP), which has refused to take part until reforms are made to the protocol.

Foreign Secretary Liz Truss has urged the DUP to "get on with it", but the party's leader, Sir Jeffrey Donaldson, has said that would depend on whether the bill to change the protocol passed into law.

Earlier Philippe Lamberts, a Belgium member of the European Parliament, told the BBC the protocol changes proposed by the UK were "about political posturing".

He said patience in Brussels "has been tested to the extreme by Boris Johnson".

In March 2021, the EU launched legal action against the UK for delaying the full implementation of checks on some goods, including argi-food products.

The infringement proceedings were paused last year but have now been resumed by the EU.

If the UK government does not reply within two months, the EU could take the matter to the ECJ, which has powers to impose penalties.

The EU has also launched two new actions for further alleged breaches of the protocol. 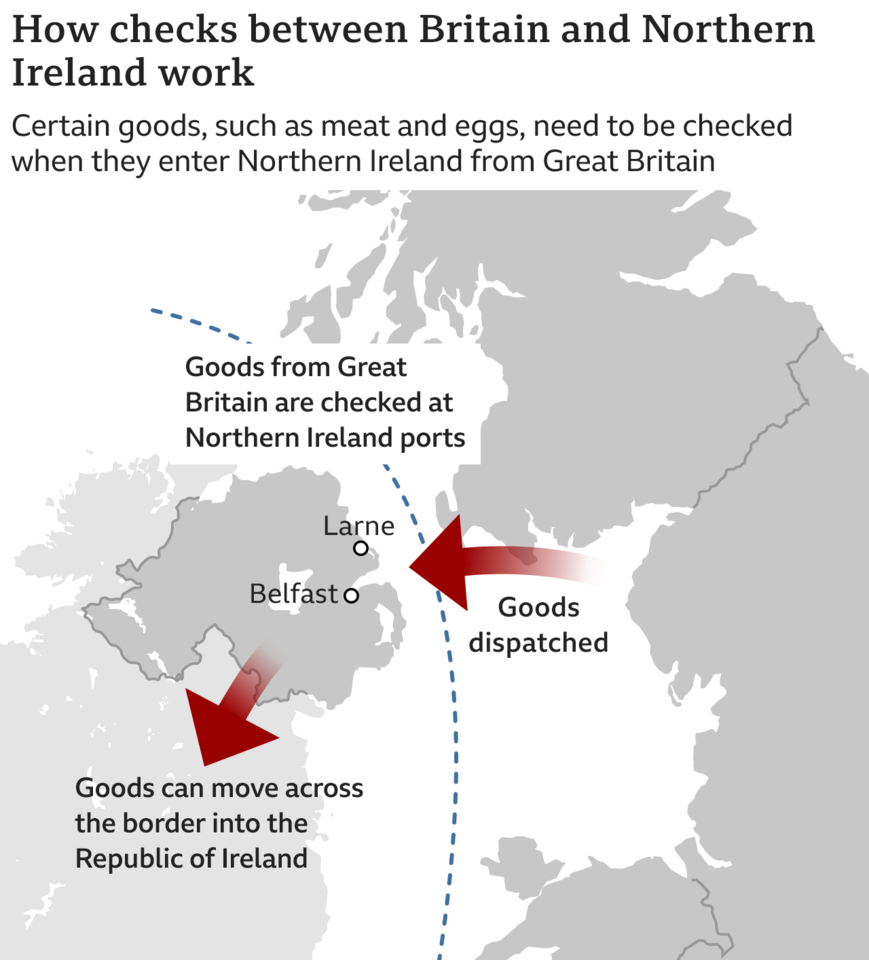 These relate to alleged UK failures to carry out its obligations under the EU's sanitary and phytosanitary (SPS) rules and "provide the EU with certain trade statistics data".

The actions do not directly relate to the UK's draft legislation, with the EU reserving the right to take further action if that law ever comes into effect.

"If this draft bill becomes law, of course I cannot exclude anything," Mr Sefcovic said.

The EU also gave more detail on its own proposals to ease checks which they say can resolve issues of concern in Northern Ireland.

These include an expanded trusted trader arrangement covering more products and companies and a cut to customs administration.

Mr Sefcovic said the proposals were "all about simplification" and at the news conference, attempted to demonstrate this by holding up three documents.

Echoing the UK prime minister's Brexit rhetoric, Mr Sefcovic said the proposals were "oven-ready", while adding this was not an "unconditional offer". 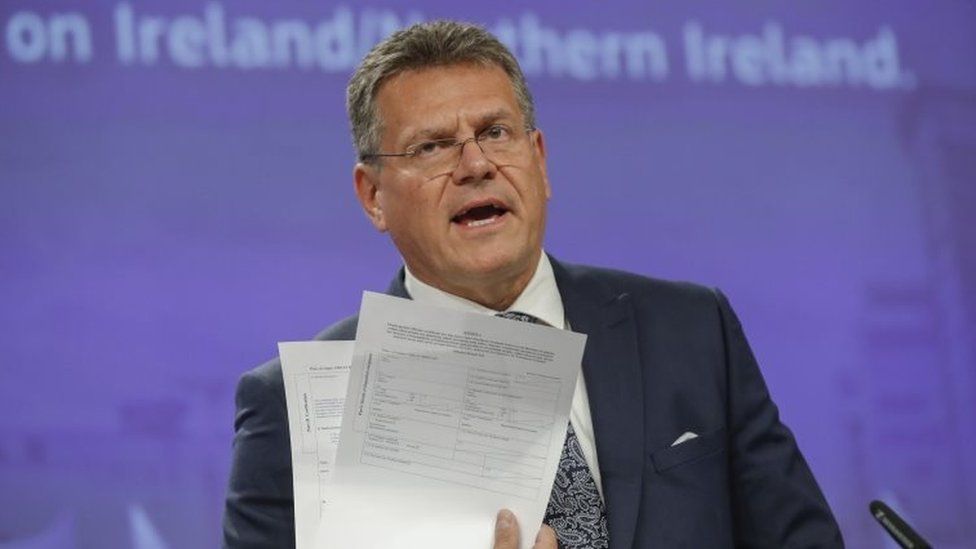 But the UK has previously rejected the EU's proposals saying they would make things worse, and if differences are not resolved, there are fears that the row over the protocol could trigger a trade war, which involves putting up barriers to the exchange of goods.

A trade war could increase costs for consumers, possibly compounding pressure on household budgets driven by inflation at 40-year highs.