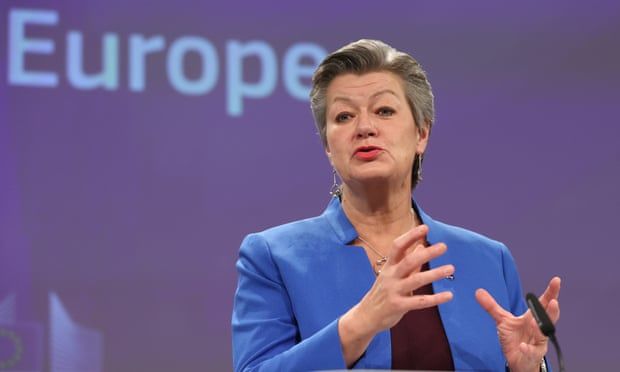 EU has ‘limited’ appetite for post-Brexit migration deal with UK

Commissioner’s stance underlines difficulty of task facing Liz Truss as she steps into David Frost’s brief
A senior EU official has said she does not expect the bloc to strike a migration deal with the UK because of disputes over the Brexit agreement.

Ylva Johansson, the European commissioner for home affairs, said EU member states had “limited” appetite for an agreement with the UK to manage asylum seekers and migrants, citing concerns over the post-Brexit trade deal and the Northern Ireland protocol.

Instead, she said, the focus should be on “practical cooperation” to curb attempts by people to cross the channel from France, such as police cooperation and intelligence sharing.

She was speaking before EU and UK negotiators clashed last week over the future of the Irish protocol, the agreement that keeps Northern Ireland in the EU’s single market, which the UK government wants to rewrite. Her comments underscore how the dispute over the protocol is damaging wider EU-UK relations, underlining the task facing the foreign secretary, Liz Truss, who took over the Brexit brief on Sunday, following the shock resignation of David Frost.

Speaking to the Guardian and other European newspapers, Johansson said: “We have quite some concerns with the implementation of the TCA [Trade and Cooperation Agreement] and the protocol on Northern Ireland right now, so I should guess that the appetite from member states to go into negotiations for a new agreement [on migration] … is limited.”

Last month 27 people drowned in the Channel trying to reach the UK from Calais, with record numbers attempting the perilous journey. The tragedy prompted an agreement between north-western European countries to toughen up action against people smugglers, although the Priti Patel, the home secretary, was disinvited from a meeting because of a Franco-British row about how to handle the issue.

Johansson stressed it was important to cooperate with the UK to tackle migrant smuggling networks operating in Germany, Belgium and France to take people to Dover. “I think the most important thing is to find practical cooperation with the UK on these topics and we have to work together on this. I think that should come first before discussing any new formal mandate for negotiating a new agreement.”

Her view contrasts with the French government, which is seeking a broader EU-UK agreement to deal with people heading to northern France seeking to reach British shores. France’s interior minister Gérald Darmanin has said France will push for a EU-UK migration treaty when taking over the bloc’s rotating presidency on 1 January. “We need to negotiate a treaty, since [the former EU negotiator] Mr [Michel] Barnier did not do so when he negotiated Brexit.”

EU member states did not discuss the Channel at a meeting earlier this month on tackling irregular migration, instead focusing on the situation at the Poland-Belarus border, where people from the Middle East have been trapped in desperate conditions, having arrived in Minsk.

The EU commissioner spoke to the home secretary last week, in what EU officials described as a “short and constructive call” where the two agreed “on the need to act in a determined fashion to address the growing phenomenon of migrants crossing the Channel, and that the priority should be to focus on practical, operational cooperation”.

Home Office sources gave a similar account of the call, stressing the need for urgent, collaborative and practical action.

During Brexit negotiations, Brussels rejected a British proposal that would have allowed the government to return asylum seekers to the EU, a right the UK had as an EU member state. In August 2020 the Home Office said the UK “will be able to negotiate its own bilateral returns arrangements” from the end of that year.

The Home Office declined to say what progress had been made in bilateral returns agreements with EU states, with officials saying they did not provide a rolling commentary.

A Home Office spokesperson said: “The tragic events that took place in the Channel last month served as a stark reminder of just how dangerous these small-boat crossings are.

We maintain that this is a global challenge and we have a shared, moral duty to address illegal migration collectively. We remain committed to working closely with our EU neighbours to find a joint solution to prevent further loss of life.”
#Priti Patel
Add Comment