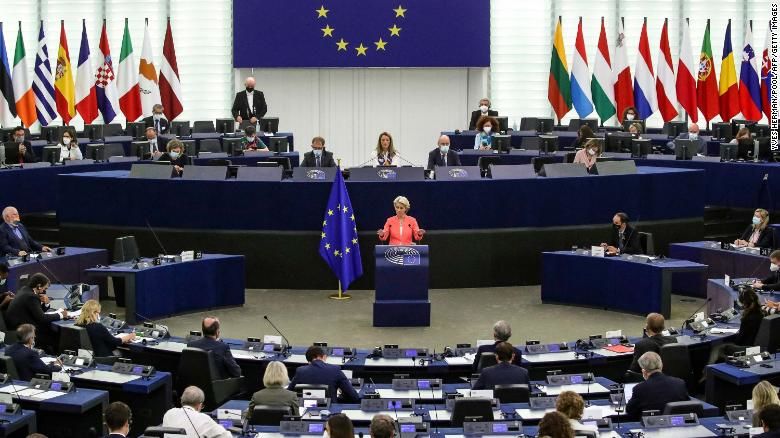 European Union chief Ursula von der Leyen sought to assert the bloc as a global leader on the climate crisis, the Covid-19 pandemic and humanitarian issues in a sweeping speech Wednesday that acknowledged an emerging new world order.

In her State of the Union address to the European Parliament in Strasbourg, France, von der Leyen called on the United States and China to increase efforts on the climate crisis, while announcing plans to challenge their dominance in digital technology, as well as compete with China's Belt and Road infrastructure initiative.

"This climate and economic leadership is central to Europe's global and security objectives. It also reflects a wider shift in world affairs at a time of transition towards a new international order," von der Leyen said.

"We are entering a new era of hyper-competitiveness. An era in which some stop at nothing to gain influence: from vaccine promises and high-interest loans, to missiles and misinformation."

The US must 'step up' on climate funds

She announced an additional €4 billion ($4.7 billion) in climate finance to transfer to developing nations over the years to 2027, while calling on the United States and the bloc's other allies to "step up" and start paying their fair share.

Developed countries agreed more than a decade ago, and reaffirmed in the 2015 Paris Agreement, to transfer $100 billion a year by 2020 to the developing world to aid their green transformations and to adapt to the impacts of climate change.

Collectively, the world missed that deadline last year. The US has been particularly criticized for transferring nothing during the four years of the Trump administration.

"Team Europe contributes €25 billion a year. But others still leave a gaping hole towards reaching the global target. So closing that gap will increase the chance of success in Glasgow," von der Leyen said, referring to the UN climate change conference COP26, scheduled for November.

"But we expect the United States and our partners to step up too," she added. "This is vital because closing the climate finance gap together, the US and the European Union would be such a strong signal for global climate leadership, and it is time to deliver now. We have no time to wait anymore." 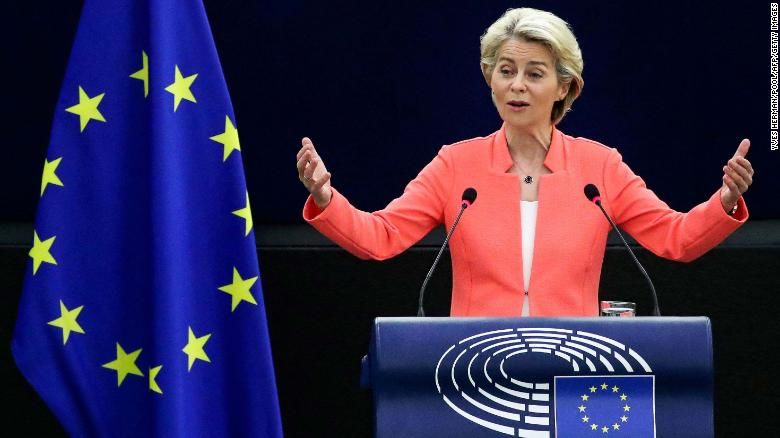 European Commission President Ursula von der Leyen delivers a speech during her State of the Union address on Wednesday in Strasbourg, France.

The Biden administration has said it will double the level of climate finance transferred in the Obama administration's second term, which averaged at around $2.8 billion, but critics -- including China and climate activists from the developing world -- say it needs to do far more to make up for four years of no finance during the Trump years.

Von der Leyen also referred to the EU's climate roadmap, known as the European Green Deal, as a model, calling on other countries to come to COP26 with similarly detailed plans.

"You've seen the complexity of the detail, but the goal is simple. We will put a price on pollution," she said.

"We will clean the energy we use. We will have smarter cars and cleaner airplanes, and we will make sure that higher climate ambition comes with more social ambition, because this must be a fair, green transition."

She also took aim at Chinese officials, urging them to peak their country's emissions by the middle of this decade. Beijing has said that it plans to peak its emissions sometime "before 2030." China has also pledged carbon neutrality by 2060.

"Every country has a responsibility. The goals that President Xi [Jinping] has set out for China are encouraging, but we call for that same leadership on setting out how China will get there," she said.

"The world would be relieved if they showed they could peak emissions by mid-decade, and move away from coal at home and abroad."

Western climate leaders, including US special climate envoy John Kerry, have been putting pressure on Beijing to reach peak emissions sooner than the end of the decade.

The country is the world's biggest consumer of coal, and in 2020, it generated more than half the world's total coal-fired power, according to a study by climate energy and research group Ember.

In her speech, von der Leyen listed the EU's achievements over the year, including vaccinating 70% of its adult population against Covid-19 while donating more shots than other countries, some 700 million, to the Global South.

She announced a donation of 200 million more vaccine doses by the middle of 2022, in addition to 250 million already pledged.

And on the situation in Afghanistan, she announced an additional €100 million to the humanitarian effort there, warning of a risk of famine if assistance did not reach people inside the country.

The EU will also start moving to improve its competitiveness with China on infrastructure through a "Global Gateway" to rival China's enormous Belt and
Road Initiative -- which spans more than 140 countries across Africa, Europe, Asia and the Americas -- with a number projects, from roads to airports and railways, as well as energy facilities.

China's projects have enabled Beijing to wield more geopolitical influence in many parts of the world. The G7 nations in June also backed a proposal from US President Joe Biden to design an initiative to rival Belt and Road.

"We will build Global Gateway partnerships with countries around the world. We want investments in quality infrastructure, connecting goods, people and services around the world," von der Leyen said. "We want to create links and not dependencies."

And to compete better with both China and the US in digital technology, von der Leyen announced a draft law to make the bloc self-sufficient in chips, such as semi-conductors, to reduce reliance on suppliers abroad.

"The aim is to jointly create a state-of-the-art European chip ecosystem, including production. That ensures our security of supply and will develop new markets for ground-breaking European tech."

On defense, von der Leyen said the EU was too militarily reliant on the US and that the bloc needed to strengthen its own forces, announcing a defense summit co-hosted by French President Emmanuel Macron. The EU has previously debated creating its own defense force.

"The more fundamental issue is, why has this not worked in the past? You can have the most advanced forces in the world but if you are never prepared to use them, what use are they?," she said.

"What has held us back until now is not just shortfalls of capacity, it is a lack of political will."