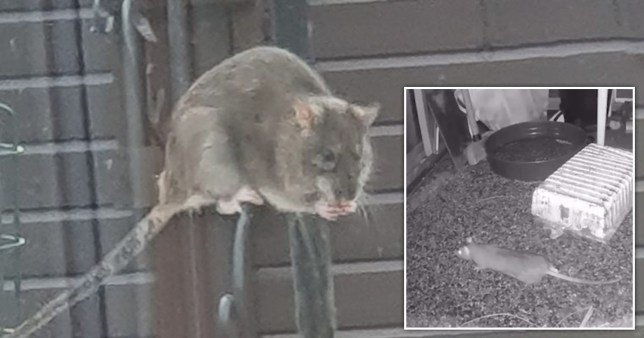 They claim some of the rats are so big they are the size of small cats.

Pictures show some of the rats in Hattersley, Tameside, Manchester.

Residents say they have contacted Tameside council about the infestation and were told they needed to ring pest control experts – and pay £80 each time.

Mum-of-two Becci, who has lived in Hattersley for three years, says she has contacted pest control around three times in that period.

She says the rodents continue to return to her home every time, and that the problem is causing her countless sleepless nights.

‘The whole estate is just absolutely overrun by rats now,’ she said.

‘When I first moved here there was one living under my floorboards, but now there are more of them. I spoke to my neighbour and she said it’s the same in her house.

‘Recently, it seems to have become a problem for everyone living here.’

Becci says she has had to call pest control several times and has laid traps and poison in her garden, but nothing seems to be working.

‘It is pointless us doing one thing because nothing else is being done and it just becomes a vicious cycle,’ she added.

‘When I moved in, I had sentimental items in my attic and they have all been ruined by the rats.

‘I am worried because they can chew through things like wires which is obviously a fire hazard. I have a dog as well so I worry about what he might catch from them.’

Becci says the infestation has become so bad that she’s scared to open her back door as she fears letting more rodents inside her house. 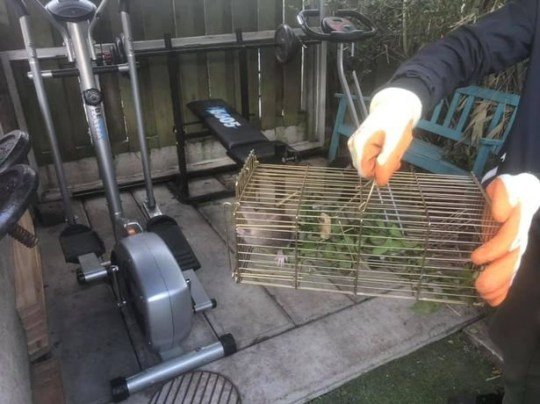 One of the rats which was caught

‘You can hear them squealing and running about at night, it’s awful. We are all losing sleep over it,’ she said.

One woman said she counted eight rats in her garden. Another said she spotted several in the bushes in the Tesco car park.

Dylan Longmate runs the local Facebook group. He said he first noticed the issue at the beginning of lockdown in March.

‘I noticed something rustling in my garden and when I went out I found several rats,’ he said.

‘I posted about it on the Facebook group and within an hour over 100 people commented saying it had been an absolute nightmare for them.

‘I told people to ring the council which is what I did and they told me they couldn’t do pest control for the whole estate and if we wanted them to come out we would have to pay ourselves.

‘But people can’t afford to keep paying £80 each time.’

Dylan says the rats are scattered across the entire estate and that it has become a major problem for everyone living there.

‘You can be walking down the street and the next thing you see a rat running down the road. It is absolutely awful,’ he said.

‘Some of these rats are the size of small cats. They could be carrying all kinds of infections and diseases which can then be passed on to residents and their pets.

‘I think there needs to be a major pest control intervention of the whole estate. We need to do something big to get rid of them.’

A Tameside Council spokesperson said: ‘We have received only two complaints on this issue but have been working hard to eradicate the problem on the estate, including carrying out a sewer baiting programme.

‘We are putting together a full on the ground response following the concerns being raised and will do whatever it take to resolve the problem.

‘If residents have any individual concerns they can contact our call centre on 0161 342 8355 to arrange a survey.

‘We need the local community to work with us on tackling this by ensuring their waste is disposed of responsibly, to help eradicate the problem. We have teams out every day clearing and investigating fly tipping and taking enforcement action. Fly tipping is illegal and can be hazardous, as well as it being extremely expensive for the council, on limited resources, to clear waste dumped by others.’