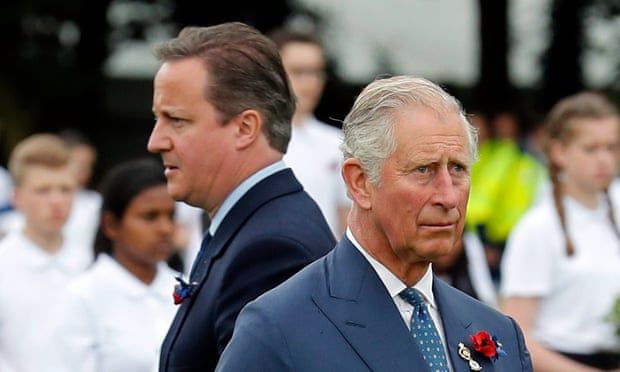 David Cameron has said it was “entirely right” for King Charles to have written to ministers and politicians when he was heir to the throne, lobbying on key issues including bovine tuberculosis and herbal medicines.

In an interview with the BBC’s Sunday with Laura Kuenssberg programme, Cameron said he never felt Charles – whose “black spider memos” to ministers were released after a 10-year legal battle – had interfered in politics.

“I never felt he tried to influence me improperly in any way,” the former prime minister said. “I think the heir to the throne has a perfect right to have interest in issues like the environment, preserving wildlife, his interest in the built environment. Many of the causes he took up back in the 60s and 70s might have looked rather fringe but he picked his subject superbly, became an expert in things like climate change and the environment long before politicians.

“I think it is entirely right that the heir to the throne can discuss things with politicians. Why not? I don’t think there should be any public concern about that and my view is the letters should have remained private.”

In memos between Charles and senior government ministers sent in 2004 and 2005 and released in 2015, Charles argued on issues including the design of new hospitals and on an EU directive limiting the use of herbal alternative medicines.

Cameron revealed that Charles practised having audiences with him as prime minister while he was Prince of Wales, in order to be prepared to accede to the throne.

“I had audiences with Prince Charles when Queen Elizabeth II was on the throne because he wanted to start thinking about how to conduct those audiences,” he said. “From what I saw he will be brilliant at that job. Brilliant at listening, brilliant at asking questions, giving wise advice and sage counsel. This has probably been the longest apprenticeship in history.”

Cameron also said Boris Johnson had been “welcomed as the newest member of the club” of ex-prime ministers when he and his predecessors met at the accession council on Saturday. “It’s the club that no one wants to join and you never get to leave,” he said.

Cameron was interviewed on the programme along with two other former prime ministers, Theresa May and Gordon Brown. Brown said he believed Charles would change the monarchy.

“I think that what Prince Charles has already indicated is that the monarchy will be smaller. It’s going to be more like a Scandinavian monarchy in the future, but not in a bad way – more informal,” he said.

“He stopped as he entered Buckingham Palace and talked to people in the crowd, and that was a signal that he was sending that he wanted people to feel that he was approachable.”

May also predicted the monarchy would begin to change under Charles. “They have been steadily evolving a different approach, a different way of doing things over time and I am sure King Charles will continue to take that forward,” she said.

“Of course, he is a different person and he may want to change things in some ways, but I think, critically, as the Queen did, any change in the way things are done would be done gradually and very carefully.”

Cameron recalled having to apologise to the Queen after a broadcast mic picked up him saying she had “purred down the line” when told about the Scottish referendum result in 2014.

“It was a very upfront and fulsome apology done very quickly at the beginning of an audience. I think that is all I should say,” he said. “From ever onwards I have been more careful when cameras and microphones are around and I have learned my lesson.”

Asked if the Queen had told him off, Cameron replied: “Obviously everything said at those meetings is entirely private.”