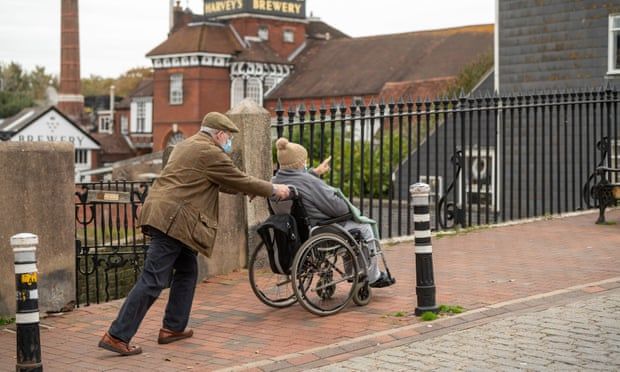 The move will save the government hundreds of millions of pounds but leave many poorer homeowners exposed to “catastrophic costs” including the need to sell their homes to cover long-term care, analysts said.

Amid a barrage of criticism on Wednesday night, Boris Johnson was warned that MPs in the so-called red wall could revolt when the changes are put to a vote.

In September the prime minister announced a £86,000 cap on the amount anyone in England would pay for social care, saying: “The state should target its help at protecting people against the catastrophic fear of losing everything to pay for the cost of their care, and that is what this government will do.”

The cap was expected to amount to a combination of all care costs including means-tested council funding. But on Wednesday, while MPs at Westminster were focused on the scandal over MPs’ second jobs, the Department of Health and Social Care said only private contributions would be counted.

That means that a pensioner with a £90,000 home in Burnley who qualifies for council help could pay the same for their care out of their own pocket as someone with property worth £250,000 or more in Surrey who is too wealthy for means-tested assistance. Care bills could still eat into almost all of their assets, forcing the sale of the house.

Labour said the government had “failed to be straight” with elderly people and described the care costs cap as a “con”. It said the announcement was “sneaked out today under a cloud of Tory sleaze”.

The decision also goes against the recommendations of Sir Andrew Dilnot, the economist who devised the cap proposals and has previously described the approach now being taken by ministers as “unfair for those on low incomes”. Dilnot is preparing to give evidence to MPs on social care reform on Thursday.

Torsten Bell, director of the Resolution Foundation thinktank, said: “if you own a £1m house in the home counties, over 90% of your assets are protected. If you’ve got a terrace house in Hartlepool worth £70,000 you can lose almost everything.”

He added: “I’m really not sure the government’s thought this through. They might not actually win the vote – Conservative MPs in [the] north and Midlands have just been told the cap on care costs will do far less for their constituents who could still lose almost everything.”

The DHSC defended the change and insisted it “will mean everyone is better off”. “Compared to the current system more people will be supported with their social care costs, have greater certainty over what they need to pay and receive higher quality care,” a spokesperson said.

Analysts said the move could save the government hundreds of millions of pounds from the estimated £3bn cost of the cap, but the savings were being taken from people with low to moderate wealth not richer people.

“These changes will mean that the people who need the most protection from catastrophically high care costs – those with low to moderate levels of wealth – will get less protection than wealthier people,” said Sally Warren, director of policy at the King’s Fund thinktank.

“They may well wonder why the prime minister’s promise that no one need sell their house to pay for care will benefit wealthier people but doesn’t seem to apply to them. The government was brave in raising taxes to fund the long-overdue reform of social care but, having taken two steps forward, has now taken one step back.”

At any one time, tens of thousands of people receiving care have such limited assets that they get means-tested help and so will be affected directly by the proposals. Hundreds of thousands of people who may never need social care will nevertheless be worried about being caught by the new system if they eventually require help. It effectively means some people with lesser assets don’t benefit from the cap at all.

“The proposed amendments to the Care Act mean reforms will no longer protect those with lower wealth from catastrophic costs,” said Charles Tallack at the Health Foundation thinktank. “The changes seem motivated by the desire to save money but do so by taking protection away from poorer homeowners.”

Warren also said that people who will lose out the most are in the former red wall seats. “Average house prices in these constituencies is £160,000 compared to £270,000 in traditional Conservative seats,” she said. “The median house price in Hartlepool – the last red wall seat to fall – is £128,000.”

In September the government announced a 1.25% rise in national insurance, dubbed the health and social care levy, part of which is to be used to fund the social care cap. Johnson acknowledged the “anxiety that affects millions of people up and down the country, the fear that a condition like dementia, one of nature’s bolts from the blue could lead to the total liquidation of their assets, their lifetime savings, their home – the loss of everything that they might otherwise pass on to their children”.

The new approach will require amending the Care Act with parliamentary approval. The government said in an update published online that the “much more generous means test is the main means of helping people with lower levels of assets”.

The point at which people become eligible to receive some financial support from their local authority will rise to assets worth £100,000 from the current £23,250. Anyone with assets between £20,000 and £100,000 will be eligible for some means-tested support.

Liz Kendall, the shadow social care minister, said the change “shows Boris Johnson’s so-called cap on care costs is an even bigger con than we initially thought. We already knew most people won’t hit the cap because it doesn’t cover board and lodging in care homes, and that at £86,000 the cap would still mean many people will have to sell their homes to pay for their care – against everything Boris Johnson promised.

“It has now been revealed that the poorest pensioners will have to pay even more, something Andrew Dilnot – who proposed the cap – explicitly ruled out because it was so unfair. That this Tory government has failed to be straight with those who’ve given so much to our country is a total disgrace, but utterly unsurprising. Our elderly people deserve better.”
#Boris Johnson  #Johnson
Add Comment