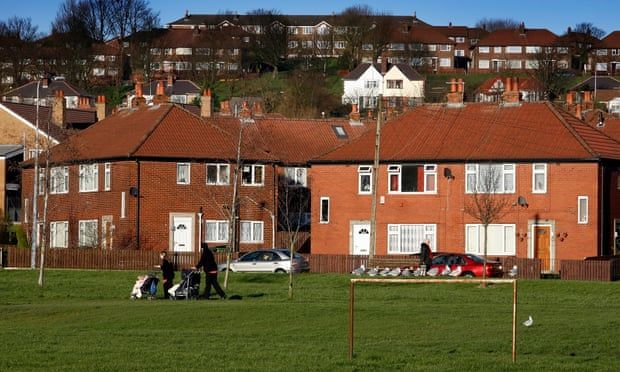 England’s poorest neighbourhoods have by far the biggest shortages of basic social infrastructure such as parks, playgrounds, pubs, shops and sports facilities – and are least likely to get government funding to renew their community, a study has found.

An audit of public assets in the 10% worst-off council wards – known as “left behind neighbourhoods” – found they had disproportionately fewer public spaces and buildings, and were less than half as likely to have charities and community groups in their local area.

Eight wards had no shops at all in their neighbourhoods or within 1km of the local area, while three had no public parks, gardens or playing fields, according to the study, carried out for the all-party parliamentary group (APPG) on left behind neighbourhoods.

“A number of left behind neighbourhoods are entirely lacking in shops, cultural assets and open spaces that provide places for people to meet and engage in community life,” the report says.

The 225 left behind neighbourhoods are overwhelmingly concentrated in the north of England and the Midlands, typically on the outskirts of post-industrial towns and cities, many in red-wall areas, as well as in coastal areas of the south-east. They are home to about 2.4 million people. 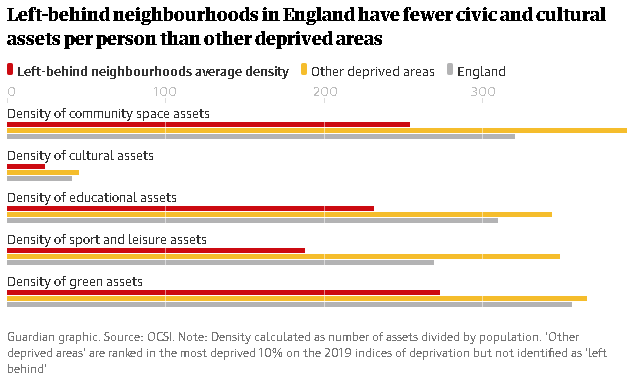 Four neighbourhoods are highlighted by the report as having especially low densities of community assets, from parks to pubs: Breightmet in Bolton, Greater Manchester; Norton South in Halton, Cheshire; Sheppey East in Swale, Kent; and Yarmouth North in Great Yarmouth, Norfolk.

The APPG says poor social infrastructure in these areas – already the “most deprived of the deprived” – overlays years of poor health, jobs and education outcomes, and inadequate digital and transport infrastructure, and must be tackled by government plans to “level up” communities.

The APPG has called on ministers to create a bespoke community wealth fund to target investment on these areas to build up social infrastructure, warning that the government’s current “levelling up” funds, which concentrate on city centres’ large-scale infrastructure projects, will bypass these neighbourhoods.

The scarcity of “social focal points” hampered these neighbourhoods’ ability to respond to the pandemic, the report says. They received disproportionately fewer Covid-19 emergency grants, in part because a lack of local charities and community groups meant they were less able to apply for them.

The consequences of a weak voluntary sector were also felt in the community response to the Covid crisis. While thousands of mutual aid groups sprang up in more affluent areas across England to help vulnerable people who were shielding, just 24 were created in left behind neighbourhoods.

Other outlying neighbourhoods highlighted by the report include:

*  Manor House ward, Hartlepool, which has the fewest community halls, churches, and youth clubs per population.

*  Talavera ward in Northampton, which has the lowest level of pubs and nightclubs, leisure centres, theatres and cinemas.

*  Greenhill in Leicestershire and Hemlington in Middlesbrough, which along with Breightmet in Bolton all have no community green spaces.

Paul Howell, the Tory MP for Sedgefield in County Durham and co-chair of the APPG, said: “The government has created a number of new funds aimed at levelling up to support those areas of the country that most need investment, but unfortunately these 225 neighbourhoods are set to lose out once again if they do not receive targeted funds to help build the skills and capacity of the people living there to come together and apply for funding.” 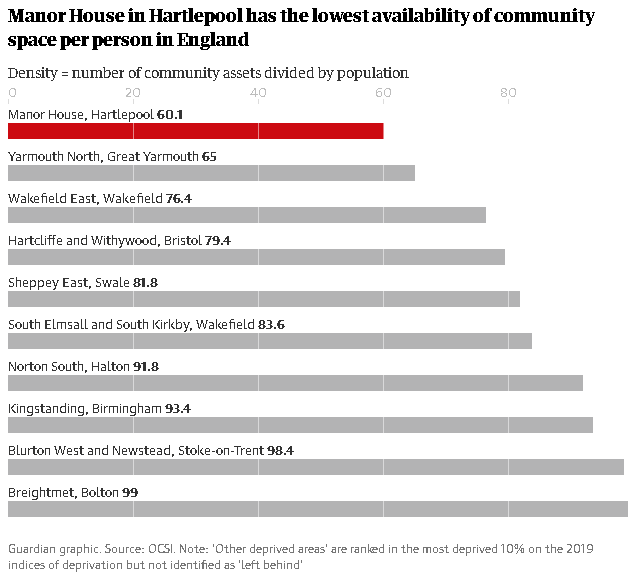 Dame Diana Johnson MP, the Labour co-chair of the APPG, said many of the problems faced by left behind neighbourhoods were deep-rooted, though work to tackle them had stopped as a result of austerity cuts, alongside cuts to school, police and youth clubs. “As a northern MP I’m absolutely committed to big infrastructure projects – I want them. But what we are talking about is building up local communities.”

Alison Jones, the development manager at community group Little Hulton Big Local in Salford, Greater Manchester, said: “Communities, particularly those identified as being left behind, are ambitious for their local area but do not always have the knowledge, skills or access to funding needed to make local projects happen.”

A spokesperson for the Ministry of Housing, Communities and Local Government said: “The government is levelling up all areas of the country, with billions of pounds of investment to support and regenerate communities.

“We will publish a levelling-up white paper later this year, setting out bold new policy interventions to help improve livelihoods, spread opportunity and drive economic growth – all as part of our efforts to build back better from the pandemic.”