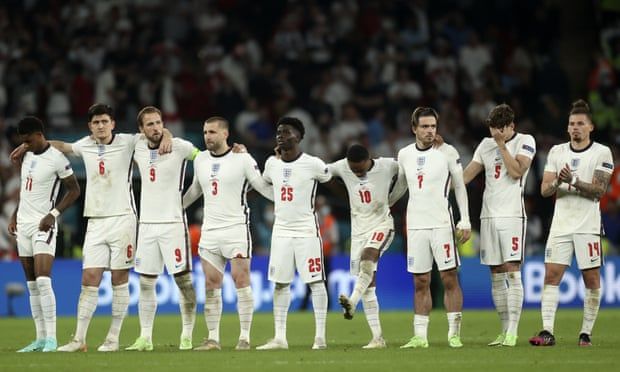 England may have lost, but Southgate’s team shows us the nation we can be

The practical and moral argument that our diversity is our strength has long been made. This team proves it
And so we lost. After the shock and the grief, then, I guess, there is reflection and reckoning. There’s sadness for Gareth Southgate and his squad, who have shown themselves to be brilliant sportsmen with the mental and technical excellence to succeed on the field of play at a rarefied level. But we should all be a bit sad today, even those with little or no interest in football. This was about so much more than football.

If we had won, we would have brought home a trophy, had a rollicking great time and even, and this is ludicrous, a day off gifted to us by government. But what seemed more important to me was that this would have been an opportunity for catharsis.

Culturally and politically, we have been trying to progress with eyes stuck on a rear-view mirror reflecting scenes from a World Cup win in 1966. Having very publicly shown the world that we can come out on top again, we could have overcome this vitality-sapping desire to replicate how we were when we were great, so we could be on the way to being great again.

We need something to prompt reevaluation: young Englishmen becoming champions of Europe, throwing off our hoodoo and pointing, with freshness and enthusiasm to a new direction, could have been that marvellous catalyst.

Of course, we have had this chance before. Alas we didn’t really take it. Think back to the 2012 Olympics, when we had the world’s biggest stage and showed the cultural and organisational excellence and flair of which we are capable.

Forget for a moment the idiot prime minister. These days he seeks to align himself with our footballers by parading a bespoke England shirt, hoping we’ll forget how he briefly aligned himself with those who said these touchy feely take-the-knee players were insufferably woke. Back in 2012, as London mayor, he was just as clownish, waffling on about table tennis and whiff-whaff.

Think instead about how we projected ourselves through Danny Boyle’s extraordinary, daring opening show, fusing a pride in our history with a warm, honest and clear-sighted account of who and where we are now. Think, as Japan’s Covid Games lurches from crisis to crisis, about the excellence of the project itself, an Olympics without a significant blunder: buildings erected on time, stadiums created from scratch, regeneration of what was then one of the country’s poorest districts kickstarted and continuing.

There were naysayers, particularly those who condemned the diversity and inclusivity projected by Boyle’s opening show as “woke”, though they had yet to adopt the noxious terminology. Back then everything they didn’t like or felt threatened by was “politically correct”. Still, most others were proud to see a presentation to the world of not exactly who we are – it was too perfect for that – but a snapshot of the modern nation we would like to be.

The ensuing tragedy was that we didn’t exploit the potential of that moment and before long we were consumed by the painful divisions of austerity and the social splintering of Brexit. So we have had sight of a reset button before. We just never pushed it. With the World Cup next year, can this England team carve out another opportunity for appraisal, perhaps renewal? We must hope it can, not least because our politics seems incapable.

There is still reason for hope. As a British, black Londoner, son of Windrush generation, working-class parents, I – like so many others with different stories – find it has never been easier to support an England team. It’s southern, it’s northern, it’s black, it’s white, it is of mixed heritage, it’s young, it’s experienced, I’m guessing it’s multi-denominational. It has players who excel at their jobs and earn a fortune doing them but try in various ways to ground themselves in the lives of the society of which they are a feted part. They do good things, we read about them in the tabloids, they do stupid things, we read about them in the tabloids. They sport silly tattoos, some have silly haircuts. In short, they are instantly recognisable as young Britain right now, as seen daily – in shape and form, if not in outsized wealth – on every UK high street. Some of us have long made the practical and moral argument that Britain’s diversity is its strength. This England team makes that case.

As for Gareth Southgate, he has been feted and rightly so, but the extent to which tabloids deify him says much about our predicament. To me, he is just a prominent example of a British type we used to revere: thoughtful, strong-willed and confident but not flashy, centred, emotionally intelligent and decent. If he seems exceptional now, that’s not just about him but also because our lives are being shaped by characters who mask any pretension to decency or seriousness or even intelligence to succeed in the pantomime that is political life.

Worth noting that, away from the hullabaloo, there are others like Southgate in our world-beating creative arts, in public administration, in our big and small commercial companies, and together they support one conclusion; there really is no need in our public sphere for so much showboating and immaturity.

So we lost on Sunday, and that’s a shame. Instead of glory and a cup, a near miss and a bit more baggage. But don’t blame the players. They did their bit and they’ll do their bit again. Perhaps the best way to show thanks would be to fashion a fair, progressive and confident country at one with the team.
#Covid
Add Comment