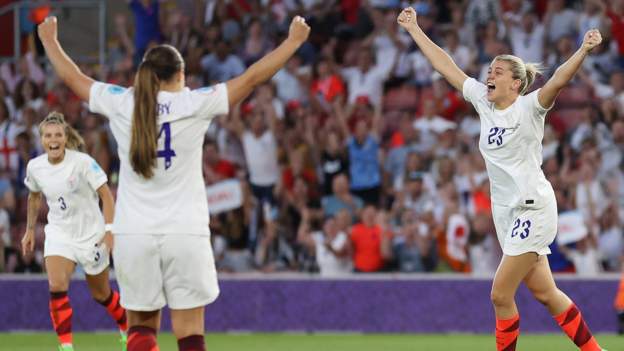 England finish group stage in style as NI bow out

England wrapped up an impressive group stage at Euro 2022 as they comfortably beat Northern Ireland having already qualified for the quarter-finals.

The Lionesses, who finish top of Group A, will go into the last eight having not conceded a single goal and with three wins from three games.

Northern Ireland, who were competing in their first women's major tournament, finish bottom of the group without a win.

It was not a home nations derby with much on the line but England were heavy favourites and were expected to demonstrate why in Southampton.

With manager Sarina Wiegman absent after testing positive for Covid on Friday, England were frustrated in the early stages at St Mary's Stadium but soon imposed their quality.

Chelsea's Fran Kirby produced a piece of magic to break the deadlock when she expertly curled the ball into the top corner, before Mead precisely drilled in a low strike to make it 2-0 before half-time.

Russo came off the bench to score for the second consecutive game, nodding in Mead's chipped cross, before spinning away and slotting in a second goal in five minutes.

An own goal from Northern Ireland's Kelsie Burrows, who flicked Mead's cross over goalkeeper Jackie Burns, completed the rout.

Northern Ireland struggled to compete after the break but had shown glimpses of threat in the first half - Lauren Wade tested goalkeeper Mary Earps from close range, while Rebecca Holloway played some teasing through balls.

Kenny Shiels' side leave the tournament with plenty of lessons to learn, but their fans were in celebratory mood as they chanted, banged drums and stood for almost the entirety of their final game at Euro 2022.

For England, a quarter-final against Spain or Denmark awaits next Wednesday, and they strengthened their status as a team few will want to face en route to the final.

England in perfect shape for quarter-finals

Wiegman said beforehand not to expect changes as she wanted England to continue their "rhythm" and build momentum for Wednesday's quarter-final.

It was the same starting XI who ruthlessly thumped eight goals past Norway on Monday, and though they took time to settle they became more familiar as the game went on.

Those connections have been getting stronger each month under Wiegman and as England extend their unbeaten run to 16 matches, conceding just three goals in 11 months, they could not be in better shape for the knockout stage.

Mead and Russo could have bagged hat-tricks, while Lauren Hemp produced arguably her best performance at Euro 2022.

The introductions of the substitutes did not disrupt England's intensity either, adding threats in other areas and emphasising the depth of quality available to Wiegman.

England were favourites to top Group A, and have done so very comfortably. 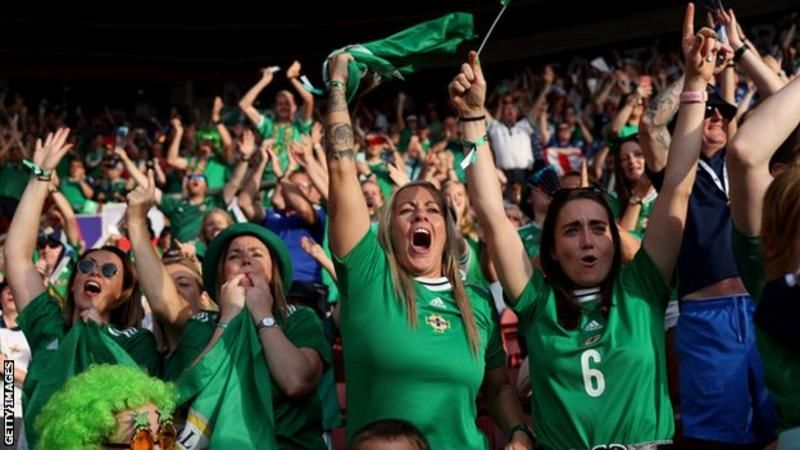 Northern Ireland's exit from the competition was already confirmed but their fans, draped in green, poured into St Mary's ready to party.

This was a celebration of a team who, ranked 47th in the world, were only introduced into a full-time set-up seven months ago.

They defied the odds to qualify for their first major tournament, and though they were unable to make a dent on Group A, they gave their supporters plenty to cheer.

"Northern Ireland" chants were heard throughout the 90 minutes - heard most loudly after their side conceded - and it was the visitors who were dancing at full-time, arm-in-arm, as England's players calmly applauded fans in a low-key lap of honour.

Flags with 'GAWA' - green and white army - on them were laid before Northern Ireland's players, who stood in a huddle in the corner posing for photos with their supporters.

This will not be a tournament for them to forget, despite results not being kind. Shiels had hoped his players would "make the nation proud", and the outpouring of appreciation from their supporters at full-time suggested it was mission accomplished.