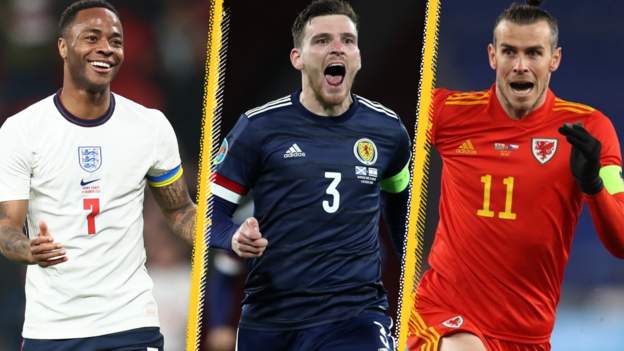 England could face Scotland or Wales at World Cup

England could face Scotland or Wales at the Fifa World Cup Qatar 2022 after the draw for the tournament's finals was made on Friday.

One of Wales, Scotland or Ukraine will go into Group B after the remaining European play-off path is completed.

Iran and the USA have also been drawn in England's group.

The World Cup takes place between 21 November and 18 December in Qatar, with the hosts playing Ecuador in the tournament's opening game.

England's first fixture, taking place on the same day, sees them take on Iran. The two sides have never met in a senior men's competitive international.

The game will take place eight days after the Premier League begins a six-week break.

Reigning champions France are in Group D while Brazil, who returned to number one in the Fifa world rankings on 31 March, are in Group G.

Wales, seeking to reach their first World Cup since 1958, will have to overcome the winners of Scotland and Ukraine in the play-off final in June.

However, that semi-final - which had been scheduled to take place on 24 March at Hampden - was postponed because of Russia's invasion of Ukraine.

When do England play?

After playing Iran on 21 November, England play the USA on 25 November before finishing their Group B campaign on 29 November against one of Scotland, Wales or Ukraine.

The winner of the remaining European play-off will open their World Cup campaign against the USA on the first day of the tournament.

Should Scotland progress they will play England at a World Cup finals for the first time. The two sides met at last summer's Euro 2020 tournament with the game ending goalless.

Wales and England have never met at a World Cup finals either. England won 2-1 when the sides met in the group stage at Euro 2016.

"When you're seeded you get the advantage of missing out on those big six or seven teams. Most of the first seeds would be pleased with the group they get.

"The USA are an interesting one. They've got some very good players and we know what they could be capable of, so that one in particular is an intriguing one."

The winner of England's group could meet world champions France in the quarter-finals.

Topping Group B means a last-16 game with the runners up in Group A, which contains the Netherlands, Ecuador, Senegal and hosts Qatar.

Should France top Group D they will face the runners-up in Group C, which features Argentina, Saudi Arabia, Mexico and Poland.

What else stands out?

Group E sees former world champions Spain and Germany drawn together. They will meet in their second group game on 27 November.

Belgium are in Group F alongside 2018 runners-up Croatia.

Cristiano Ronaldo's Portugal are in Group H, which also sees Ghana and Uruguay meet in a rematch of the controversial 2010 World Cup quarter-final tie.

In that game, Luis Suarez handled on the line to deny the Ghanaians a winner in the last minute of extra time.

'England can have no complaints'

England will understandably make all the right noises about just how difficult their World Cup group in Qatar will be, but no-one can deny it could have been a lot more difficult for Gareth Southgate's side.

For all the unpredictability of the World Cup, as demonstrated frequently over the years, England will have no complaints whatsoever, given what they could have been presented with.

The United States will call on history - they beat England in the 1950 World Cup and drew in South Africa in 2010 - but reality insists they will be huge underdogs, even if they have a very respectable Fifa ranking of 15th.

England open against Iran and face what might well be their toughest challenge in the final game when they will meet either Wales, Scotland or Ukraine.

Each of those potential fixtures will have its own emotional currency, as demonstrated by passionate, tightly contested games with Wales and Scotland at Euro 2016 and Euro 2020 respectively. England only saw off Wales with a last-minute winner from Daniel Sturridge in France, while the improving Scots got a fully deserved draw at Wembley last summer.

Ukraine, meanwhile, will have support from around the globe, as well as talent in their side - but, make no mistake, England will be quietly satisfied with what the draw has thrown their way, in the group stage at least.

'We can look ahead with optimism' - Wales & Scotland reaction

Former Wales captain Ashley Williams on BBC Radio 5 Live: "We were the most successful Wales squad, getting to the Euro 2016 semi-finals, but we didn't get to a World Cup. Just getting there would be a box ticked for Wales. If they manage to get there you're feeling a bit like we have a good chance.

"Let's not get carried away but we can look at it with some optimism. There could have been a worse group."

Former Scotland forward James McFadden: "Scotland are in a really good place at the minute.

"The performance at Wembley in the Euros was really good and we got slaughtered for celebrating a 0-0 draw, but it was a great performance and showed the potential of the young team.

"Now we have a strong squad and optimism we can get the job done. The response from the players and manager [since the Euros] has been outstanding."

Why don't we know all the teams?

Usually all the teams would be known before the World Cup draw but this year three positions are yet to be decided for two reasons.

Russia's invasion of Ukraine delayed the European play-off, while the coronavirus pandemic accounts for the other delays.

Two intercontinental finals will be played in Qatar on 13 and 14 June. Costa Rica and New Zealand meet in one and in the other Peru will play the winner of the United Arab Emirates v Australia, who meet in the Asian play-off in Doha on 7 June.

Those games were moved from March because of knock-on effects of the Covid pandemic in each continent. All the Oceania qualifiers were played from 17-30 March in a mini-tournament in Qatar.

Who won't be at the World Cup? 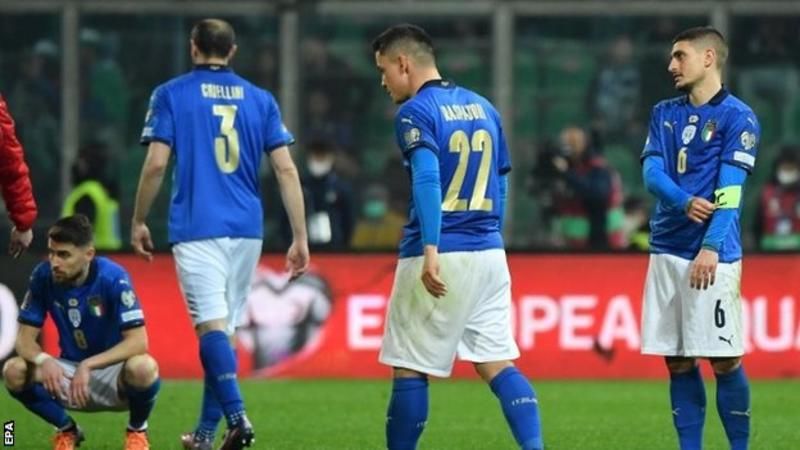 European champions Italy are the most notable absentees after their play-off defeat by North Macedonia, although they did also miss out on the last World Cup.

Russia also miss out after being disqualified from the play-offs following their country's invasion of Ukraine.

Mohamed Salah and Egypt will not be there either after losing to Senegal on penalties.