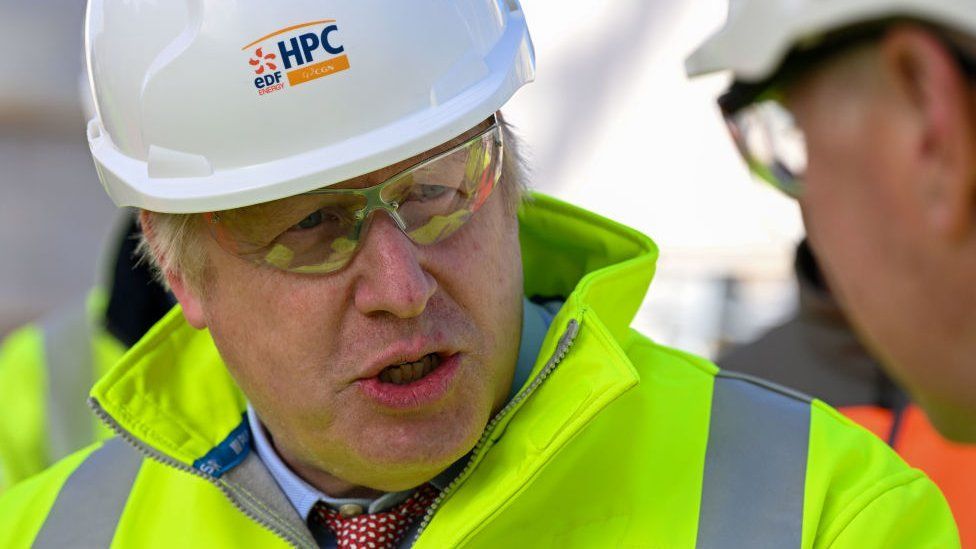 The PM has defended the government's new energy strategy, following criticism it does little to help people struggling with soaring bills.

Boris Johnson said it was a "long-term plan" focused on energy supply and the government had already introduced other policies to tackle rising energy costs.

But Labour said it was "too little, too late" to help with rising costs.

And experts called for a bigger focus on energy efficiency and insulation to help bring bills down.

Consumers are facing huge increases in energy bills after the Russian invasion of Ukraine pushed gas prices even higher.

Speaking at the Hinkley Point C nuclear power plant, Mr Johnson said the strategy was about "tackling the mistakes of the past and making sure that we are set well for the future".

Citing policies including a £6bn energy efficiency fund and support for heat pumps, he said the government was "already doing a huge amount to help people with the immediate cost of living and of course we are going to do more".

Under the government's new plans, up to 95% of the UK's electricity could come from low-carbon sources by 2030.

There is a big focus on offshore wind, with a new target of producing up to 50 gigawatts (GW) of energy from this source by 2030. Officials said this would be more than enough to power every home in the UK.

The strategy says the government wants to "lead the world once again" in nuclear power, reversing what it describes as "decades of underinvestment".

A new body called Great British Nuclear will be launched to bolster the UK's nuclear capacity, with the hope that by 2050 up to 24 GW of electricity will come from that source - 25% of the projected electricity demand.

The government hopes to deliver up to eight new reactors, built on existing sites, with a new reactor approved each year until 2030. 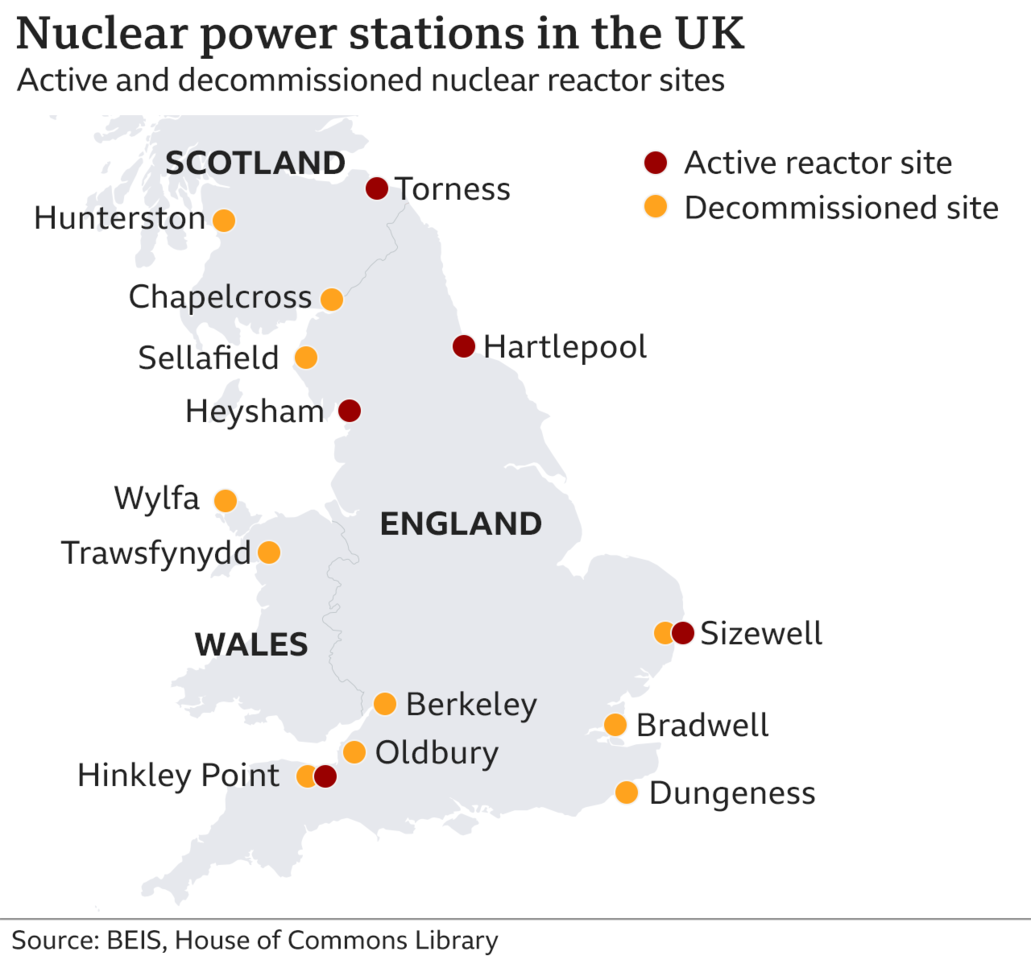 *  Nuclear - The government plans to reduce the UK's reliance on oil and gas by building as many as eight new nuclear reactors, including two at Sizewell in Suffolk. A new body will oversee the delivery of the new plants.

*  Wind - The government aims to reform planning laws to speed up approvals for new offshore wind farms. For onshore wind farms it wants to develop partnerships with "supportive communities" who want to host turbines in exchange for guaranteed cheaper energy bills.

*  Hydrogen - Targets for hydrogen production are being doubled to help provide cleaner energy for industry as well as for power, transport and potentially heating.

*  Solar - The government will consider reforming rules for installing solar panels on homes and commercial buildings to help increase the current solar capacity by up to five times by 2035.

*  Oil and gas - A new licensing round for North Sea projects is being launched in the summer on the basis that producing gas in the UK has a lower carbon footprint than doing so abroad.

*  Heat pumps - There will be a £30m "heat pump investment accelerator competition" to make British heat pumps which reduce demand for gas.

For onshore wind, the strategy commits to consulting on developing partnerships with "a limited number of supportive communities" who want to host wind turbines in exchange for guaranteed lower energy bills.

However, the strategy says there will be no "wholesale changes" to current planning regulations for onshore wind.

Although it is one of the cheapest forms of energy, new onshore wind projects have been declining since 2015 when the government ended subsidies and introduced stricter planning rules in response to some complaints that wind turbines were an eyesore and noisy.

Defending the decision not to prioritise onshore wind, Prime Minister Boris Johnson said the UK already had about 30GW of onshore wind capacity.

He added that new sites "will have a very high bar to clear".

Environmentalists and many energy experts have reacted with disbelief and anger at some of the measures in the strategy.

They cannot believe the government has offered no new policies on saving energy by insulating buildings.

They say energy efficiency would immediately lower bills and emissions, and is the cheapest way to improve energy security.

A Downing Street source said the strategy was now being seen as an energy supply strategy.

Campaigners are also furious that ministers have committed to seeking more oil and gas in the North Sea, even though humans have already found enough fossil fuels to wreck the climate.

There is a strong welcome, though, for the promise of more energy from wind offshore with speedier planning consent.

The same boost has not been offered to onshore wind.

The decision to boost nuclear has drawn a mixed reaction. Some environmentalists say it's too dear and too dangerous. They ridicule the idea from some politicians that every city could have its own mini reactor.

But other climate campaigners believe nuclear must be part of the energy mix.

"All we've got today is a cobbled-together list of things that could and should have been done over the last 10 to 12 years and it doesn't even tackle really important things like insulating homes, which could save £400 on everybody's bill," he said.

The former boss of energy regulator Ofgem, Dermot Nolan, said: "Most of these decisions will take a long time to have an impact and in the short run we will continue to be dependent on fossil fuels."

He said the lack of focus on energy efficiency, insulation and improving the quality of people's homes was "an opportunity missed".

Asked in the Lords why the government was not spending more on improving the insulation of homes, a business minister suggested the Treasury was not willing to support this.

Lord Callanan told peers: "We're spending something like £6.6bn over the term of this Parliament on insulation schemes. It would have been good to go further but the Treasury wouldn't support it."

Green Party co-leader Adrian Ramsay said if the government was "concerned about energy bills and taking real climate action, it would be going even further on onshore wind".

Dr Simon Cran-McGreehin, from the Energy and Climate Intelligence Unit, said the strategy was "underwhelming", describing the lack of funding to improve energy efficiency in homes as "an enormous gaping hole".

He added that there appeared to be "limited ambition" for onshore wind, despite it being "remarkably popular".