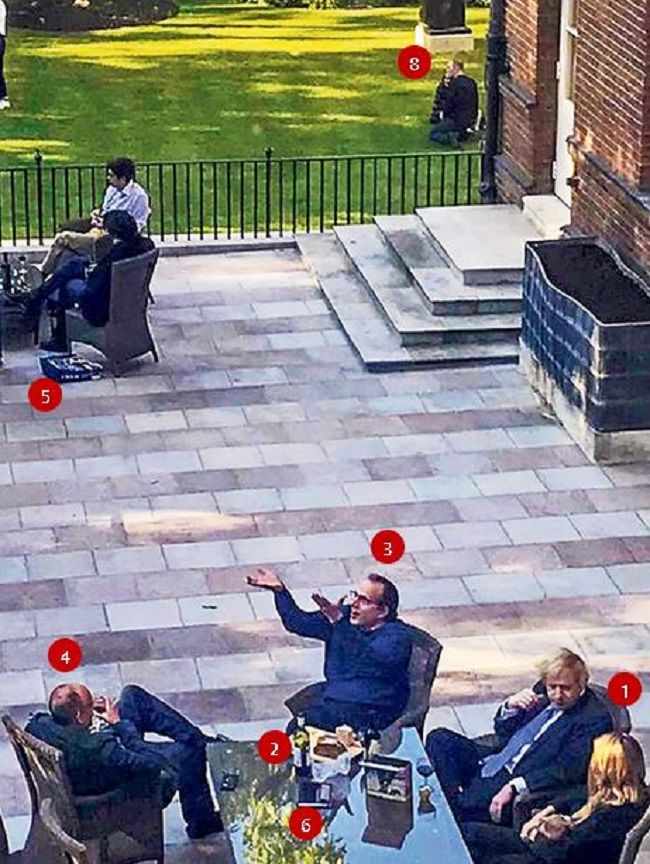 Cheddar or brie, was it really a work meeting, and what was the role of baby Wilfred and Dilyn the dog?

At first glance, the picture published by the Guardian of Downing Street staff spending time together in the garden of No 10 last May seemed to answer one big question: yes, they did gather for cheese and wine.

But since it was published, a series of increasingly complex explanations of the event have emerged: how it constituted a staff meeting but also amounted to “exhausted people … having a drink after the formal business had been done”, or otherwise “individuals having a drink outside working hours, but still discussing work”.

The image has prompted a wave of analysis, intrigue, anger and of course memes. Days on, a close analysis of the picture itself, however, throws up a number of further mysteries that are yet to be resolved …

1 How do you endure 17 of your husband’s staff colonising your garden for an important work meeting?

Carrie Symonds (now Johnson) was said to be enjoying time in her private garden and seems to have taken the most sensible approach: ignore the staff and talk to your husband. Baby Wilfred does not seem that fussed. He may be engaged in his own work projects.

2 What is the correct wine and cheese pairing for an important garden-based work meeting attended by a baby?

The photo was taken in the early evening of 15 May 2020, the temperature a balmy 18C. If you must drink red wine in such weather while you work, as this group appears to be, go for “something light and chillable – like a Fleurie from Beaujolais in France,” suggests the master sommelier Ronan ​​Sayburn, founder of the Ronan Sayburn wine academy. That would go well with camembert or brie, he adds. Sadly, not even the Guardian’s crack imaging team can provide a high enough resolution picture to identify exactly what is on the cheeseboard, but the large, hard oblong that is visible looks suspiciously like … cheddar.

3 What is the man who appears to be the prime minister’s principal private secretary doing with his arms?

Since this is a work event, the attender identified as the senior civil servant Martin Reynolds is perhaps pondering next steps while emphasising that the total number of coronavirus cases as of that evening – 236,711 – is this high. Since it is a work event, we can rule out that Reynolds is gesturing vaguely towards the setting sun to indicate what a lovely evening it is to unwind with a nice glass of red wine and some hard cheddar.

4 What is the man who appears to be Dominic Cummings thinking?

This figure, almost horizontal despite the support of a sturdy rattan chair, is obviously turning Reynolds’ point over in his steel-trap mind, readying himself to cut through all the nonsense with a revolutionary counterproposal, and certainly not zoning out while his counterpart bangs on about what a lovely spring it is. He also needs some new trousers, further supporting the case that this is Cummings.

5 Is the venerable bookseller Daunt braced for a backlash as a result of the unfortunate appearance of one of their beloved tote bags?

“I’m gonna double check with my elders and betters, but that’s probably going to be a no comment from us,” says a nice man who answers the phone at Daunt HQ, remaining admirably composed under the same sort of media pressure faced by the Peloton PR team over that Sex and the City controversy. He calls back to add: “Yeah, it’s broadly no comment, except to say we won’t be putting it on our website.”

6 What is the minimum number of work accessories required for a productive meeting?

This image suggests an estimate of: one smartphone on a table, face down; one notebook on a table, closed; one phone actively in use, in a huddle on the other side of the garden; 19, or 20 if you include Wilfred, or 21 if you include Dilyn the dog, of the best minds in Westminster operating at peak capacity with no pens to take notes or whiteboards to scrawl terrifying bullet points on. This is pandemic management at its very rawest and most thrilling: Downing Street unplugged.

7 Is having absolutely no fun sufficient to qualify a meeting as a work event?

If so, this group are the best evidence for the essential nature of this gathering. Based on the admittedly limited clues available, we can surmise that the three on the left are smiling and nodding awkwardly as one of the two in the middle tells an interminable story about his commute; the man standing slightly apart in the middle has abandoned all pretence of good manners to check the Guardian liveblog on his phone; and the two men in blue shirts on the right are being forced to break off an enjoyable session muttering about how much they dislike their colleagues by the presence of the awkward figure in the dark suit, clearly a superior, maybe even a minister, trying once again to be part of the gang. Nobody could begrudge this lot the several bottles on their table, or feel anything but relief on their part that at least one of them appears to be in a cooler.

8 What are these two up to?

Easily the most mysterious corner of the image. Are they plotting, or flirting? If plotting, does that constitute a work conversation? If those adorable flashes of white – rear to the right, snout to the left – are indeed Dilyn the dog alongside James Slack, the PM’s then official spokesperson, how long until he (Dilyn) notices the cheese on the patio and makes a run for it? And is anyone making a mental note that this would make a really good venue for an aide’s excruciating press conference in 10 days’ time explaining his need to take his eyes for a test drive?