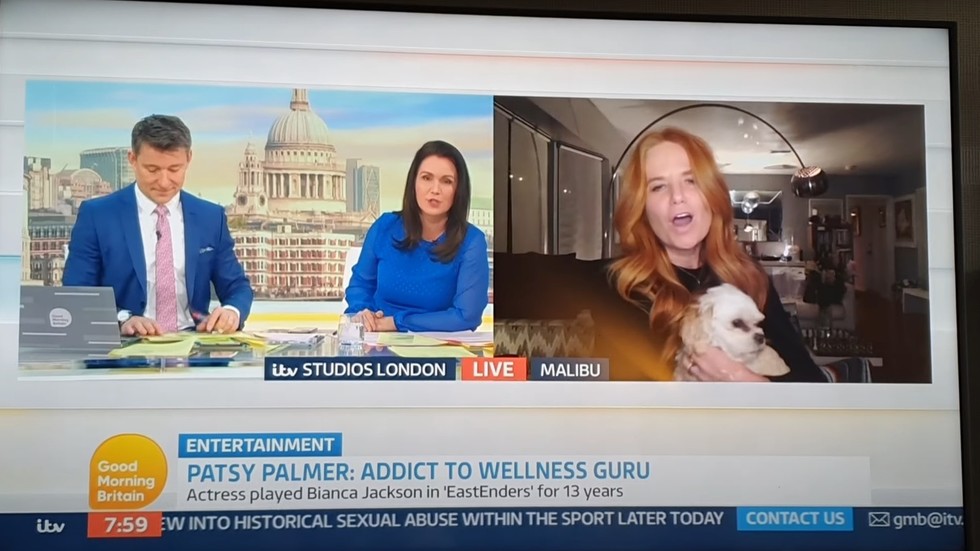 Hosts of ‘Good Morning Britain’ were left red-faced after their interview with Patsy Palmer was cut off by the guest, who was unhappy about a program caption bringing up her old addiction problems.

Palmer, best known for portraying Bianca Jackson in the BBC’s long-running series ‘EastEnders’ was supposed to discuss with Ben Shepard and Susanna Reid, the hosts of Good Morning Britain (GMB), her new wellness brand, Good and Proper. The interview, which she did from her Malibu home, went quickly down the drain, after she noticed the description of herself floated in the lower third of the screen.

As she was being introduced, Palmer apparently made an ‘Oh’ with her lips and leaned closer to her laptop screen, presumably to read how the program presented her. As her turn to speak came, she declared she did not want to continue.

“I’m going to switch off, do a real Piers Morgan and just say it's not ok to have ‘addict to wellness guru’ on the bottom of the screen,” she said. “You know, my issues I had years ago that were talked about by me many many years ago and it's over.”

As Shepard and Reid were saying they were sorry about upsetting Palmer and that it was never their intention, she closed her laptop. The actress addressed her past problems with substance abuse in an autobiography released in 2007, among other media.

Her remark about doing a Piers Morgan refers to the former star host of GMB, who infamously rushed off the set after being lectured by a co-host about his criticisms of Meghan Markle, Duchess of Sussex. The last episode of the program, which he hosted on Tuesday last week, brought GMB its largest-ever viewership, of almost 1.3 million, and put it ahead of competitor ‘BBC Breakfast.’ The scandal-boosted ratings have since plunged, with 895,700 viewers reported on Monday, the first day when Shephard took over Morgan’s seat alongside Reid.

The virtual walkout from the interview split social media, with some commenters hailing Palmer’s move and others suspecting her of throwing a publicity stunt.