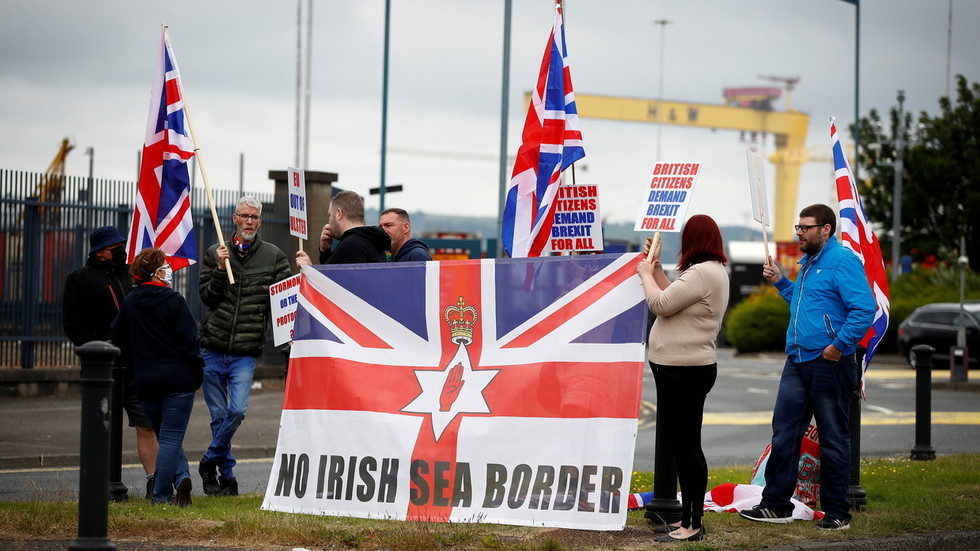 Northern Ireland’s largest pro-British party has threatened to bring down the Stormont government unless there are big changes to the post-Brexit protocol which imposes trade barriers between the province and Britain.
On Thursday, Democratic Unionist Party (DUP) Leader Jeffrey Donaldson demanded changes to the Withdrawal Agreement, which sees the British province on Ireland cut off from the mainland by trade barriers. In his speech, Donaldson said that the DUP could leave the power-sharing arrangement with Irish nationalist party Sinn Fein unless its demands are met.

“Within weeks it will be clear if there is the basis for the (Northern Ireland) Assembly and Executive to continue in this current mandate or whether there is a need for an Assembly election to refresh our mandate,” he stated.

The DUP leader claimed that if the choice existed between staying in office and implementing the protocol in its present form, the only option would be to leave office.

Donaldson’s speech comes amid a two-day visit to Belfast by European Commission Vice-President Maros Sefcovic, with many hoping the EU will loosen its impositions on trade.

The unionist chief said he would seek to block any additional measures which see customs checks carried out to police EU trade restrictions with the rest of the UK, and vowed to immediately halt cooperation with the government of the Republic of Ireland, apart from in the area of health.

Donaldson took over the leadership of the DUP in June and has adopted a firm line on the post-Brexit arrangement. London has also demanded changes to the deal, claiming it’s not working for the province.

Britain’s divorce deal with the EU has seen Northern Ireland cut off from the rest of the UK, separated by a customs border down the Irish Sea, a measure which was adopted to prevent a hard border on the island of Ireland.

While the deal was completed on December 31, it remains a contentious issue, with Brussels unwilling to make concessions which could compromise its precious single market.

Earlier this year, unrest turned to violence in Northern Ireland as people vented their frustrations at the territory’s post-Brexit arrangement. Dozens of law-enforcement officers were injured policing the riots, the worst seen in the province in decades.
Add Comment