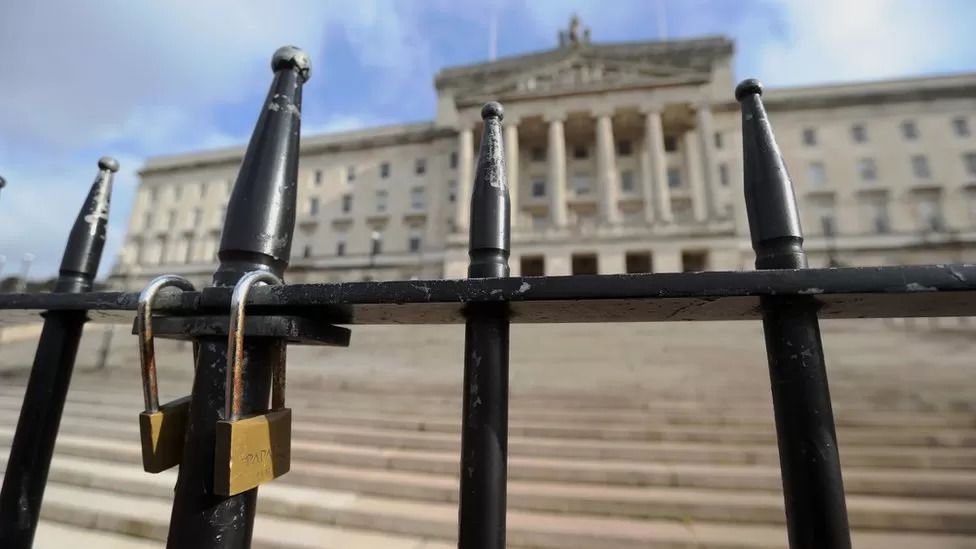 Northern Ireland's politicians have failed in last-ditch efforts to restore devolved government ahead of a legal deadline to call an assembly election.

The parties met on Thursday but failed to elect a Speaker, or the first and deputy first ministers.

The NI secretary is set to call a poll if no executive is in place by Friday.

The Democratic Unionist Party (DUP) is blocking the restoration of power-sharing in its protest against post-Brexit trading arrangements.

It keeps Northern Ireland aligned with some EU trade rules to ensure goods can move freely across the Irish land border.

Assembly members met at Stormont as Sinn Féin, which won the largest number of seats in the last assembly election in May, called for the DUP to end its protest.

The DUP has refused to nominate ministers to the executive and denounced the assembly meeting as a "flawed and failed attempt" to restore power-sharing.

The prime minister has urged the DUP to return to Stormont, with an official spokesman saying "the people of Northern Ireland deserve a fully functioning and locally elected executive which can respond to the issues facing the communities there". 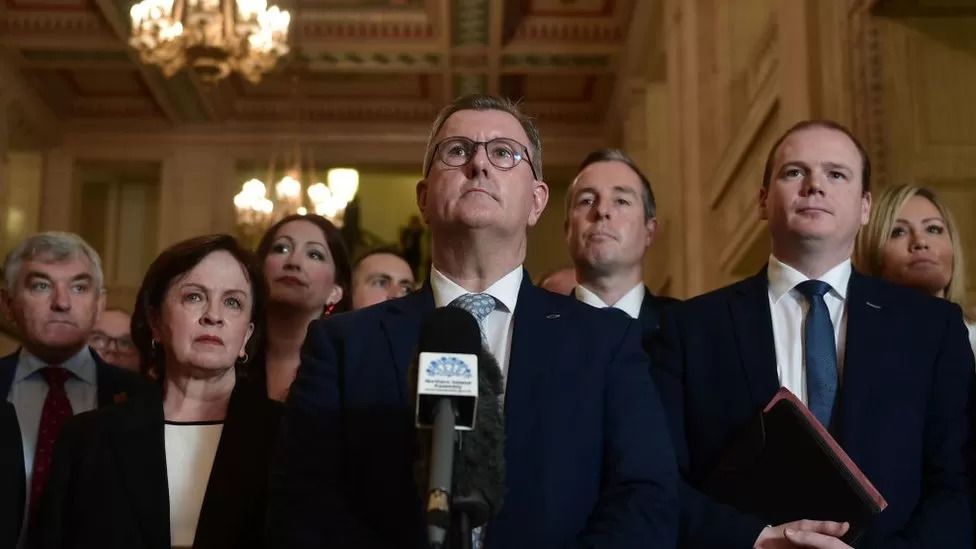 The executive is made up of ministers from the largest parties, and is designed to ensure unionists and nationalists govern together.

Before a heated debate at Stormont on Thursday, Speaker Alex Maskey said: "If the assembly is unable to elect a speaker and deputy speakers, it cannot proceed to do any of the other business, including the appointment of ministers."

The election of a new Speaker is required before an executive can be appointed but attempts to elect the Social Democratic and Labour Party's (SDLP) Patsy McGlone and Ulster Unionist Party's (UUP) Mike Nesbitt both failed.

It is the fourth time the assembly has met and failed to elect a Speaker since May's election.

Sinn Féin vice-president Michelle O'Neill, who is entitled to the first minister position after her party won the most seats in May's election, accused DUP leader Sir Jeffrey Donaldson of a "failure of leadership".

She said that if power-sharing could not be restored, there should be a "joint approach" between London and Dublin.

The Northern Ireland Office has ruled this out and said "joint authority is not being considered". 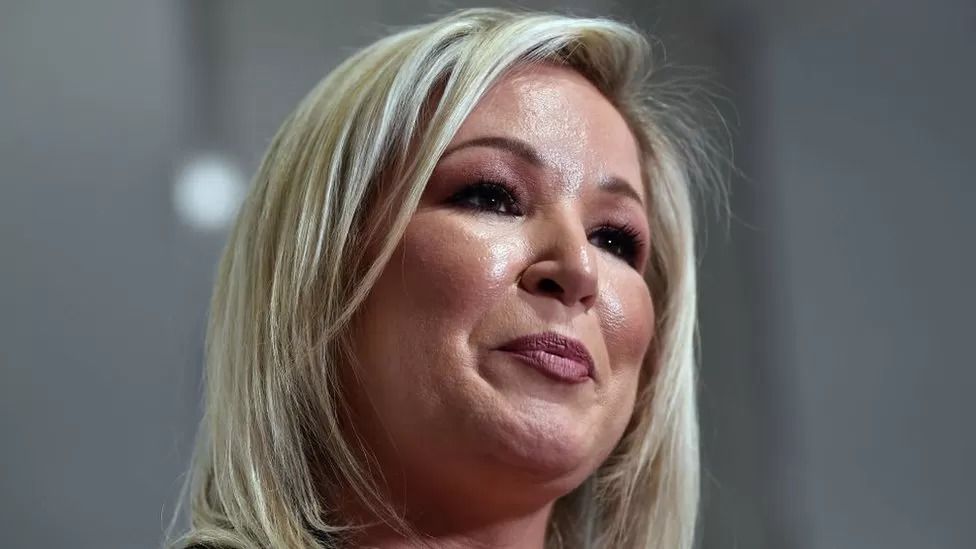 There is no indication the deadlock will be broken before Friday's 00:01 BST deadline - 24 weeks since the assembly first met following May's election.

If the deadline is missed, Northern Ireland Secretary Chris Heaton-Harris must call for an assembly election to be held within 12 weeks. The most likely date for a poll is 15 December.

Ministers have been in post, but with only limited powers, since the DUP withdrew from the executive in February.

This is because the DUP, which is the largest unionist party at Stormont, has also blocked the election of an assembly Speaker as part of its anti-protocol protests.

What happens if midnight's deadline is missed?

If political deadlock cannot be broken before 00:01 on Friday, Northern Ireland's secretary of state must call an election "as soon as is practicable" - to be held within 12 weeks.

Chris Heaton-Harris, who has been in office since 6 September, has consistently said he will call one, rather than try to delay it or avoid it with fresh legislation at Westminster.

So, as of midnight, Stormont's caretaker ministers will be removed from office and senior civil servants will be in charge.

The assembly - which has been meeting only for special recalls since May's election - would also be dissolved.

A pre-Christmas election would partly fill the void, but there is a risk it could make things worse rather than better.

Positions could harden during campaigning and, if there was a very low turnout, the validity of the result could be questioned.

As the DUP has said it will continue its protest against the NI Protocol, the election is unlikely in itself to break the stalemate.

So Northern Ireland could be set for further cycles of negotiations, up to 24 weeks, and future elections, until a resolution is found or the law is changed.

Alliance Party leader Naomi Long, who leaves her position as justice minister, said she was "ashamed to be part of this circus yet again".

"We know that elections in Northern Ireland do not solve problems, they deepen the crisis," she added.

Matthew O'Toole, of the SDLP, said the assembly session was "depressing and shameful" and "felt like a wake for power-sharing".

UUP leader Doug Beattie said the assembly recall was "farcical" and protocol issues needed to be sorted out to restore the executive.

His party colleague Robin Swann, the outgoing health minister, said he was disgusted, frustrated and angry at the political impasse.

"I'm angry that politics has actually got in the way of making the progress that our patients require," he continued.

In May's assembly election, Sinn Féin became the first nationalist party to win the most number of seats at Stormont. The DUP came second, with Alliance party returning with the third largest number of seats.

The result cemented a majority for assembly members who accept the protocol.

Sinn Féin, the Alliance Party and the SDLP are all in favour of the protocol remaining, although they accept some changes need made to the way it operates.

Unionist parties - the DUP, the UUP and Traditional Unionist Voice (TUV) - say the protocol undermines Northern Ireland's place in the UK and is contrary to the spirit of the 1998 Good Friday Agreement, the peace deal which set up the power sharing arrangements in Northern Ireland. 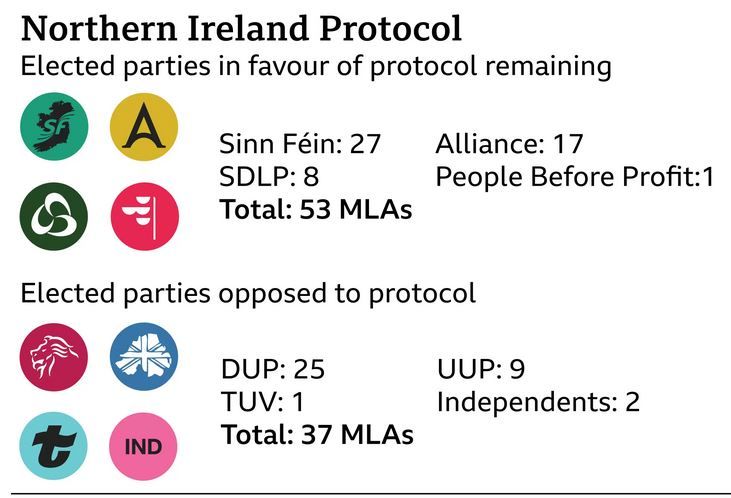 Recent research conducted by Queen's University suggests the majority (65%) of those polled in Northern Ireland wanted an executive to be formed regardless of what happened on the protocol.

The LucidTalk poll was based on weighted sample of 1,499 responses from 7-10 October, with a margin of error of 2.3%.

Foreign Secretary James Cleverly and European Commission's Maros Sefcovic held a call on Thursday about EU-UK talks on the protocol.

The EU accepts it causes difficulties for many businesses, and technical-level talks on how to fix problems are expected to continue even in the event of fresh elections.

That's a change from earlier in the year, when negotiations were paused ahead of May's assembly poll.

People close to the current talks say the mood is better between the two sides than it was back then.

However, there are also warnings that it's entirely possible, because of remaining differences between Brussels and London, that discussions could eventually run out of road.