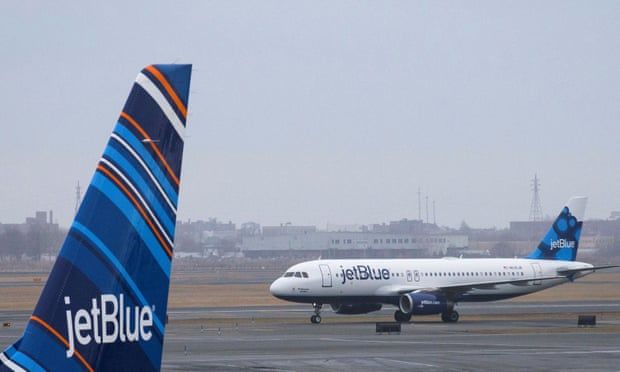 Drunk pilot removed from cockpit of JetBlue flight to Florida

The pilot reportedly downed seven to eight drinks before boarding the plane
A JetBlue pilot was removed from the cockpit of a flight and taken into custody in the US after having a blood-alcohol level more than four times the federal limit for pilots.

The pilot, a 52-year-old man from Orlando, Florida, was first removed from the cockpit after a Transportation Security Administration agent told authorities Clifton looked “impaired” while passing through security, reported the Buffalo News.

The pilot had told authorities that he had seven to eight drinks before he got on the plane that was departing from Buffalo Niagara international airport to Fort Lauderdale, said a Niagara Frontier TSA spokeswoman, Helen Tederous.

After he was removed, police performed a breathalyzer test and found that his blood-alcohol level was 0.17%. The Federal Aviation Administration prohibits pilots from drinking within eight hours of a flight or flying with a blood-alcohol level more than 0.04.

The pilot told police he needed to get his gun from the cockpit while being detained, according to reports. Pilots can carry firearms on planes if certified, but it was not immediately clear if he had the appropriate permits.

He was initially taken into police custody, and was later released to JetBlue security. The pilot, who has since been removed from his duties by JetBlue, may face federal charges, said Tederous.

In a statement, JetBlue officials said they were aware of the incident and cooperating with law enforcement. JetBlue also said they were conducting an internal investigation.

“We adhere to all [Department of Transportation] rules and requirements concerning alcohol at all times and have a very strict zero-tolerance internal alcohol policy,” read the statement.
Add Comment