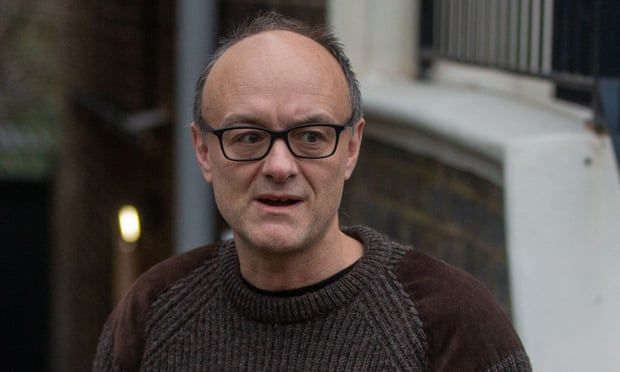 The prime minister’s former chief adviser called his former boss a “complete fuckwit” whose only preoccupations were “Big Ben’s bongs” and “looking at maps” to “order the building of things” in his honour.

Cummings, who has sent evidence to the Cabinet Office inquiry led by Sue Gray, said it was imperative Johnson was removed from office. Speaking to New York magazine, he called it “an unpleasant but necessary job” and said it was legitimate to remove a prime minister who had won a big election victory if they were not up to the job.

Johnson is expected to be handed a heavily redacted version of the Sue Gray report into alleged breaches of lockdown rules in Downing Street early next week, as allies briefed over the weekend that an operation to save him from a vote of no confidence was winning round MPs.

The prime minister is expected to travel to Ukraine on Tuesday and release the long-awaited levelling up white paper on Wednesday as a show of purpose to his restive MPs.

The foreign secretary, Liz Truss, one of those in contention to replace Johnson should he be forced out, said on Sunday Johnson was “absolutely” the best person to lead the Conservative party into the next general election.

Johnson’s chief of staff, Dan Rosenfield, was in the spotlight on Sunday as the Sunday Telegraph revealed he had been at the first day of the England v India Test at Lord’s on 12 August, three days before Taliban forces entered the Afghan capital.

Rosenfield, along with the cabinet secretary, Simon Case, and Johnson’s principal private secretary, Martin Reynolds, is among those expected to be criticised in the redacted version of Gray’s report – which the Metropolitan police have asked to be stripped of details of the most egregious alleged rule-breaking while a police investigation is carried out.

Johnson has told angry MPs he will oversee a full clearout of the No 10 operation, which the Guardian understands could include a number of close allies of his wife, Carrie Johnson, who have had a power base in No 10 since the departure of Cummings and his associates.

Cummings revealed one of the most damaging No 10 lockdown gatherings on his Substack, where Reynolds had emailed staff inviting them to drinks in the garden and to “bring your own booze”. Cummings has said Johnson was warned about the gathering, which the prime minister has admitted to attending but claims to have thought it was a work event.

The former adviser told New York magazine Johnson was driven entirely by what would be in the papers the next day. “In January 2020 I was sitting in No 10 with Boris and the complete fuckwit is just babbling on about: ‘Will Big Ben bong for Brexit on 31 January?’” he said.

Asked if it was fair that he was mounting a campaign to remove his former boss, Cummings said: “What’s fairness got to do with anything? It’s politics. All this is not fair. The fact that someone wins an election doesn’t mean that they should just stay there for years, right? If you’ve got a duffer, if you think someone can’t do the job, or is unfit for the job.

“You know, as he said to me: ‘I’m the fucking king around here and I’m going to do what I want.’ That’s not OK. He’s not the king. He can’t do what he wants. Once you realise someone is operating like that then your duty is to get rid of them, not to just prop them up.”

Cummings also told the magazine Johnson acted as if considering “what would a Roman emperor do? So, the only thing he was really interested in – genuinely excited about – was, like, looking at maps. Where could he order the building of things?”