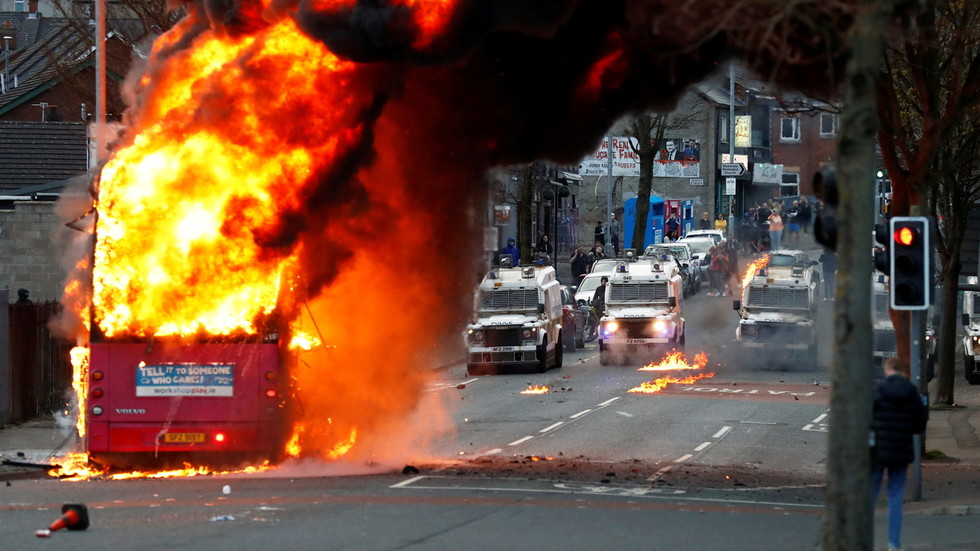 The sixth consecutive night of violence in Northern Ireland, in which a bus was hijacked and burnt to the ground, has been condemned by the UK government's Northern Ireland Secretary ahead of his visit to Belfast on Thursday.
"All communities in Northern Ireland must work together to resolve the tensions that we are currently facing," Brandon Lewis said in a statement.

"The right way to express concerns or frustrations is through dialogue, engagement, and the democratic process, not through violence or disorder."

Lewis announced that he will fly into Belfast to meet with community, faith and political leaders, and also welcomed a joint statement from Northern Ireland's ruling coalition condemning the violence.

"We are gravely concerned by the scenes we have all witnessed on our streets over the last week, including those at the Lanark Way interface last night," the Executive's statement read.

The statement from the Executive, which comprises politicians from opposing unionist and republican parties, acknowledged its internal political differences, but said it was "united" in its support for the police and rule of law.

On Wednesday, protesters rioted in and around Lanark Way and the Shankill Road in Belfast, where a double-decker bus was hijacked and set ablaze under a flurry of Molotov cocktails.

Police were also pelted with stones, with 55 officers injured across the six nights of violence. Boys as young as 13 have been arrested on rioting charges during the unrest.

Unionists have been angered by prosecutors' decision not to take action against 24 politicians from the nationalist Sinn Fein party, who were among 2,000 people to attend the funeral of a former Provisional IRA fighter in June, in breach of Covid-19 measures.

Added to this anger has been the tension caused by the UK government's Brexit deal with the EU, which has effectively seen a customs border placed down the Irish Sea, between Northern Ireland and the rest of the UK.

The arrangement is part of the Northern Ireland Protocol, which is designed to avoid a hard border between Northern Ireland and the Republic of Ireland – still an EU member state – as well as to sustain the Good Friday peace agreement that ended decades of violence in the region.
#COVID-19  #Covid
Add Comment