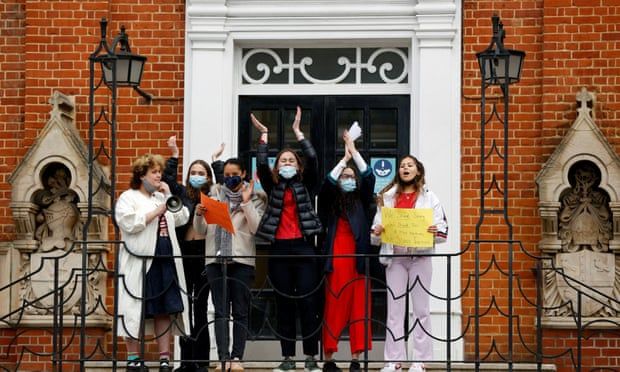 DfE warns schools could be closed over 'rape culture' claims

More than 100 schools have been named in harrowing anonymous testimonies on the everyonesinvited.uk website, which was set up to expose misogyny, harassment and assault and has also drawn attention to a lack of redress and support for many victims.

Scotland Yard is reviewing the testimonies on the site to establish whether any potential victims in London could be encouraged to report crimes, while a source at the Department for Education (DfE) said on Sunday that schools would be urgently investigated and face tough sanctions if they fail to address concerns.

“Where schools do not meet the strict safeguarding standards that we have in place, we will always take action,” the DfE source said. “If it becomes clear that there are current failings in any school’s safeguarding practice, we will immediately ask Ofsted or the Independent Schools Inspectorate to conduct an inspection. If a school is found to not be meeting the required safeguarding standard, we will make sure it either improves or closes.”

They said statutory guidance for schools was regularly updated so that teachers and other school staff understand their safeguarding duties, including how to raise concerns. The government recently consulted on proposed changes to the statutory guidance and revisions to advice on sexual violence and sexual harassment between children in schools and colleges. The revised guidance is expected to come into force in September.

By Sunday evening, more than 7,000 anonymous testimonies had been posted on the Everyone’s Invited website.

Simon Bailey, the national police lead for child protection, said he expected forces across the country to be involved in investigating the claims, which he compared to the #MeToo scandal. “If somebody has been privy to rape or serious sexual assault, then we want to hear from them,” he told the Times, adding that he thought it was likely there would be cases where “abuse will have been covered up to protect reputations”.

Last week, several high-profile fee-paying schools, including Dulwich college, Latymer upper school and Westminster school, were named in testimonies and faced accusations of a failure to address “rape culture”. But there were warnings over the weekend that the problem should not be viewed as one only affecting private schools, with state schools also culpable.

A report by a commission led by the former home secretary Sajid Javid, published on Sunday, warned of a UK epidemic of child sex abuse. Among its recommendations were that staff at all schools should be trained to spot signs of abuse and that school nurse staffing numbers should be restored to their pre-2010 levels to enhance identification of abused children. In 2019, the Royal College of Nursing said there had been a 30% reduction in school nurses since 2010.

The report, for the Centre for Social Justice, also said the DfE should produce best practice resources for schools on delivering relationships and sex education as well as guidance for primary school teachers on how to handle questions related to sex that go beyond the relationships education curriculum.

Javid said: “We’re facing an epidemic of child sexual abuse in this country … We must act now if we want to protect our kids against these abhorrent crimes.”

A government spokesperson said: “We are very concerned by the significant number of allegations recently posted on the Everyone’s Invited website. The abuse of children and young people in all its forms is abhorrent.

“The vast majority of schools, colleges and universities take their safeguarding responsibilities very seriously, so it is particularly shocking when allegations of abuse are made in connection with a place of education where everyone should feel secure and be protected.

“Working together, the Department for Education, the Home Office and the National Police Chiefs’ Council are in contact with Everyone’s Invited to provide support, protection and advice to those who are reporting abuse, including on contacting professionals or the police if they wish.”

Latymer Upper School said it took allegations “very seriously” and had reported the allegations to the local authority and police, and promised an independent review. The head of Dulwich College, Dr Joe Spence, described the alleged behaviour as “distressing and entirely unacceptable”, adding that he “condemned unreservedly the alleged social and sexual misconduct”.
Add Comment