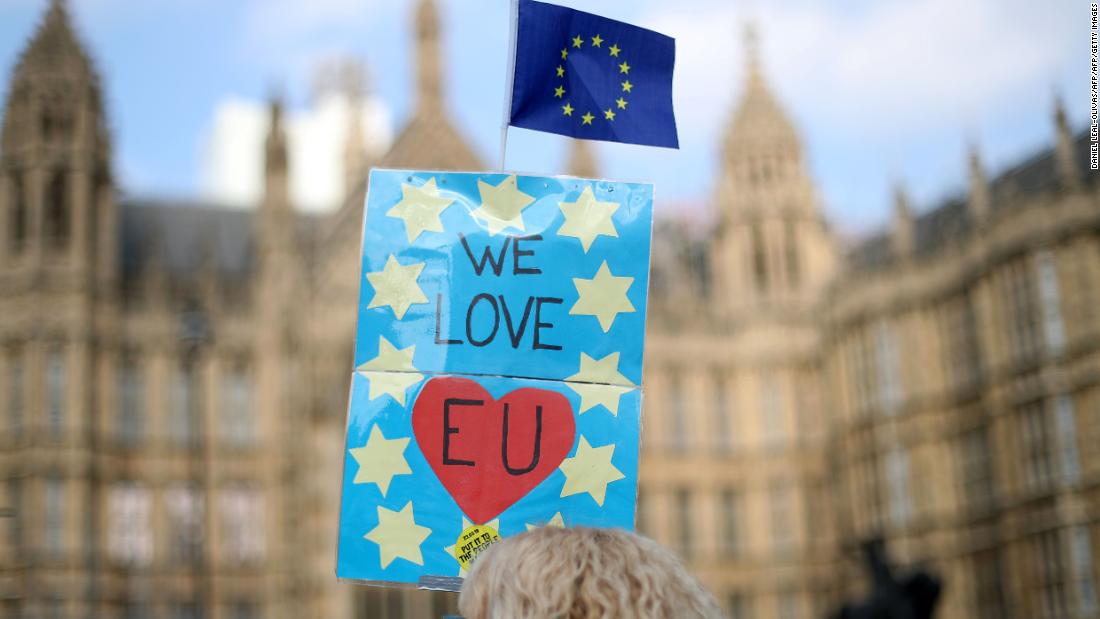 The UK now has nearly three months of post-Brexit life under its belt. So, how has it celebrated this newfound freedom from its Brussels-based masters?

Despite Boris Johnson's government taking to its new role as Europe's rowdy neighbor like a duck to water, claiming victory in the vaccine race as a consequence of Brexit and threatening to breach treaties it signed with Brussels, Britons are in no rush to transform their national identity.

For all that prominent Brexiteers talked up the idea of London becoming "Singapore-on-Thames" -- a low-tax financial hub that could de-regulate its way to stealing businesses from Europe -- and a giant in global trade, the UK's socio-economic and political systems will probably remain very European for quite some time to come.

This may seem odd, given the monumental decision Brits took in 2016, backing a campaign to leave the EU led by people like Nigel Farage and Boris Johnson -- free-market capitalists and ardent Euroskeptics.

Yet while Brits did vote by a majority of 1.3 million to leave the EU, what isn't clear is whether they really wanted to be less European.

"There are essentially two dimensions to British politics: The left-right divide on economics and [the] liberal-conservative divide on social issues," says Chris Curtis, a pollster at Opinium Research. He explains that among the political classes, these tend to correlate as social conservatives supporting right-wing economics.

It's much less clear among the general public though.

"Lots of people voted 'Leave' because they wanted the UK to have more control and they opposed immigration, but they do not support the idea of shrinking the state, deregulating, and lowering standards," Curtis adds. "Many of the leaders of the Brexit movement saw the future of the country differently."

Britain as a European nation has always been a bit of a paradox.

On one hand, the public doesn't think of itself as particularly European. On the other, it supports policies which are.

A recent report by the British Foreign Policy Group (BFPG) showed that Brits feel culturally closer to nations in the Anglosphere than in Europe. This research found that 19% of Brits thought the UK's "best friend" was the US and 15% thought it was the Commonwealth, compared to Germany and France, both of which trailed with 2%.

"Even though our society and our instincts towards the state have become increasingly European during our membership of the EU, Brits have never felt the same affinity with EU nations such as France and Germany that they do with their cousins in the Anglosphere," says Sophia Gaston, BFPG's managing director.

However, when it comes to domestic policy, Brits consistently appear to have more in common with their European neighbors.

"Most Brits wouldn't call themselves a European, but the ways we want our government, state and economy to be arranged [are] inherently European," says Anthony Wells, director of political research at YouGov UK. 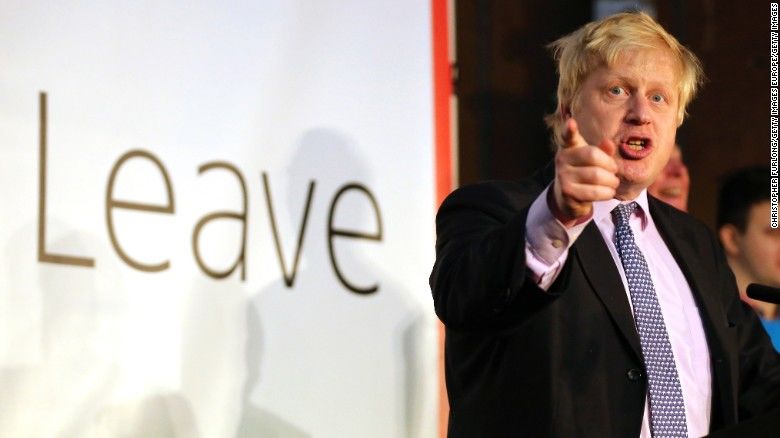 Boris Johnson addresses supporters during a rally for the 'Vote Leave' campaign on April 15, 2016 in Manchester, England.

YouGov's polling consistently confirms this. The top rate of income tax in the US is 37% for income over $518,400. Compare this to the UK, where the top rate is 45% on earnings over £150,000 ($207,000). Despite this, according to YouGov, 44% of adults polled think the tax system is fair, compared to 14% who say it's unfair. In addition, most Brits polled said they would be perfectly happy with a tax rise in order to pay for certain social services provided by the government. Some 68% of Brits polled said they would be happy to pay more tax (with some caveats) -- compared to 9% who wouldn't -- for state-funded care of the elderly, for example.

This hardly paints a picture of a nation ready to take free-market capitalism to the next level, shrinking its state, cutting taxes and lowering standards in order to compete with Europe. It also raises some policy questions about what Brexit was actually for.

The other perceived bonus of leaving the EU was the freedom to strike trade deals. But, once again, the differing standards of non-European nations create a roadblock for the government.

"People like protections, particularly when it comes to food, the environment and animal welfare," says Curtis. "Lowering standards in any of these areas will make comprehensive trade deals beyond Europe very difficult."

The most obvious example of this is the debate around the UK signing a hypothetical trade deal with the US, Britain's largest single trading partner.

The prospect of a US-UK deal provided many Euroskeptics with justification for leaving the EU throughout the protracted Brexit process.

But the US has all sorts of standards that are thoroughly undesirable to the majority of people in the UK. These range from food and animal welfare to workers' rights and healthcare. Since Britain is by far the smaller partner, it is likely that even under President Joe Biden, the US would make demands in any trade deal that would be unacceptable to most Brits. 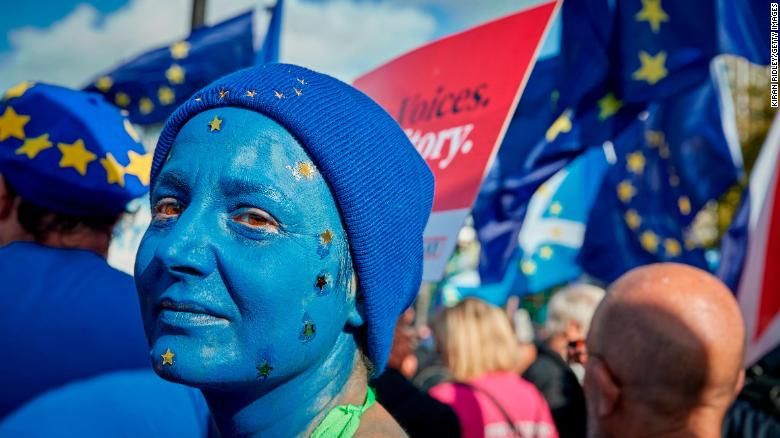 Michela Beltracchi, an Italian who has lived in the UK for over 10 years, protests as part of the People's Vote Rally on October 19, 2019 in London, England.

This was famously used by the opposition Labour party during the UK's 2019 general election, during which they claimed (with scant evidence) that Prime
Minister Johnson wanted to do a trade deal that would "slash food standards," leading to chlorinated chicken in supermarkets and "'acceptable levels' of rat hair in paprika and maggots in orange juice."

However, the main reason a trade deal with America is so toxic in the UK is because of the demands the US would make on medicine procurement. US drug companies have long believed that other countries unfairly subsidize the development of medicines. So any deal with the UK would almost certainly contain a clause allowing US firms to challenge any procurement contract signed by the UK with any drug company. That would mean the near-certainty of drug prices going up in the UK because of American private drug companies.

"Putting the words 'private sector' in the same sentence as the words 'National Health Service' is one of the very few things that could make you completely unelectable in the UK," says Curtis.

The free-at-the-point-of-use NHS is a huge source of pride in the UK, and the nation's love for it has been central to the government's Covid-19 pandemic messaging.

The final area in which the UK is likely to remain European is in foreign policy.

"Despite the perception of Boris Johnson being some kind of mini-Trump, he actually sided with his European allies on most international issues when
Trump was in office," says Anand Menon, professor of international politics at King's College London.

"He has backed his European allies on Syria, Iran, Russia and will put climate change at the top of his agenda for his chairmanship of the G7. On substantive issues such as these, Johnson is pretty much aligned with European states and the US under Biden." 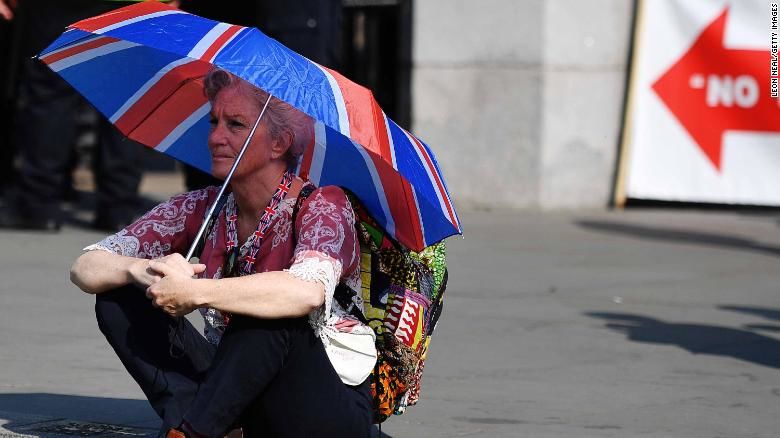 Britain cannot physically cut itself off from Europe, and it seems that stubborn reality still dominates how citizens actually want their country to be run, despite Brexit. Gaston explains that 53% of Brits favor the European Union as a global partner, compared to the US at 27%.

"One outcome of the Brexit debate has been that the supreme force of geography is now well understood," she says. "To me, this signals space for the emergence of a more pragmatic, less emotive, debate in the future about the UK-EU security and foreign policy partnership."

What does this all mean for the post-Brexit project? Given Johnson's obsession with public opinion, it likely means that many of Britain's low-tax, free-market loving Brexiteers may have to wait a very long time before realizing their dreams of Singapore-on-Thames.

That must be a punch in the gut for the people who threw their support behind Johnson in 2016, and then helped him realize his long-held dreams of finally becoming Prime Minister three years later.