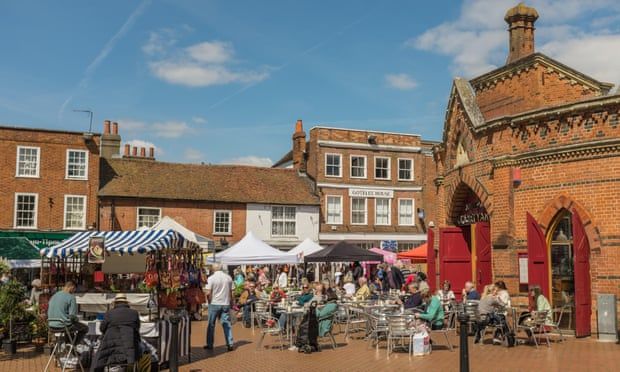 Demand for crisis support soars even in wealthy UK towns

Citizens Advice in affluent Wokingham says requests for help have nearly doubled in a year
A growing number of people in one of the most affluent areas of the country are struggling financially because of a huge spike in energy bills and the soaring cost of living, according to the chief executive of Wokingham Citizens Advice.

Many people who have been “just about managing” are now slipping into poverty and debt in Berkshire, said Jake Morrison, making him fearful for poorer regions throughout the country.

“Wokingham is one of the least deprived areas in England. It just is,” he said. “In normal times we might refer a handful of people to the food bank a week – now we are doing that in half a day.”

Morrison, who wrote on Facebook about the steep rise in demand for the service, noted that while in August 2021 his branch of the charity helped 643 people, this August they have already helped 956 people – a 48% increase.

Morgan Wild, the head of policy at Citizens Advice, said the charity was helping two people every minute with crisis support, with numbers continuing to head “in the wrong direction”.

“On a daily basis, our advisers are raising red flags about the situations people are facing: people who are terminally ill and unable to heat their homes; parents going days without food to feed their kids; and people unable to afford the bus fare to get to a food or school uniform bank.

“We need government support that matches the scale of this crisis. That means a financial lifeline for those who need it and better protections when people can’t afford their bills.”

An increase in the number of people from normally affluent areas could affect the stance of the future Conservative leader, with MPs already concerned that the party has not been sufficiently active on the issue.

Of the people contacting the Citizens Advice in Wokingham, 55.8% said they had reached out for help as a result of increased bills and the cost of living.

Morrison urged people to reach out for help even if they had never needed help previously, but said he worried that staff would be unable to answer calls as quickly if demand continued to grow exponentially. “As that demand increases, those people who are feeling validated by just being heard, might not even get that because the demand is going to be too high for us to have those conversations,” he said.

Charities were also having to contend with a crisis on the back of a crisis, he added – with many having already depleted rainy-day funds during the pandemic. “The money that was tucked away by charities and fundraisers to give away, it’s gone,” he said. “And that’s what’s really scary.”
#Facebook
Add Comment