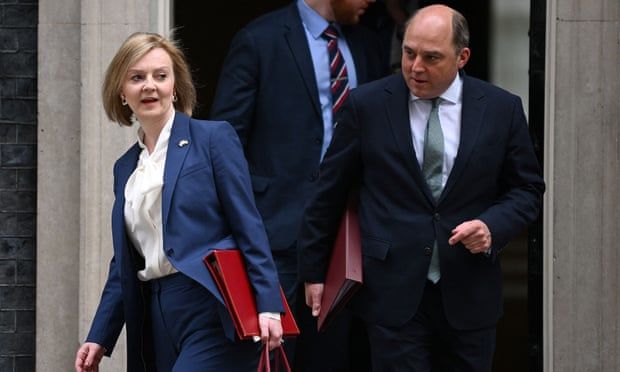 Ben Wallace says he wouldn’t be able to immediately spend extra cash promised by Tory leadership candidate
Ben Wallace has questioned the viability of a pledge made by Conservative leadership contender Liz Truss to dramatically increase the defence budget, warning that his department would not be able to make good use of the extra billions immediately.

The defence secretary, a favourite with the Tory grassroots, refused to say which of the three leadership candidates he would back, but appeared unenthusiastic about a Truss promise to lift defence spending to 2.5% of GDP by 2026 and 3% in 2030.

“If I was just given a blob of money tomorrow morning, I wouldn’t be able to spend it,” Wallace said on a visit to the Farnborough Air Show, in response to a question about whether he endorsed the foreign secretary’s pledge.

The Truss proposal would lift defence spending by a little over £10bn in four years from its current £48.2bn, based on figures supplied to the Guardian by the Institute for Fiscal Studies, and by another £12bn or more in the run up to 2030.

That would be over double the increase announced by outgoing prime minister, Boris Johnson, at the Nato summit last month, where he committed to raise defence spending from the current 2.1% of GDP to 2.5% from 2025 to the end of the decade.

Truss said overnight that the increased threat from Russia and China demanded an urgent response and that her proposals would make the UK “the most capable force in Europe” and she would look again at plans to cut the size of the army by nearly 10,000.

“We live in an increasingly dangerous world where the threat level is higher than a decade ago, and we need a stronger deterrent to face down those threats and ensure Britain leads on the global stage. Ultimately that requires more resources,” Truss said in an interview with the Times.

Wallace said he supported “any candidate who agrees we should more defence spending,” but argued that Britain lacked the industrial capacity to make the most of an immediate surge in funding. “You have to recruit people … you have to deliver, so I’m realistic about what you could do in the here and now,” he told journalists.

The defence secretary had been considered a strong contender for the vacant party leader role, before announcing that he did not intend to run. Since then Wallace has held back from endorsing any of the contenders, although hinted he would do so in the future. “Good things come to those who wait,” he added.

Truss’s pledge came as candidates had sought to woo the 31 supporters of Tom Tugendhat, a former Territorial Army reserve officer, who had also promised to lift defence spending to 3% of GDP. It helped Truss gain 15 votes on Tuesday, nearly half of the pool available.

Race frontrunner Rishi Sunak, the former chancellor, has refused to recommit to the 2.5% pledge – despite agreeing to it when in government. Instead he has described the existing Nato target of 2% as “a floor, not a ceiling”.

The third contender, Mordaunt, a former defence secretary and Royal Navy reservist, has previously promised to stick to Johnson’s Nato commitment to increase defence spending to 2.5% of GDP by 2030. But she gained only 10 votes from Tugendhat and was only 6 votes ahead on Tuesday night.
#Boris Johnson  #Johnson
Add Comment