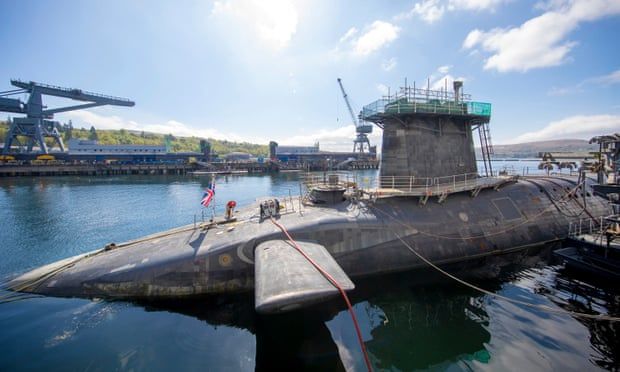 Defence review: UK could use Trident to counter cyber-attack

Change to UK policy of using missiles only in response to nuclear, chemical or biological threats
Britain is prepared to launch nuclear weapons if the country was faced with an exceptionally destructive attack using cyber or other “emerging technologies”, according to the integrated defence review.

The stark statement marks a change from existing UK policy, which had been that Trident missiles could only be launched against another nuclear power, or potentially in response to extreme chemical or biological threats.

The new policy says Britain would “reserve the right” to use nuclear weapons in the face of “weapons of mass destruction”, which includes “emerging technologies that could have a comparable impact” to chemical or biological weapons.

It sets the UK in a different direction to the US, where the newly elected president, Joe Biden, had floated the idea during his election campaign of making the “sole purpose” of nuclear weapons to deter or if necessary to retaliate against a nuclear attack.

No further detail was spelled out in the document, published on Tuesday, but analysts said the shift in language was significant. Tom Plant, a director at the Royal United Services Institute thinktank, said: “This is clearly an indication that the UK government perceives the potential for some combination of novel technologies, in years to come, to rival existing WMD.”

Ministers said they believed a broader formulation was necessary to retain the credibility of the UK’s Trident nuclear deterrent, if a combination of “non nuclear” capacities were to “add up to an equivalent or commensurate threat”.

Discussion about Britain’s new nuclear policy unveiled by Boris Johnson, reversing 30 years of modest disarmament since the end of the cold war, dominated the publication of a 100-page integrated review of defence and foreign policy.

It confirmed leaks from Monday night that the UK would allow the cap on its nuclear weapon stockpile to rise to 260 from a target of 180 “by the mid-2020s” – and that the UK would abandon a second pledge to hold a lower number of operational warheads, previously set at 120.

But it led to accusations in the Commons from Sir Keir Starmer that the UK had abandoned previous pledges made by a succession of governments to reduce the nuclear stockpile with only the most cursory explanation.

“This review breaks the goal of successive prime ministers and cross-party efforts to reduce our nuclear stockpile. It doesn’t explain when, why, or for what strategic purpose,” the Labour leader told the Commons.

In response, the prime minister said: “It’s ridiculous for him to talk about our nuclear defences, Mr Speaker, when the reality is that Labour is all over the place.”

The last time MPs voted on Trident, Johnson added, both Lisa Nandy, the shadow foreign secretary, and Angela Rayner, Labour’s deputy leader, voted against. “And they want to talk about standing up for our armed forces,” Johnson said.

Defence sources said the decision to lift the warhead cap by over 40% was motivated by a desire to be more assertive about nuclear weapons. “If we have them, let’s not apologise for it, let’s own it,” an insider added.

The prime minister also confirmed that MPs will not get a vote on the government’s plans to slash aid spending to 0.5% from 0.7% of GDP, because, he said, the dramatic cut is intended to be temporary because of the impact of the pandemic.

In the debate on the review, former shadow international development secretary Andrew Mitchell warned Johnson that he was at risk of setting an illegal budget if it did not meet the legal obligation to spend 0.7% of gross national income (GNI) on aid.

Calling on Johnson to bring the aid cut to a vote in the Commons, Mitchell said: “Otherwise, he may be in danger, as from the start of the new financial year, of creating an unlawful budget.”

The document also set out the UK’s post-Brexit diplomatic policy, with the prime minister highlighting the US as the country’s most important ally while using carefully calibrated language about China – to the disappointment of Beijing hawks on the party’s backbenches.

Johnson told MPs that “China will pose great challenges for an open society such as ours”. He said the UK had expressed “deep concern” over the “mass detention” of China’s Uighur Muslim minority and its Hong Kong crackdown but insisted it was necessary to “build a stronger and positive economic relationship and address climate change”.

Former foreign secretary Jeremy Hunt said he was concerned about the review’s language on China. “I am worried about designating China simply as a systemic challenge given the terrible events in Hong Kong and Xinjiang, so will he keep this under review?”

The prime minister also said he would visit India next month, rescheduling a summit with the prime minister, Narendra Modi, from January that had been delayed because of the surge in coronavirus cases in the UK at the beginning of the year.
#Joe Biden  #Coronavirus  #Boris Johnson
Add Comment