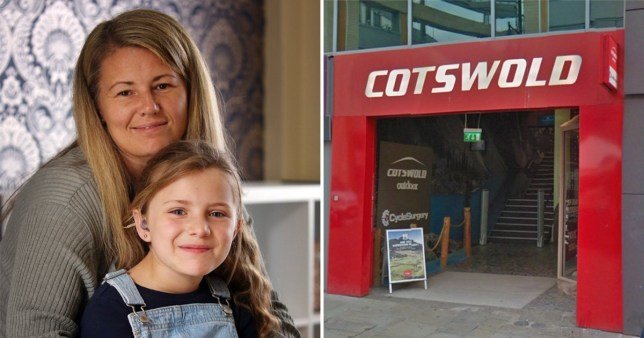 The mum of a deaf girl claims they were ‘turned away’ from a store for not wearing face masks after staff demanded ‘paper proof’ of her disability.

Julie Muller, 41, and daughter, Sadie-Grace, 8, are exempt from wearing face-coverings as they lip-read to communicate.

The mother pointed out to staff that Sadie-Grace was wearing hearing implants on her head when they were stopped outside a Cotswold Outdoor shop in Newcastle on August 8.

However, she was left ‘heartbroken’ after being turned away, and fears the incident will affect Sadie-Grace’s self-confidence in the future.

Ms Muller said she was stopped at the entrance by a worker who asked where her mask was.

She said: ‘I said: “I’m exempt because my daughter’s deaf and she needs to be able to read my lips.”

When asked for proof of the disability, Julie replied: ‘You can have a look on her head.’

She added: ‘I embarrassed my daughter. I showed her the implants on her head.’

But the employee allegedly replied: ‘That’s not good enough, I need paper proof’.

A shop manager also initially refused to give Julie and Sadie access – before allowing them in, but warning they would not be served without a mask ‘due to company policy’.

Cotswold Outdoor has claimed Julie and Sadie-Grace were ‘welcomed’ inside after Julie explained why she was unable to wear a mask.

The company confirmed staff were unable to ‘provide any full close-contact services’.

However, mum-of-three Julie has made a complaint and has vowed to ‘never set foot back in that shop’.

She said: ‘What was heartbreaking was Sadie asked her dad, “Am I not allowed in the shops because I’m deaf?” I had to explain it was not because she’s deaf, it’s because I need the mask.’

Cotswold Outdoor said in a statement it has stopped asking customers for proof of exemption. It is now following up the incident ‘as a priority’.

A company spokesperson insisted it had been ‘conscientious’ in implementing guidance on facemasks as ‘sensitively as possible’.

The mum has made a complaint after visiting the shop

They said: ‘With regard to this particular situation my understanding is that the customer, but not her daughter, was initially asked to wear a face covering when entering our Newcastle store.

‘As soon as the store manager was made aware that the customer needed her daughter to be able to see her mouth to lip read, the manager welcomed the customers into the store without requiring them to wear a face covering.

‘However, he did explain that we wouldn’t be able to provide them with any full close-contact services such as boot fitting, at that time.’