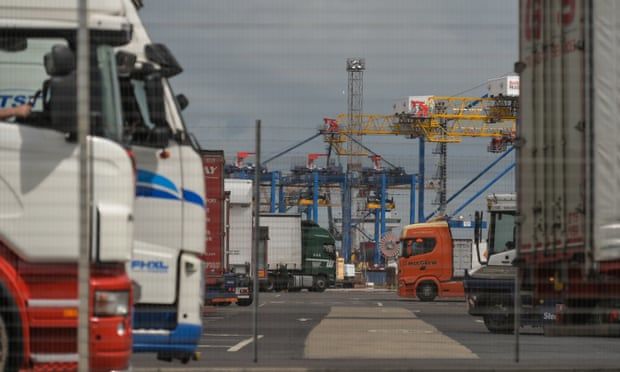 Minister says government will not ‘sweep away’ NI Brexit protocol, but renews demands for major changes

The UK will not “sweep away” the Northern Ireland Brexit protocol, despite renewed calls for its abolition by the Democratic Unionist party, the Brexit minister has said.

However, David Frost renewed his demands for fundamental changes on its implementation, warning the row could have a long-term chilling effect on wider EU-UK relations unless it was resolved.

“I worry that if we didn’t solve this issue, it is capable of generating the sorts of cold mistrust which will last between us and the European Union, and [the mistrust] will spread across the whole relationship [and] will hold back the potential for a new era of cooperation between us in a world which does need us to work together,” he said at the British-Irish Association conference in Oxford on Saturday.

The row over the protocol, known in some quarters as “sausage wars”, blew up within days of Brexit being enforced in January, with barriers imposed for the first time for trade of food, plants and medicines from Great Britain.

But with talks set to resume, Lord Frost told the meeting of senior public figures that triggering article 16 and suspending the protocol was not his preferred option, even though the “threshold” for such a move had “been met”.

“Some would like us to sweep everything away. That’s not our position,” Frost told delegates.

He called on the EU to engage seriously with proposals for radical changes to the protocol published in a UK government command paper in July, arguing “the proposals do not remove it [the Northern Ireland protocol]” and actually “retain controls in the Irish Sea for certain purposes”.

He said society would not forgive either side if they did not make the “small muscle movements” needed to make the protocol work.

“When one looks at the price [of failure or success], and sets it against other challenges that we face in Covid recovery, and Afghanistan, one wonders what future generations would say” if the impasse is not broken.

“We have no interest at all in having a fractious and difficult relationship with the EU,” he said.

Frost was speaking hours after the Irish prime minister said at the same conference that unilateral moves by the UK would always be doomed to failure, arguing that history showed partnerships were the only route to success.

Talks over implementation of the protocol have continued between officials in London and Brussels over the summer but senior sources say engagement is “slow” and it is unlikely an agreement will be reached by 30 September, indicating talks will extend into the winter months.

Frost said the protocol had to be modified to recognise “two sovereign and autonomous entities, not a relationship of subordination or one where one party’s rules have to be applied mechanically by the other”.

The Northern Ireland secretary, Brandon Lewis, told the same conference the UK was powering ahead with plans to “level up” Northern Ireland by announcing a £730m investment into the new Peace Plus programme “to support economic stability, peace and reconciliation in Northern Ireland”.

He spoke about the economic successes of the region, including the development of a large cybersecurity sector employing 2,300 staff, but said overall it still “punches well below its weight” with pockets of “unacceptable levels of deprivation” and much more to be done on segregation in schools, with just 7% of children benefiting from “integrated education”.